‘Fully Loaded’ – This is the second part of the Chiappa Firearms Little Badger Folding Survival Rifle Review, and follows on from Part 1 which introduced this handy little gun. In Part 2 I’ll be covering more details of the Little Badger accessories, how they fit and perform, and a nice modification that, for me, transformed this rifle. 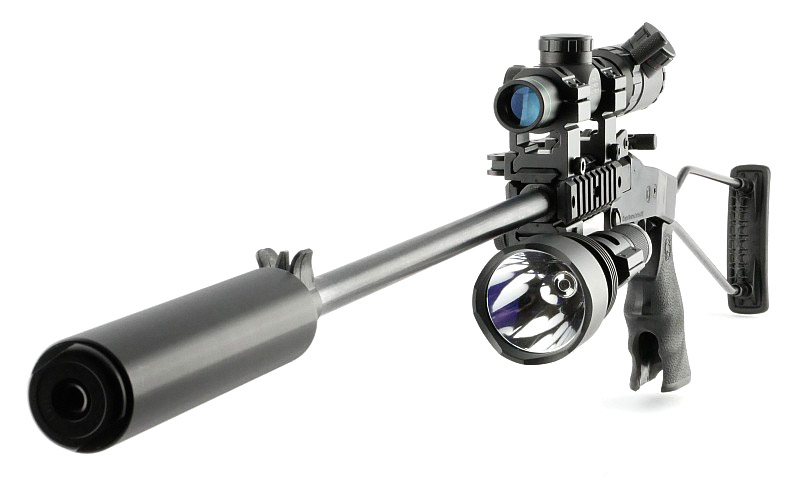 The accessories in detail:

Keep an eye out for the comments on each image. Some of the key points to look out for are:

The effect add-on handles have on folding the rifle, and how easy they are to fit and remove.
A compact scope (from In Your Sights) really does make all the difference in sighting.
Subsonic .22LR plus a moderator really makes for a great combination.
The hammer extension, which seems such a great idea to improve ease of cocking the hammer, might not work as well as hoped.

This gallery will show how they all fit together.

Bringing it all together:

So far the photos have been from an initial studio shoot, but now we are moving onto areas which are being re-visited based on using the Little Badger, plus a game changing modification of one of the accessories.

That modification is of the pistol grip – check the gallery for more.

Taking the fully loaded (in terms of accessories) Little Badger for a few range sessions resulted in some unexpected troubleshooting (pun intended)!

Knowing how different guns seem to prefer different ammunition, sometimes not the ‘best’ quality ammo, I went with a selection of usually reliable options.

Comfort and stability were all good, but I found myself struggling to get my test groups shot, as there were SO many misfires. Change ammunition, try again, check the firing pin and hammer, try again.

Normally after waiting for a potential hang-fire, I rotate a misfired round so the firing pin can strike a fresh part of the rim. In some cases I did this six times. With the external hammer, I could of course simply re-cock it and go again without opening the action. This turned out to be the way to get a reliable ignition on all misfires.

This second strike also led me to the misfire being due to a light-strike. Why though? After considering all the options it seemed that possibly the extra weight of the hammer extension might be slowing the hammer speed and reducing the inertia of the hammer striking the pin. OFF with that extension and ON with the shooting. Every strike was now a reliable ignition. A pity, but at least the Little Badger was not at fault.

With the open sights and their limited adjustment, the accuracy was limited too. It felt that the 25yd range would be the most I would take on a live target. With the (max 4x magnification) scope fitted, 50yd would be a comfortable rabbit range, but with the results of the paper target grouping, I would not be happy extending this out to 100yds.

Trigger pull was very good considering the price of this gun. Not quite a glass rod breaking, but smooth, consistent and a good weight. Taking an average and carefully measuring using a force gauge and custom trigger hook, this trigger is breaking at 2.3 lb. 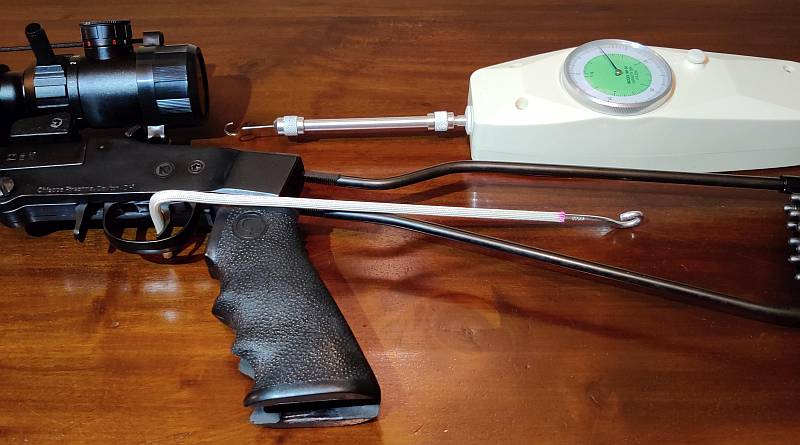 One of the complete joys with this rifle is how easy it is to carry. There are definitely days when I’m not really on serious vermin duty, so might not want to bother taking my usual semi-auto, but the Little Badger comes along without any stress.

Using this excellent little gun also proved to me that if that ‘prepping’ type scenario were to come about, this is the gun I would grab. It is not weighing me down much and the ammo goes a long way. Easy to carry, compact, simple and reliable (without that hammer extension).

Of the two options, the serious pistol grip is actually a grip made for the Chiappa MFour Semi-Auto rifle. This is the reason it gets in the way of the folding action, it was not actually designed for the Little Badger, but is simply a tried and tested grip that certainly improves the handling.
Making this existing MFour part into a grip specifically designed for use with the Little Badger and allows the full folding action is that transformative modification.
By cutting a slot into the pistol grip I have allowed the rifle to still fold fully. WHAT a DIFFERENCE that pistol grip makes to the handling of the gun. It adds so much stability and control over the bare rifle I would not think twice about having it fitted. If you can make the same modification I highly recommend doing it.

Not my normal #edc type of post, but going a littl

The magic of fire courtesy of @extrema_ratio_offic

Finally been able to take some time with the stunn

Are you ready for @iwa_outdoorclassics Studio Edit