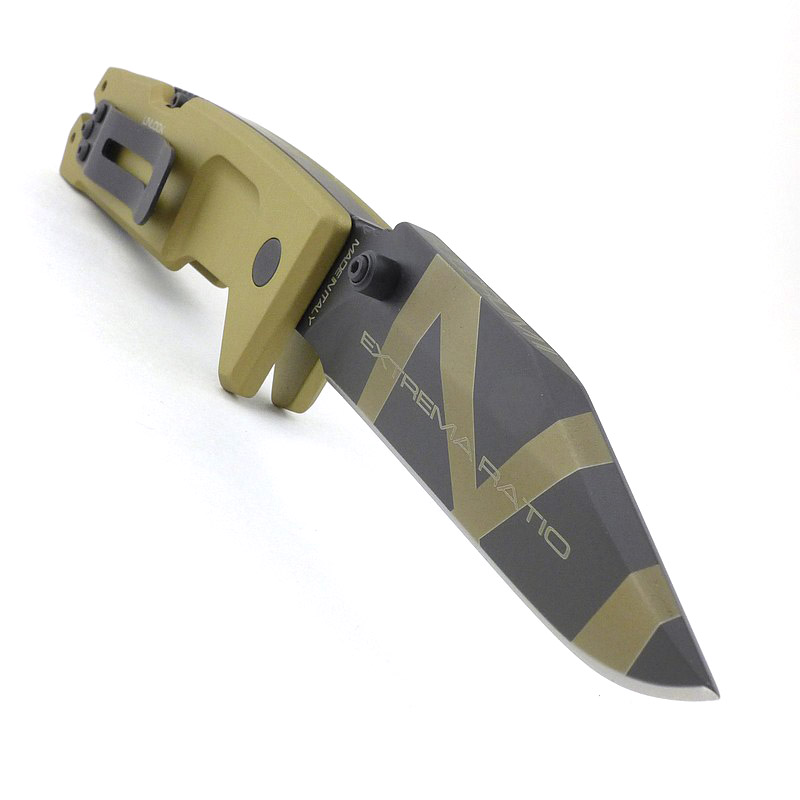 Extrema Ratio have built a reputation for making super strong knives; in this review of the Fulcrum II D ‘Heavy Folder’, we are taking that detailed ‘Tactical Reviews look’ at this re-launched folding knife. ‘Overbuilt’ is often used to describe knives with heavy construction, but is not how I would describe Extrema Ratio’s Fulcrum II. ‘Overbuilt’ suggests excessive design, but behind every Extrema Ratio design is a purpose and intent to give the owner confidence in a tool that won’t let them down. Initially I was sceptical – would the build of the Fulcrum II hamper its usefulness? But it has surprised me; read on to find out more. 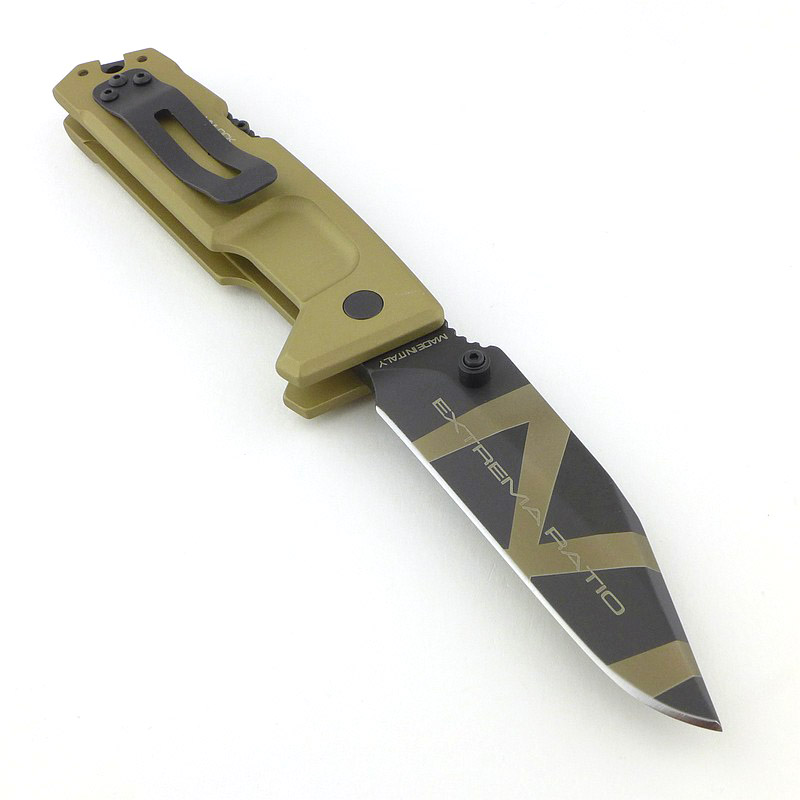 A good look round the Fulcrum II – Things to look out for here are:

As you look round the Fulcrum II you will see how the design has been kept simple yet functional and how solid every part is.

There are other knives that have a secondary lock to secure the main lock of an open folder, and there are assisted-openers that have a safety lock to prevent the blade springing open in your pocket, but I have yet to come across another folding knife with a secondary lock quite like the one on the Fulcrum II.
A back-lock mechanism uses the lock-bar’s spring to hold the blade in the folded position and then to keep the lock engaged when the blade is open. The lock-bar needs to move to allow the blade to open and close.
In the Fulcrum II, there is a secondary manual lock that locks the lock-bar itself, preventing from moving at all. This means if the blade is closed, it cannot be opened, and if opened the lock cannot be released to allow it to fold. This single secondary lock can secure the blade in either the opened or closed position.
As this is not something that would be obvious to everyone, one use-case for this is to prevent someone taking the folded knife off you and then using it against you (unless they know). The more likely use being to effectively make the folding knife a fixed blade knife ensuring that it cannot be accidentally closed. 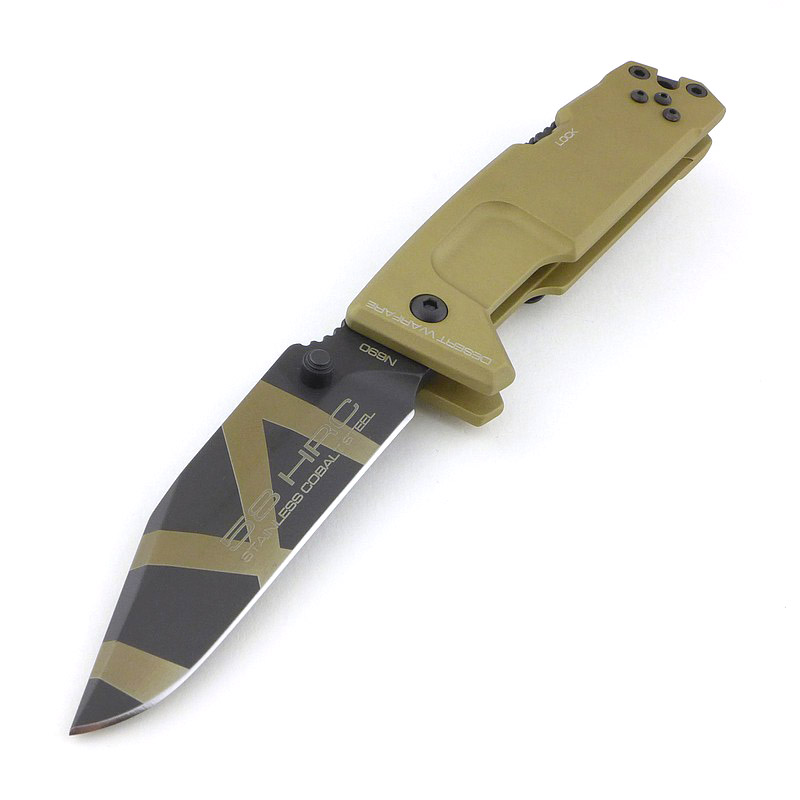 The following text is from Extrema Ratio’s own product description.

This model is the evolution of the FULCRUM Folder (out of production since 2005), the first folding knife produced by Extrema Ratio according to the specifics of an Italian counter-terrorism unit. The FULCRUM II is basically identical to its predecessor, the only variations being the addition of a reversible clip and a partially lowered surface on the handle which improves the ergonomics and makes operating the opening pin easier. A manual security lock holds the BACK-LOCK mechanism lever, preventing accidental unlocking of the blade block during heavy-duty use. It can also be used to lock the knife closed in the event it’s taken away from the user: then the FULCRUM cannot be opened, even if the mechanism is often irrevocably damaged. The back of the flat-ground blade offers a comfortable resting point for the thumb. The tempered steel tang can be used as glass breaker and is provided with a hole to affix a security cord. Available versions: FULCRUM II D BLACK, FULCRUM II D DESERT WARFARE, FULCRUM II D BLACK RUVIDO, FULCRUM II T BLACK, FULCRUM II T DESERT WARFARE, FULCRUM II T BLACK RUVIDO.

The first table in this gallery shows the standard review measurements, however, this is one of the first reviews on Tactical Reviews to feature a new measurement. Using the Edge On Up Structural Edge Tester (SET) to measure the resistance of a knife’s edge to rolling.

Before I could really appreciate the Fulcrum II, the edge needed reworking. Embarking upon this revealed a few things you should be aware of.

The factory edge was very steep, a total inclusive angle of 64 degrees. Taking the BESS sharpness measurements with an average score of 409,and a small thick blade, you have a less than eager cutter. Should you wish to use it as an extraction tool and cut through metal sheeting and pry with it, this edge will quite likely serve you well, but I wanted to know if this knife would also serve for daily tasks.

With such a thick blade and a primary blade grind at 21 degrees my intention was to take the edge angle to 40 degrees inclusive. I’d generally take a pocket knife to 30 degrees inc, but this is not a normal pocket knife and the edge bevel would be getting a bit too wide.

So, check this first photo in the gallery and you will see that the thumb stud creates an angle of about 53 degrees in relation to the edge bevel, making sharpening to anything less than this difficult. The only option is to remove it. Thankfully Extrema Ratio have made the thumb-stud removable and provided the Allen key for it, so no problem there. However, remember that the blade-stop in the closed position IS the thumb-stud, so once you take it off, don’t go closing the blade or you will undo all your hard work.

The major edge bevel angle change was carried out with a small belt grinder. It was taken to a burr and stropped to remove the burr, but I could never quite get it as sharp as I wanted. This might be that the belt needs changing, but before confirming that, I just moved onto a DMT Aligner kit and got the edge shaving sharp. The new edge bevel is significantly wider than the factory edge bevel, especially at the tip (about 4mm wide), so it does change the look somewhat.

In all honesty, on first starting to use the Fulcrum II with the factory edge, I was underwhelmed and thinking I now had an overly heavy folder that was not much use to me; despite having a very satisfying presence. However, the 20dps (degrees per side) edge has totally transformed the Fulcrum II. I cannot recommend enough just putting this edge angle on it straight out of the box.

Changing the edge angle to an inclusive 40 degrees makes this a properly usable knife. You can now appreciate its substantial feel and operation along with its, now useful, cutting performance.

Despite this new edge bevel angle transforming it, the Fulcrum II does still have a very thick blade. It is never going to slice like a thin blade – but who cares?! That clunk of the lock as you open it, the handle size and ergonomics – you know you are holding heavy duty metal.

Ergonomics are good and functional even with the angular look. Thumb-stud opening is firm but not stiff. If anything is over stiff, it is the back-lock spring. Unlocking the blade is quite tough, and I need to change grip specifically to one where I can apply maximum force to the lock – I can’t see this ever releasing accidentally due to a firm grip.

I do find the secondary lock very satisfying. Perhaps oddly, I like locking it closed, keeping the blade safely folded and stopping curious people opening it. Then the secondary lock on the open knife making it close to a fixed blade. This extra level of certainty adding an extra dimension to the Fulcrum II. If I were to express a minor doubt, it is the amount of engagement of this secondary lock. The secondary locking button overlaps the handle slab (to create the block) and does so with less than 1mm of overlap. Enough to function, but not quite in fitting with the solidity of everything else.

Putting it to woodworking duty, the Fulcrum II was a pleasure to use. I didn’t want to stop carving. The new edge bevel, being quite wide, gives it a semi-scandi effect and it was just eating up stick after stick. I did remove the pocket clip as, for me, this significantly improved the ability to work with it for extended periods.

This knife demands attention. Attention simply due to its build and presence, and the attention you need to give it to get it set up right, as you will need to put that proper working edge on it to be able to appreciate it. I like big and heavy folders as long as they can be put to real work – exactly what I’ve been doing with the Fulcrum II. 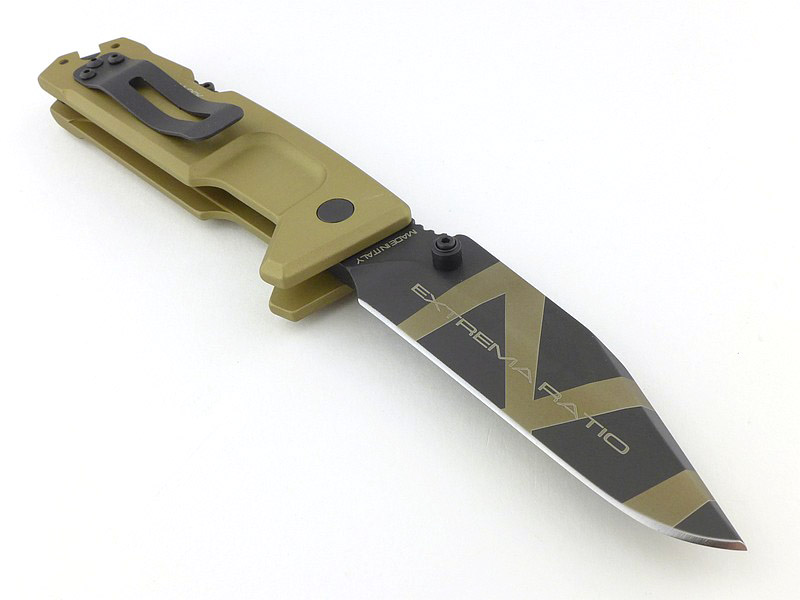 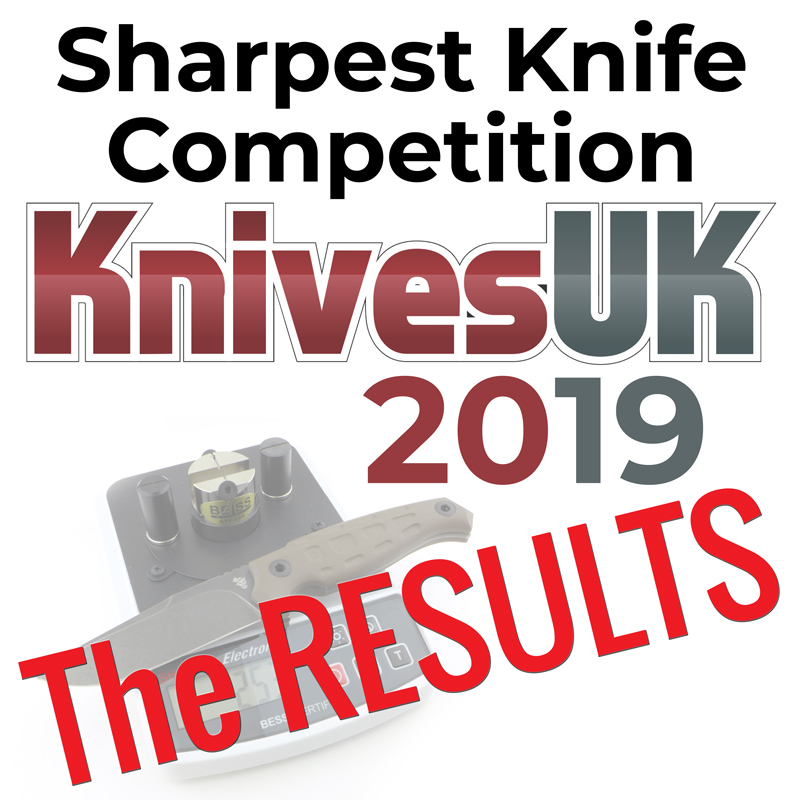 After its debut at Knives UK 2018 (where eyes were opened, hopes dashed, legends toppled, and shock results revealed), the quality of entries for the Sharpest Knife Competition 2019 noticeably improved.

Drama and enlightenment added to a day of excitement at Knives UK 2019, with the vast array of beautifully hand crafted knives and tools, what more could you ask for? 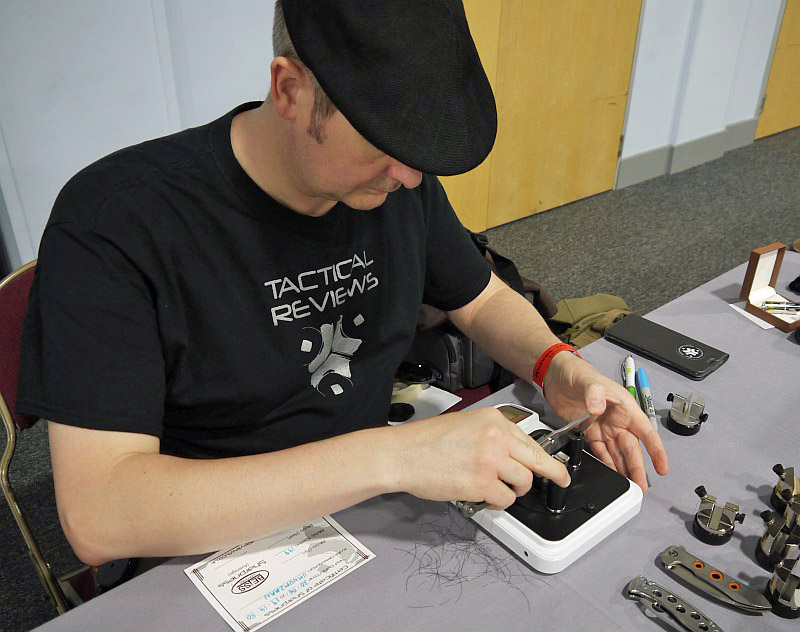 In case you were not able to come along, the competition table was setup in the ‘social/display’ area of the show. 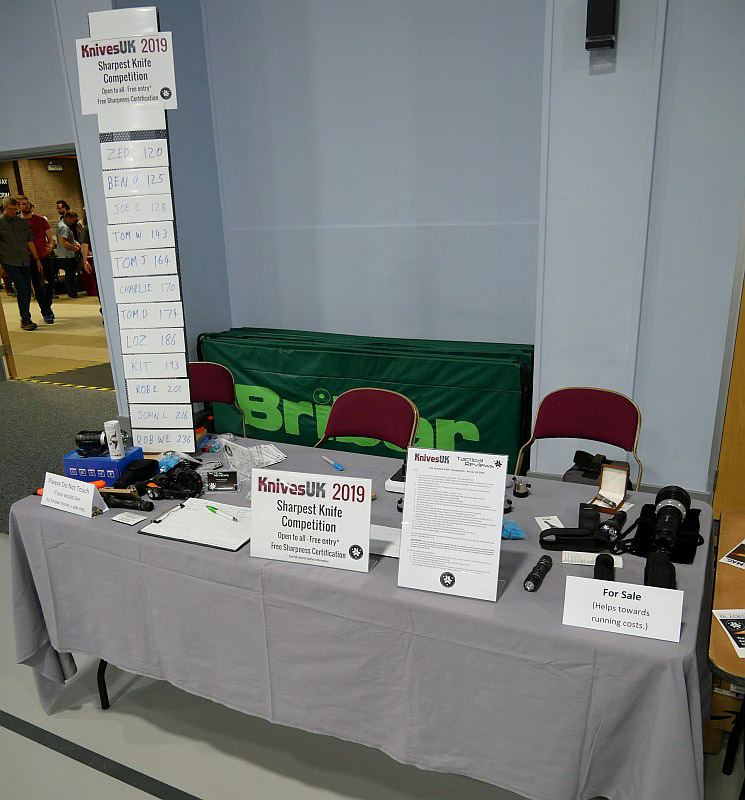 The Competition In Progress:

A few photos of the competition measuring in progress.

And the Results – an impressive quality to the entries with the overall second place score thanks to a superb BESS score of 51!! A typical double-edged razor blade fresh out of the packet scores 60, so this is very impressive. 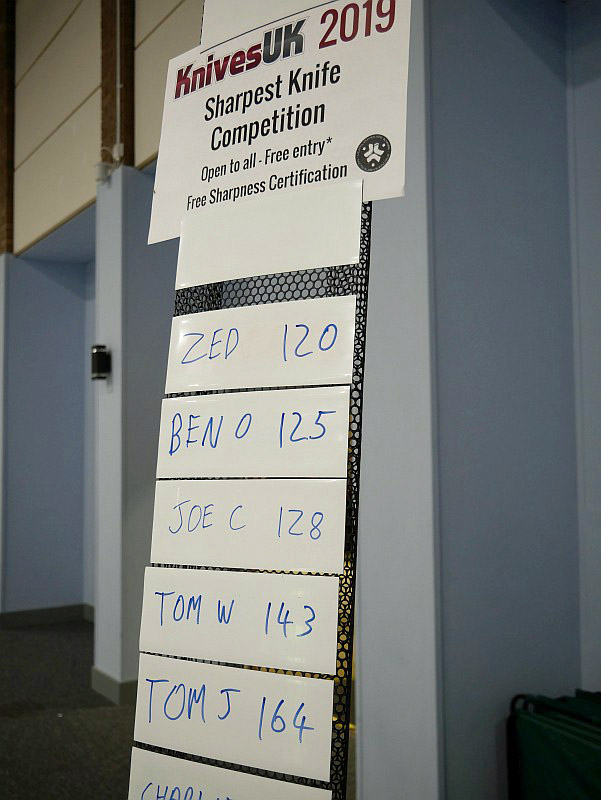 One feature of the @leathermantools Raptor I did n

December 4th was the official release date for "Th