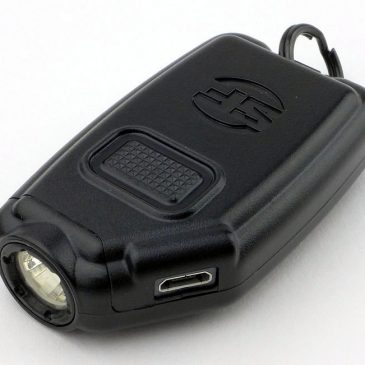 Though not the first to make a USB rechargeable keychain light, Surefire have applied their philosophy of ‘excellence in illumination’ to this EDC essential. 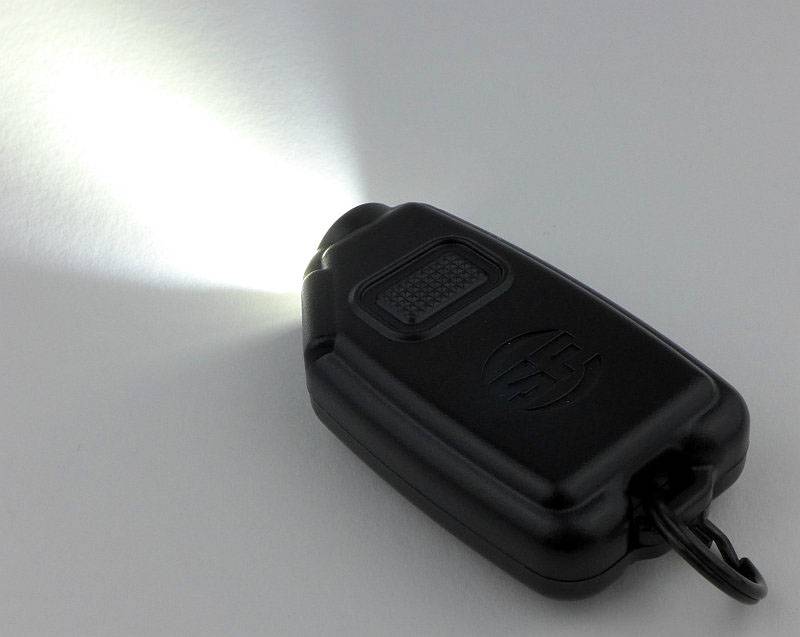 The Sidekick comes in a cardboard blister pack. 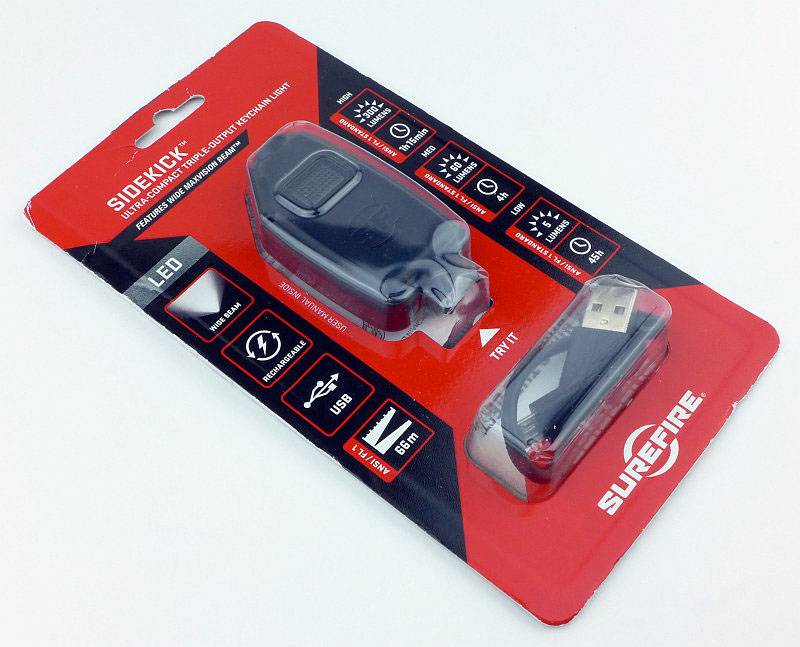 Inside is the Sidekick itself, a short USB charging cable, a metal clip and the instructions. 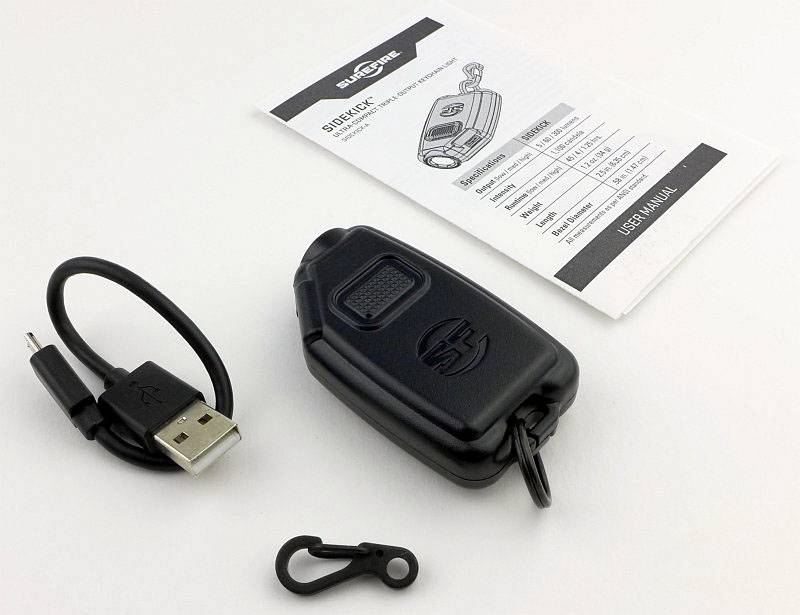 The underside of the Sidekick has a metal heat sink panel with the model engraved onto it. 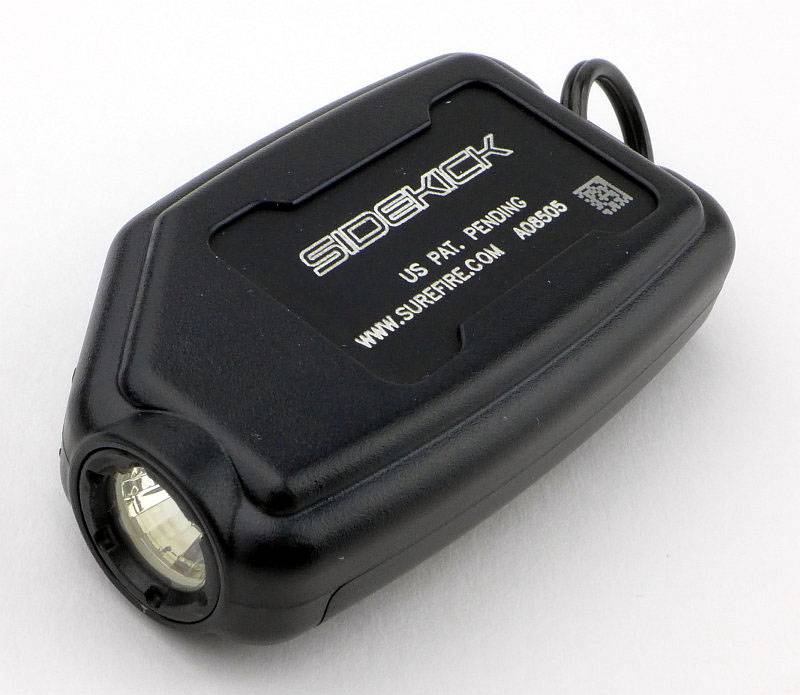 At the top is the power button and a moulded Surefire logo. The main body is a tough plastic and has a split ring at the rear. 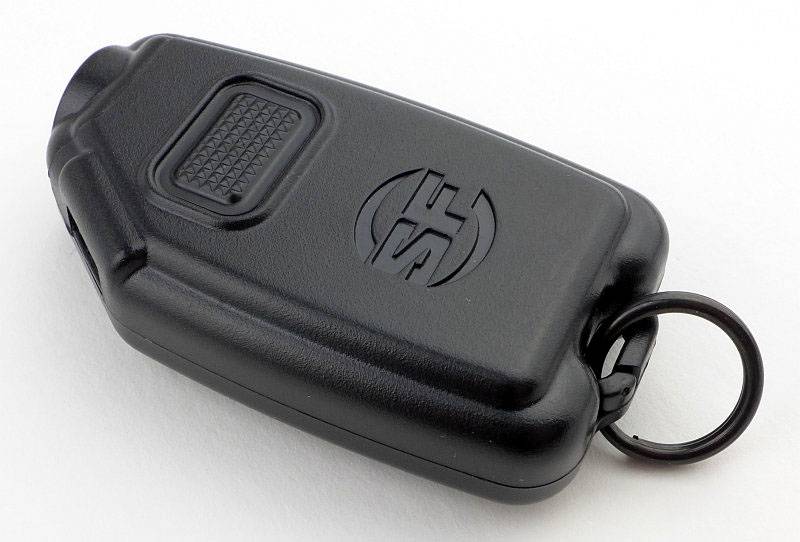 On the angled corner at the front you can see the micro-USB port for charging. 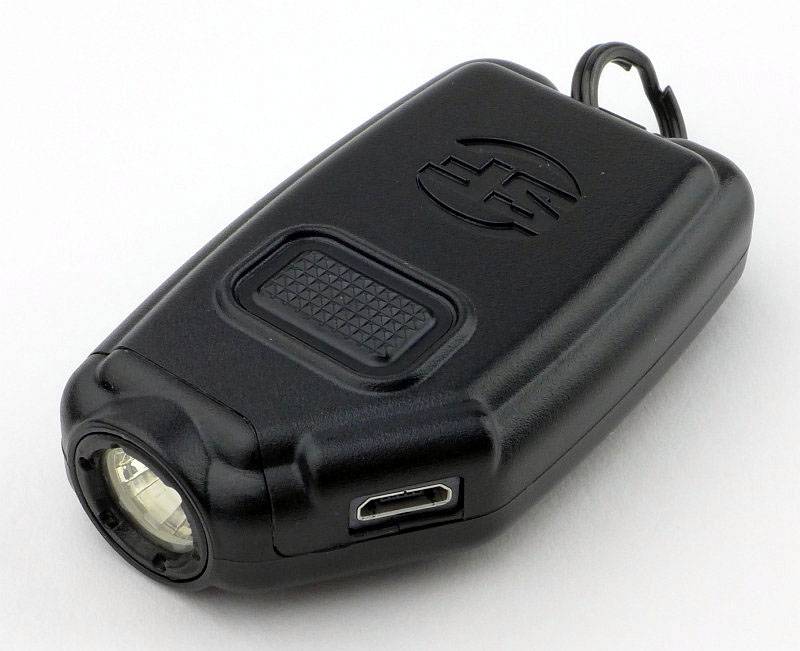 I only noticed the small piece of plastic case under the micro-USB port was cracked when I was preparing these photos. This has not affect the function at all. 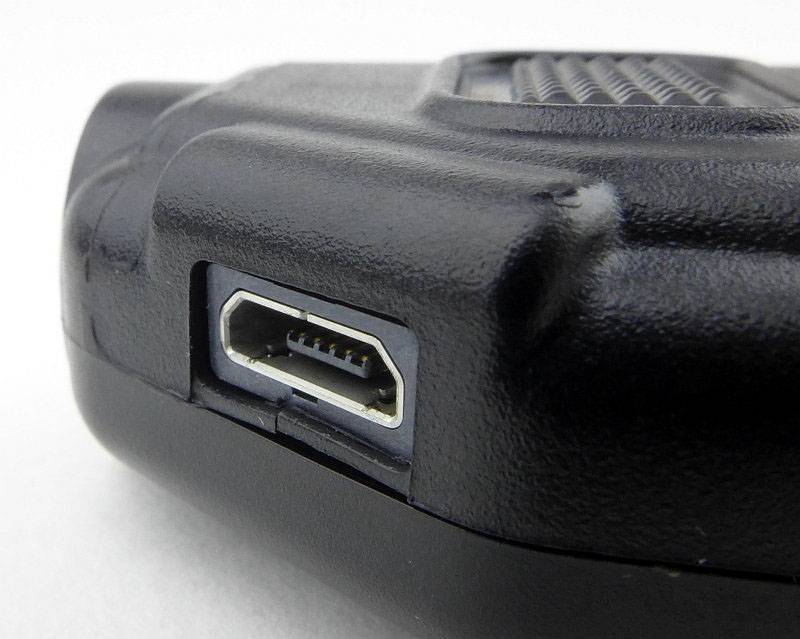 Set into the front is Surefire’s MaxVision Beam reflector assembly. This has a multi-faceted reflector surface to smooth out the beam without the losses of a textured reflector. 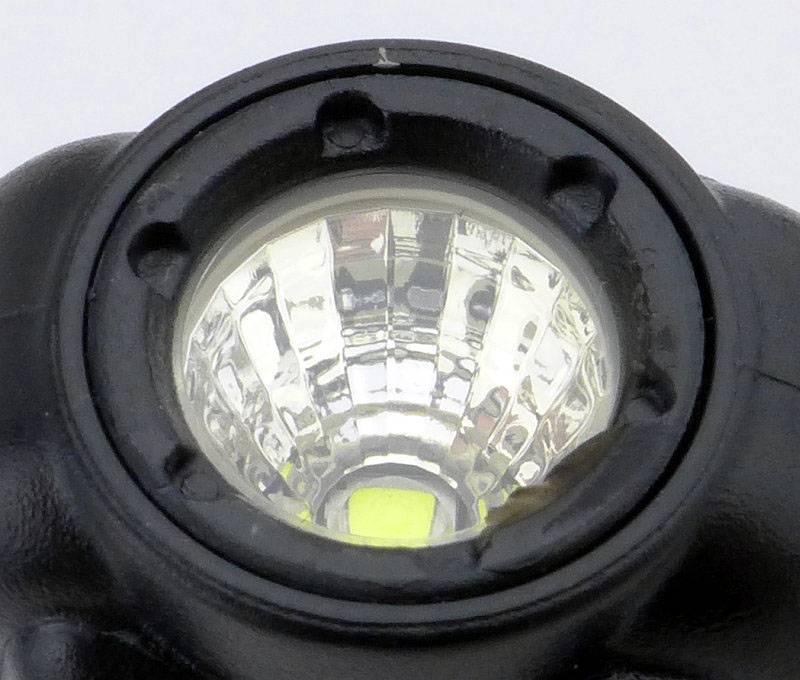 Looking straight into the faceted reflector at the Cree XP-G2 LED. (For some reason Surefire don’t specify the actual LED anywhere in the documentation.) 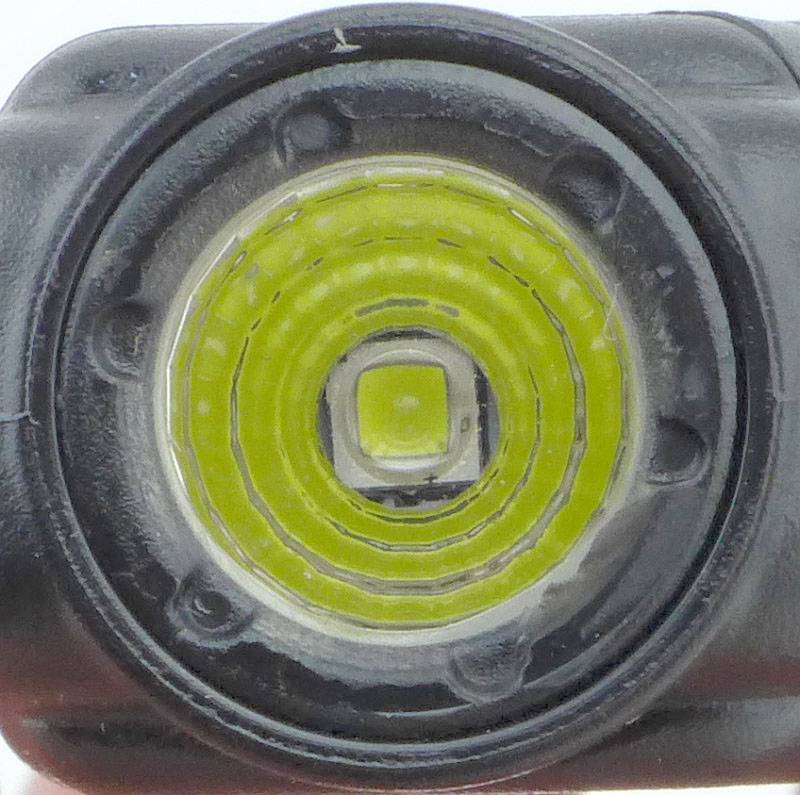 Plugging in the micro-USB cable to charge the Sidekick. 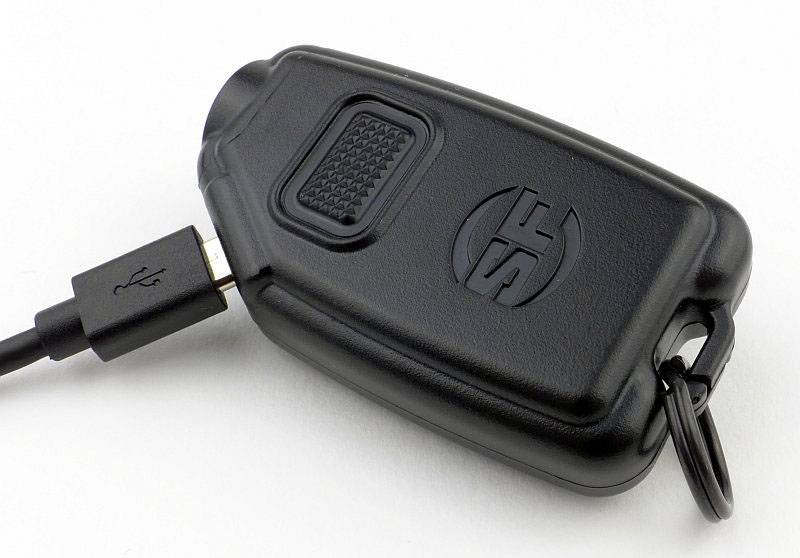 Even the compact metal clip has ‘SF’ on it. 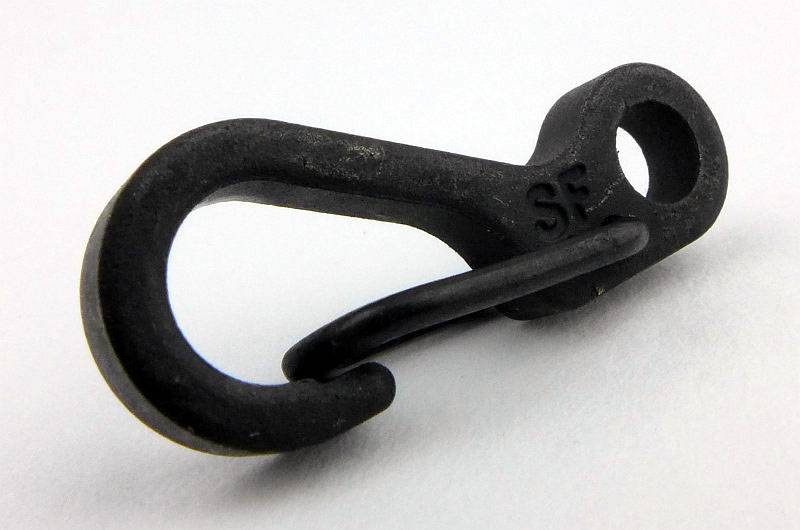 The split ring is very stiff, so getting the clip on isn’t easy, but its not going to come off by mistake. 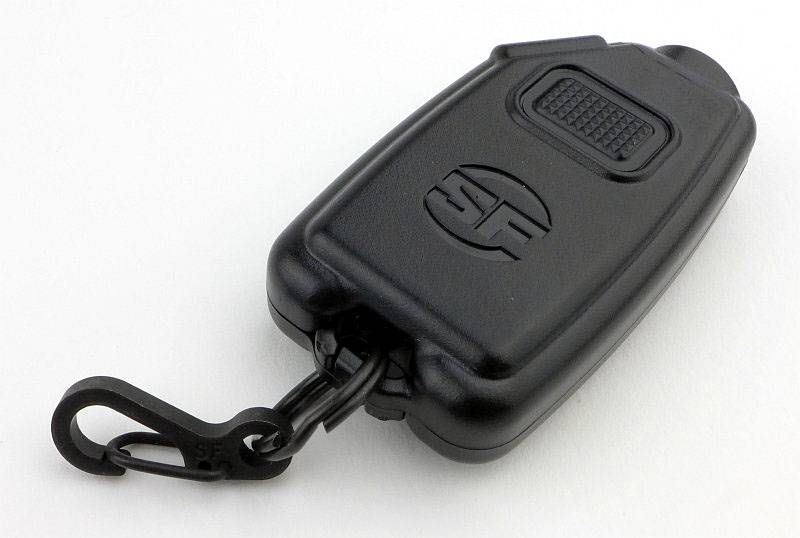 Since the days of the Solitaire keychain light, I’ve always had a compact EDC light on my keys. This shrunk to the photon size button cell type, but those really only served as a last ditch light, so the size I used grew again to include a USB rechargeable or AAA powered light. The beam of the Sidekick is a revelation in keychain lights, with its wide floody beam (with no glare) and plenty of power.

Just look at this beamshot and you probably think we were looking at something you wouldn’t attach to your keys. A really excellent EDC beam. 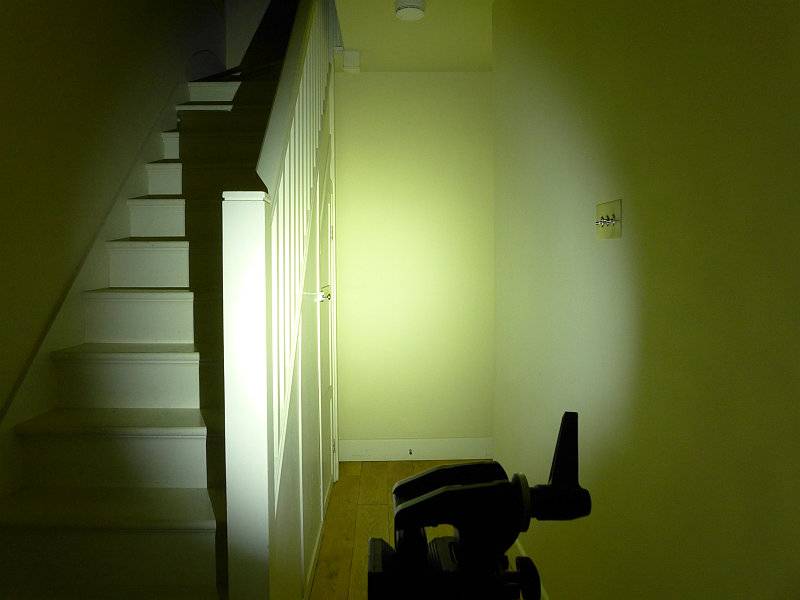 The Sidekick has three output levels Low, Medium, and High.
From OFF, press the power switch to select Low, press again within 2s to change to Medium, press again within 2s of the last press to get High, and once more cycles to OFF.
If you are using either Low or Medium, if you wait over 2s before pressing again, the Sidekick will turn OFF (instead of going to the next mode and then OFF).

There are no indicator lights on the Sidekick, so no charge or low battery indicators. Instead the Sidekick uses its main LED. For low battery, the output simply reduces sharply to a lower level and starts to fade out. There is no sudden turn off, so while there is no actual ‘warning’ it is clear you are low on power.

For charging, the main LED is used as the indicator. With the USB power connected, the LED blinks to indicate the Sidekick is charging. During the charging process the LED sometimes comes on steadily for a few seconds then has a series of blinks. I’ve not so far managed to determine if there is an actual pattern to this. Ultimately, once fully charged the main LED comes on steadily at the low level and stays on as long as power is connected.

The default order of the modes is L-M-H, but this can be reversed to H-M-L by carrying out the following steps:

1. Plug in the charger.
2. Press the switch three times until the High level is activated.
3. Leave the Sidekick On for 5 seconds or more, then press the switch once to turn Off.
4. Unplug from the charger and test the sequence.

To return to L-M-H, repeat the previous steps except in step 2 you press three times to activate Low.
(Stopping on Medium at step 2 does not do anything.)

The Sidekick runs on a built-in 640mAh Li-ion battery.

Surefire have commented that the charge rate is fixed around 450mA, but it always seems to charge faster than the instruction manual, or this information, would suggest. In my experience (with a good charger) even fully depleted, it takes less than an hour to charge.

There is parasitic drain but as the light is sealed this could not be measured. During normal use over a period of over 6 months, the Sidekick has never noticeably self drained.

For such a compact lightweight light, the Sidekick has a fantastic performance on High. Not fully regulated, the output does however remain above 250lm for a full 45 minutes – very impressive for a keychain light. 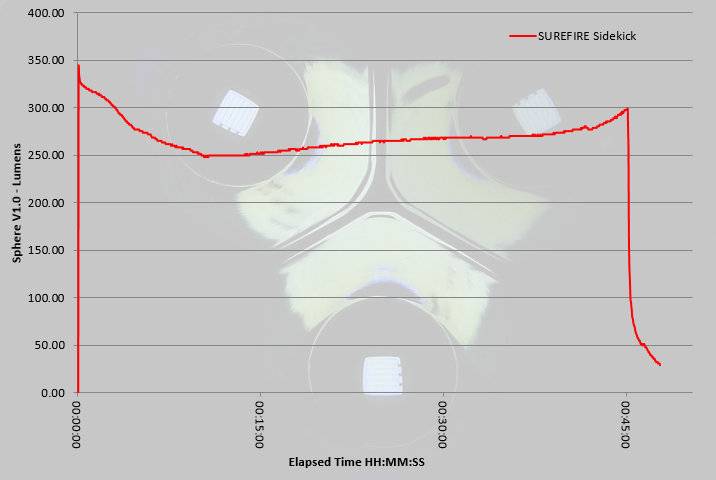 The Sidekick in use

Though it is compact, the Sidekick is relatively large for a keychain light. It gets away with this thanks to not being heavy and the plastic housing seems to help reduce its overall presence. Here it is shown next to a AAA keychain light and a photon button cell light. 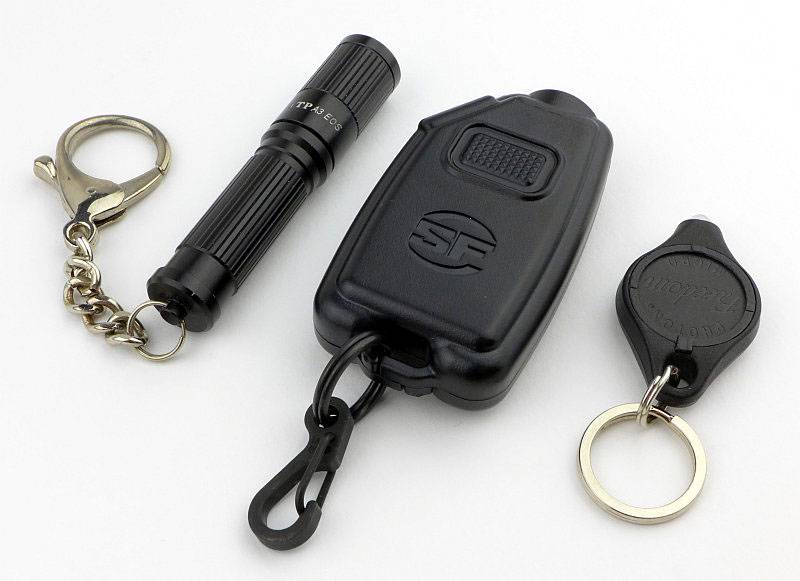 With this extra size and relatively high cost (compared to its rivals, and especially in non-US markets), the Sidekick needs to work well to justify itself. The excellent beam and 300lm output do just that.

Ideally I prefer a smaller keychain light, but the extra size does make it more stable to hold, and you just don’t get that kind of output and runtime from something smaller and lighter.

If the housing were 100% plastic there would be heat issues, but Surefire have used a metal side panel which allows it to conduct heat out of the Sidekick. When using the High output this can get quite hot to the touch.

Perhaps the biggest annoyance for me has been that it is very similar in size to my car key, and when reaching into my pocket I now have to do the ‘pocket juggle’ of my keys to identify if I’ve grabbed my car key or the Sidekick.

The power button is quite stiff and has little feel to the click. The stiffness is an advantage in not having accidental activations (none so far, which I cannot say about other keychain lights), and eventually you do get some feel for the subdued click.

Not being a tactical light, the modes being L-M-H is ideal as for general EDC you most often only need a little light. One disappointment is the use of visible PWM in the Low mode. Medium and High have no PWM, and if only that Low mode was the same it would be much better.

Battery capacity is really great with the 640mAh cell always having plenty of output and runtime for everything I’ve thrown at it. Even with some unexpected night time strolls needing the path to be lit, using the full 300lm and plenty of other On/Off cycles to check things, and I’ve not needed to keep on recharging.

Recharging is one of those ‘love it or hate it’ things due to the main beam being used as a charging indicator. As it has never taken more than 1 hour to charge I haven’t needed to charge it overnight, so it is not that the main beam flashing and then going onto Low disturbs my sleep. However, the flashing can be annoying if you are in a room with lowered lighting. I was surprised by the Sidekick turning on the Low output once charging is complete, but actually it is a very clear indication that charging has finished, and even with a good charging circuit, it is never a good idea to leave any device on charge for a long time for no reason. The Sidekick tells you clearly to take it off charge. You can look at this either way, and to start with I thought it was not good, but having got used to it find it works pretty well.

The beam is very good, with a smooth floody profile and a neutral tint, which makes it so much better to use than lights with a 5mm LED or those with a more focused hotspot. This combined with the 300lm output, which is reasonably well maintained for a full 45 minutes of constant runtime, make this a really strong performer and the slight size penalty you pay is worth it.