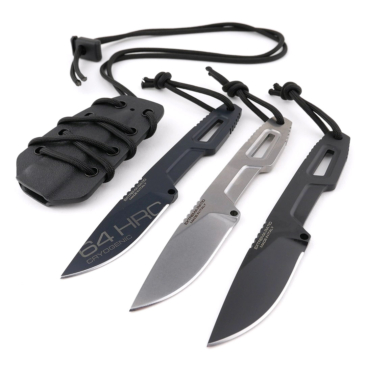 The Extrema Ratio Satre is a pocket-sized, light and extremely tough fixed blade knife, designed in collaboration with Daniele Dal Canto, a Master Advanced F.I.S.S.S. instructor. In this special report review of the Extrema Ratio Satre, I am able to carry out a special set of tests to quantify the edge apex stability (resistance to rolling) in a direct comparison of the two steels the Satre is available in, N690 and S600, as I have all three versions of the Satre available to test, the standard Black and Satin (N690) and the S600 version at an super hard 64 HRC. This special report also include two videos, an overview and detailed measurement, plus one showing the steps of the edge stability testing (SET – Structural Edge Testing). 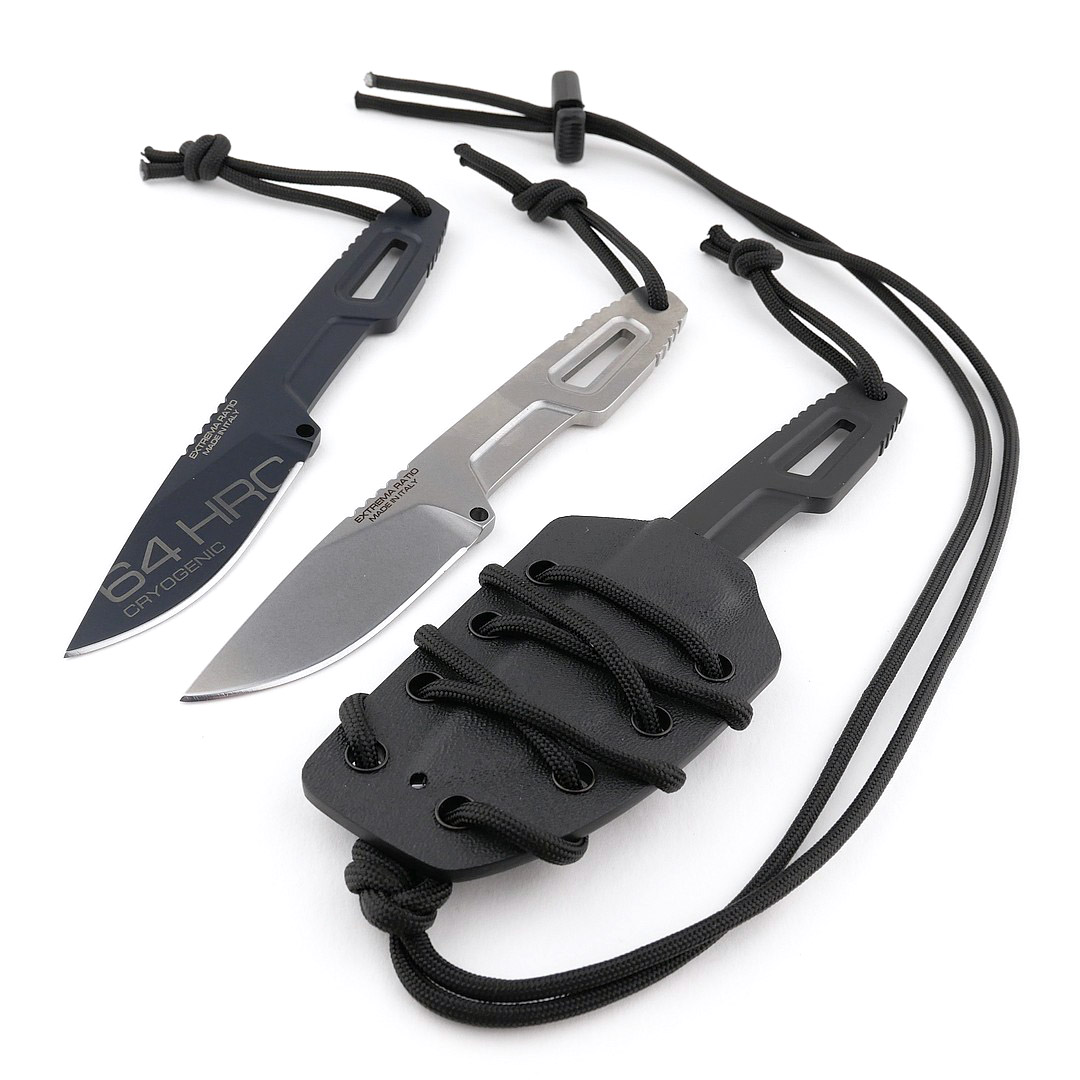 This video is a detailed look at the three SATRE Models, from handling to technical measurements, hopefully something for everyone.

The videos show all three versions, but as the dimensions, shape and function are all identical, the galleries here show the standard Black Satre. 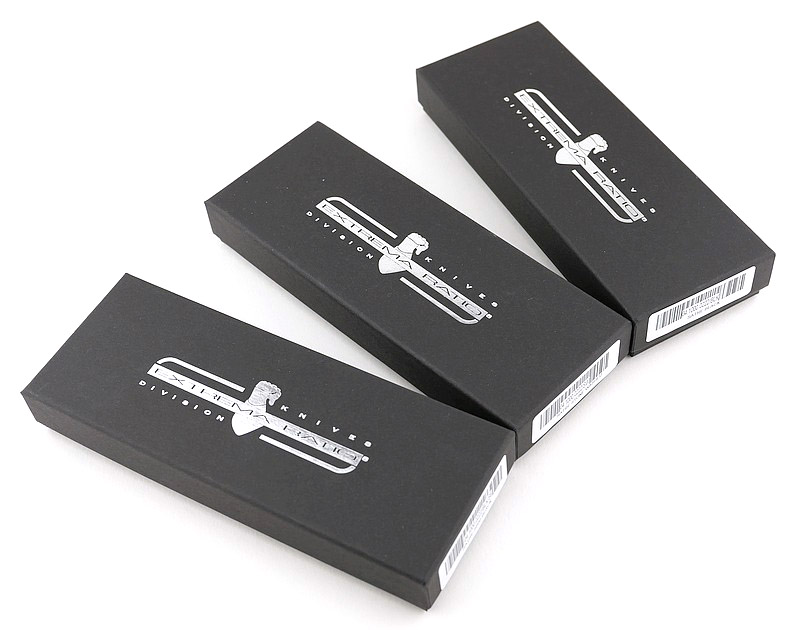 As well as the knife in a bag with desiccant, there is a QC certificate, care instructions and warranty information.

A good look round the Sheath – Things to look out for here are:

The small and neat Kydex sheath arrives with a neck lanyard, nicely laced through the eye rivets that hold the Kydex halves together. These eye rivets allow for other mounts to be fitted such as the ULTICLIP. The sliding adjustment toggle also serves as a safety break-away. There is a drainage hole at the blade tip on one side.

A good look round the Knife – Things to look out for here are:

The Satre knife consists of a single piece of steel with no other material attached to it (ignoring the small cord lanyard). Despite that simple construction, Extrema Ratio have managed to pack it full of character and clearly identify it as one of their designs. The distinctive first finger grip is shaped into the tang along with the small cut out for weight reduction. Plenty of jimping is provided for various grips.

The Blade and Handle – Detailed Measurements:
For full details of the tests and measurements carried out and an explanation of the results, see the page – Knife Technical Testing – How It’s Done. 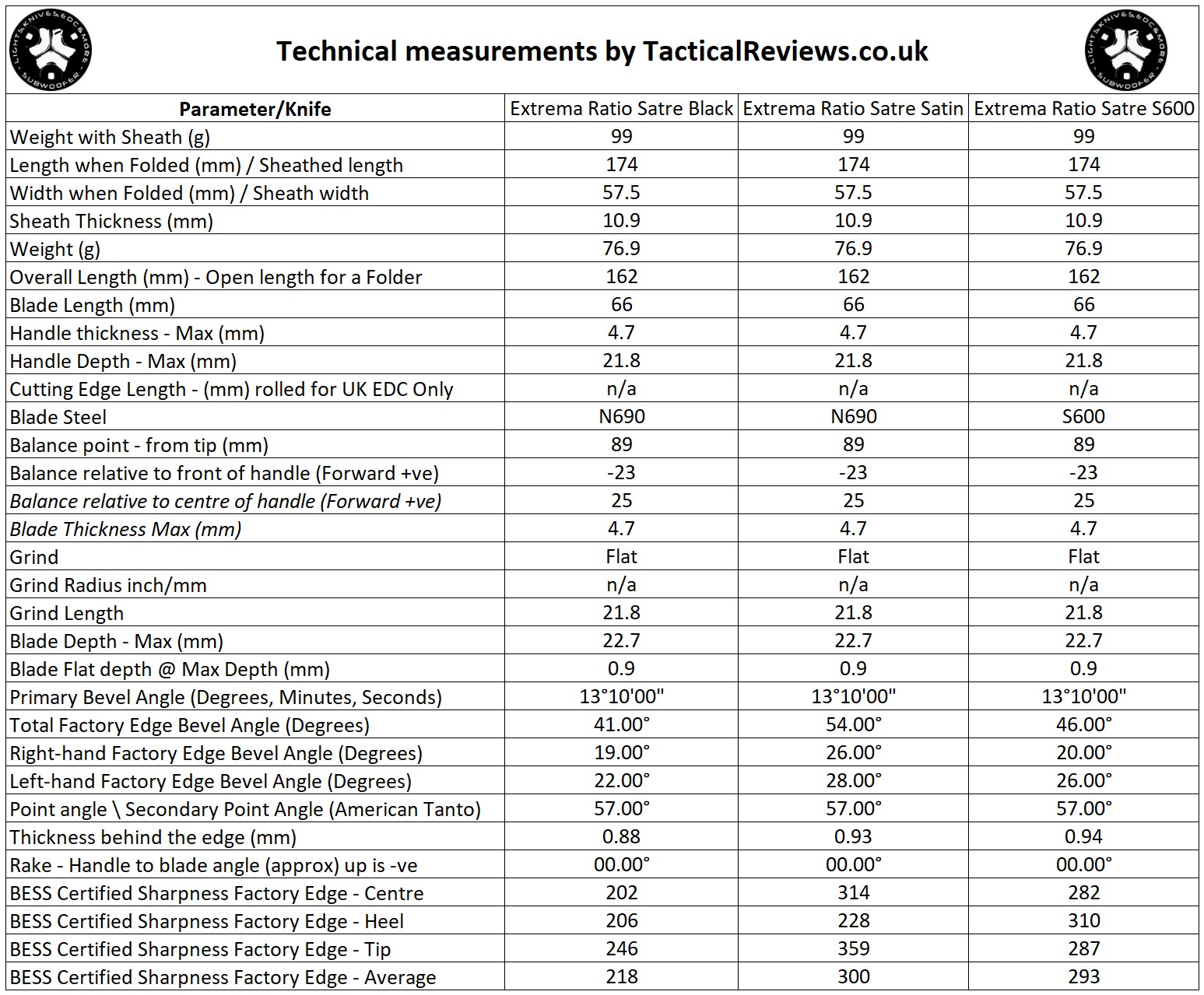 Added in 2019 are results from the Edge On Up Structural Edge Tester (SET) to measure the resistance of a knife’s edge to rolling.

First a video of the testing process, then the table of results.

The following results do show a clear increased resistance to edge rolling for the S600 steel. In fact after two ‘series’ the edge has rolled only a similar amount to the N690 blades have after one ‘series’. This is a clearly stronger and more stable edge apex.
Often this extra resistance to edge rolling can be coupled with a more brittle edge, yet the S600 recovered better than the N690 after stropping. (If it was brittle the edge can chip when stropping and give a high BESS measurement.)
In this table, are the individual results for all three, plus a combined N690 set of totals at the bottom.
The figures in bold in the first column are averages for the single measurements.

Followers of Tactical Reviews will know my views on factory edges, but to recap:

Anyone using a knife will need to sharpen it. That first factory edge is just like the first tank of fuel that a new car comes with (or first charge of the battery).
A good factory edge is a ‘nice to have’ but not a ‘make or break’ for a good knife, as you will be putting your own edge onto it soon enough.
The factory edge does however indicate the care a knife maker has put into the final finish.
It is for this reason Tactical Reviews measures factory edge sharpness and specifications, and includes this information in the detailed technical testing.

In these galleries are each of the three versions with a before and after SET testing image. The edge rolling is just visible, but not easy to see.

It’s just one of those superbly useful knives. An easy size to carry and use, or keep as a backup. The size of the knife is similar to a medium sized folder, but being a fixed blade makes it super tough and a real working blade.
Here I’m showing it in an un-gloved hand (a hand which takes XL size gloves). It is compact, and doesn’t fill my hand, but the finger groove provides a really secure grip with the jimping (especially the thumb jimping) giving confidence.

With it being a compact blade and one without handle scales, the knife is capable of much harder work than you can comfortably manage with the bare blade tang in your hand. This design keeps it very low profile and really does make carrying and storing as a backup so much easier than a knife with wider handle.

Either in the pocket, or hanging around your neck the Satre is slim and unobtrusive. I can make this comment, not just based on one example but on all three – the Kydex action is spot on. The sloped shoulders of the sheath are just right to push on to release the knife, and the blade clicks out without a fight. This action is almost identical across all three and holds the blade securely without struggling to sheath or unsheathe it.

As seen in the SET testing section and video, the S600 steel is noticeably tougher. As with any higher hardness and higher wear resistance steel, you will notice the S600 is much more difficult to sharpen, and will need a suitable sharpener. This always makes for a dilemma for field use for me. As much as I love a longer lasting edge, if I might need to rely on one knife and might need to sharpen it in the field I would want to be able to sharpen it more easily and if required with natural stones rather than specialist sharpening equipment. This is just a consideration, as for many the longevity of the edge it already has may be more important than being able to sharpen in the field.

With a blade this thick (compared to its length) it doesn’t slice as well as a finer pocket knife blade would, but this blade is one you know won’t let you down if you need to work it hard. If you put one aside as an emergency backup blade, you know it is going to serve you well. 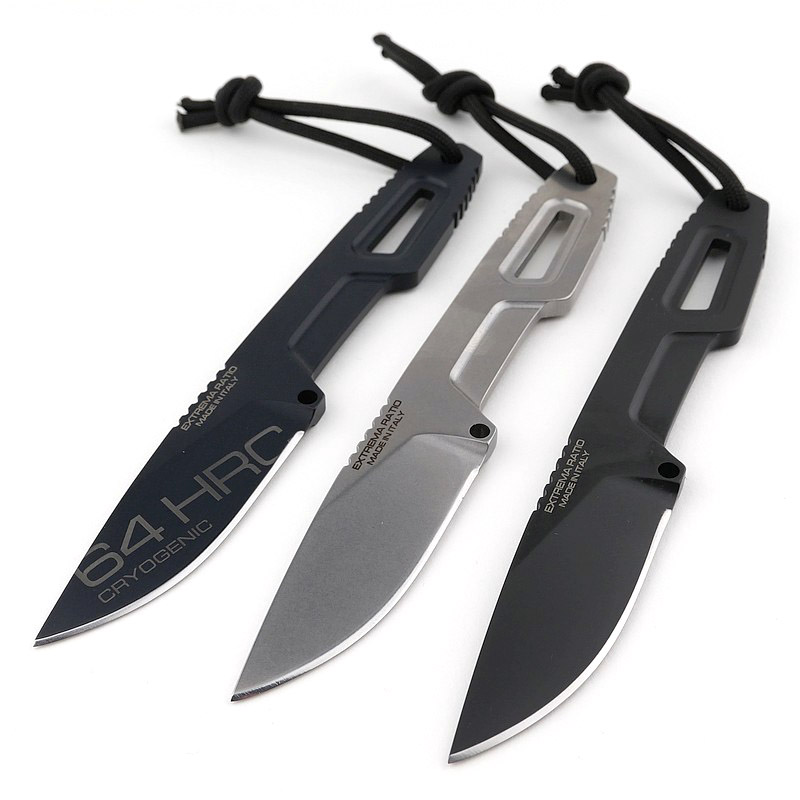