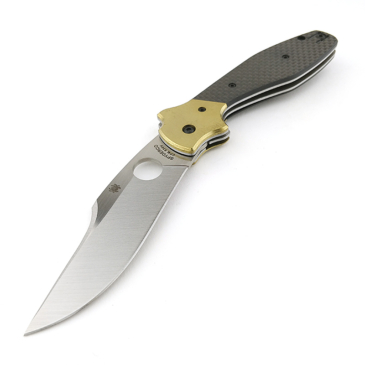 Part of the Spyderco ‘Ethnic’ series of knives, the Schempp Bowie is collaboration piece designed by Ed Schempp for Spyderco. Ed’s priority in the design was to convey an ethnic American Bowie and wanted to demonstrate a coffin handled, clip-point Bowie knife that originated with the Sheffield Bowie imported into the USA.
(Classic review – First published in August 2015) 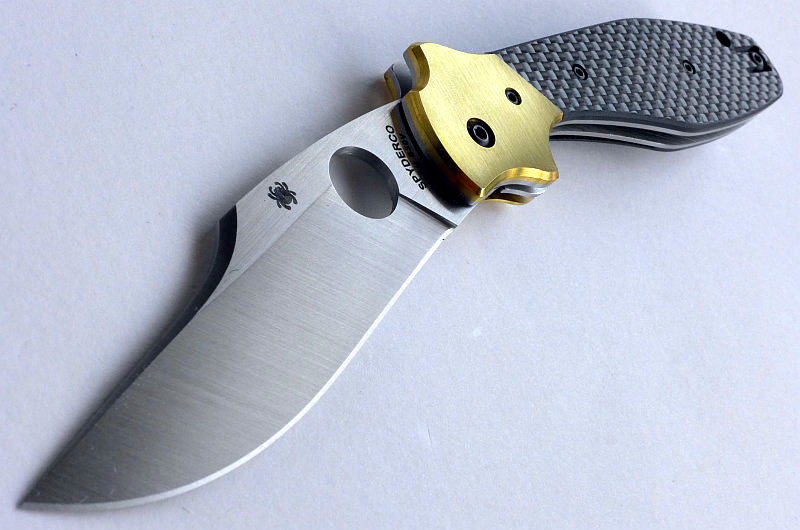 The Blade and Handle Geometry:

Most knives specifications have a basic description of the blade geometry, but in this section I will be taking a more detailed look at geometry and balance. 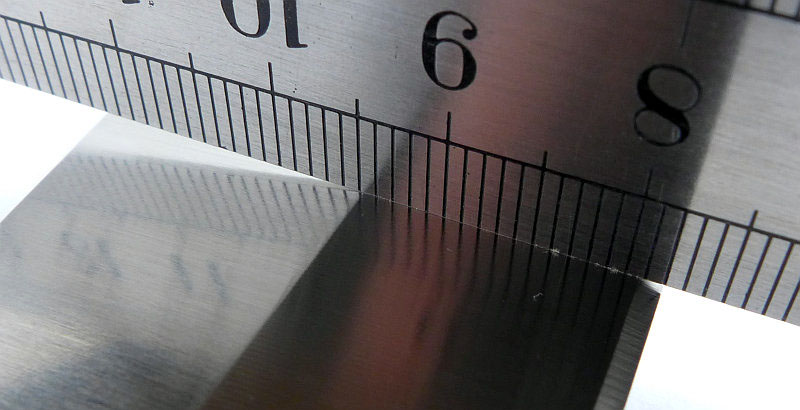 Using a set of gauges and precision measuring equipment including a Vernier protractor, callipers, fixed radius gauges and the unique Arc Master adjustable radius gauge (the one that looks like a crossbow). 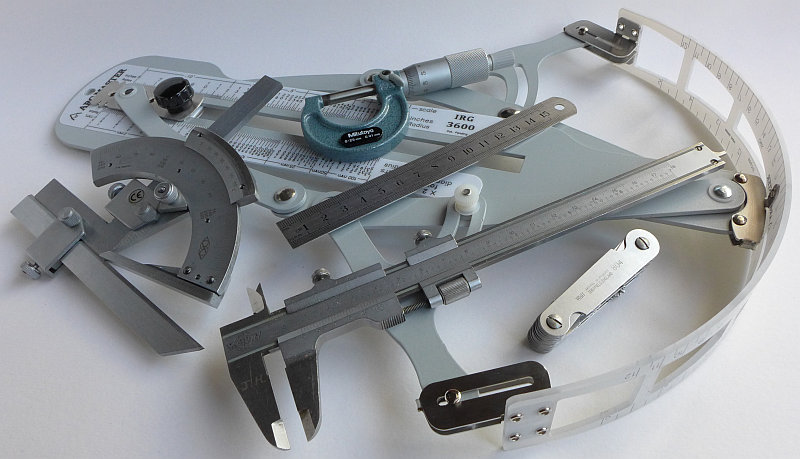 These measurements have been tabulated and are presented along with a few reference blades (8″ Chef’s Knife, 5.5″ Santoku and the popular Fallkniven F1).

In the case of full convex grinds the approximate centre of the grind is used for the primary bevel angle estimate..

The blade is made from CPM S30V.

The reasons for certain design choices may not be clear when simply looking at an object, so this section is intended to give an insight into the thinking behind a design by speaking to the designer themselves.

Ed Schempp spent time with me going over the fundamentals of the design at SHOT Show 2015, but as a follow-up I sent over a marked up image, to go over the details.

Many thanks go to Ed for taking the time to explain the details of the design to me. 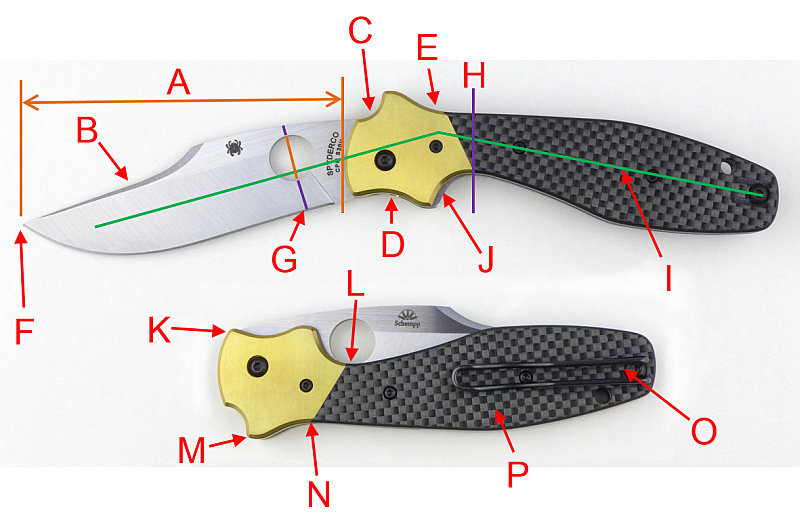 Though not quoting Ed directly, the following is an explanation of how the final design was arrived at and a few insights into the design process.

As mentioned in the introduction, Ed’s priority in the design was to convey an ethnic American Bowie, but this design was also influenced by the German short hunting sword. Ed wanted to produce a piece that was a coffin handled, clip point, “S” guarded Bowie.

Ed, like many US custom makers, introduces many ergonomic aspects into his designs and is very personally connected with this ethnic piece.

In line with his design principles, Ed generally drops the angle of the blade and develops the grip accordingly. This is done for the ergonomics of cutting, control and torsion. Ed refuses to design what he terms a “sharpened tent stake”.

Starting with the size of the blade (A), this has been maximized for the length of blade that can fit into the handle, along with as much cutting edge as could be accommodated by the handle.

When he designed the piece he actually made 4 different sizes to try and gauge a preference in size for the design. These prototypes ranged from a 3 inch blade to a 5 inch blade. In the end Spyderco chose the size they considered to be the best match for the most number of users.

The clip point, (B) is iconic to the ethnic version Ed was striving to attain. The clip was made slightly more than half the overall length to make it a significant feature. A flat grind was chosen as it has more material left in the blade and is therefore stronger. Flat grinds are one of Eds preferred blade grinds and are used in the majority of his designs.

As part of the ethnic design, to define the “S” shaped cross-guard there is a curved transition in the bolster (C) from the ricasso that rises up to the pressure ramp (E). The pressure ramp keeps the hand from slipping forward in use, giving additional control and power during cutting. The traditional Bowie knife is usually double guarded, so this ramp is part of the ethnicity of the piece.

Due to the Spyderco specifications, the hole had to be about 1.1 inches from the pivot. The hole has to nest into the handle, and yet offer easy access (L). 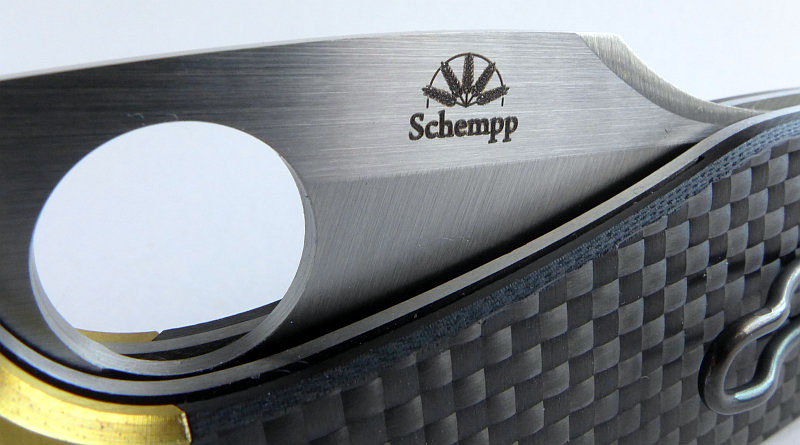 This meant there was minimal room for a specific finger choil, instead the area under the bolster is curved (D) allowing your grip to move forward and choke up on the blade. 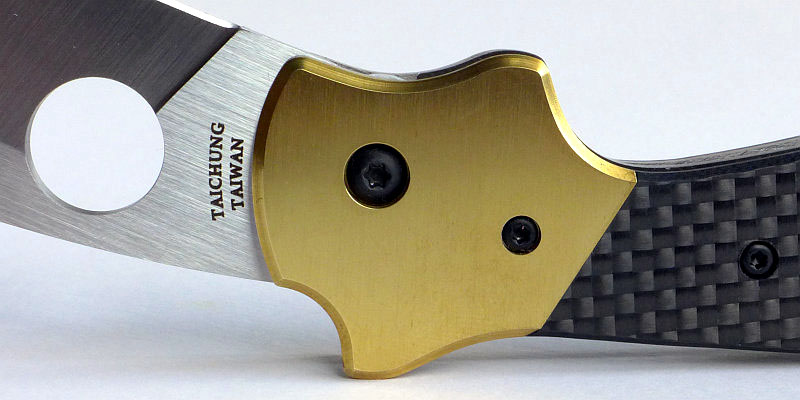 The blade tip height (F) is closely related to the rake (I) used in the design. This is distinctive Ed Schempp styling as he finds a knife with this much negative rake more comfortable and more ergonomic in use. It begins to align the edge with the major forearm bones, reducing fatigue when using the knife for long periods, and lets the blade get good purchase on the medium to be cut without making the wrist force the edge down. The rake angle chosen (I) is an angle that Ed prefers as in a normal grip it brings the edge square to the cut, and keeps the blade from sliding away from the medium you are cutting.

In this design, the opening hole is nearly half the blade height (G). The lack of metal is a slight concern as this blade is 2.5 mm thick, but in proper use is not a problem. Every design has an intended use, and when used as intended this blade is strong enough.

Taken from an earlier interview with Sal Glesser this is a relevant point for a digression from the Schempp Bowie:

As safety is a very important consideration, Spyderco break a lot of their blades on purpose with a special machine that records various measurements. Spyderco have a set of standards for blade strength in relation to the intended purpose of the blade, and how strong the lock needs to be for its intended purpose.

A few years ago a Rescue model was made, and then a smaller Rescue model. Because of needing to be used with gloves, Sal thought the hole needed to be a bit larger so he redesigned the blade increasing the size of the hole but also raising the top of the blade to leave more steel. When the first manufacturing run was carried out the maker increased the size of the hole, but did not retool to raise the position of the hole. The first run of 1200 knives were received with the hole well down into the grind line. For a normal knife this might be OK, but not for a ‘Rescue’ knife. Sal’s immediate concern was over the strength of the blade and immediately put the blades through the breaking machine. That night Sal dreamt that a fireman was rushing into a building and he pulled out his knife to cut something; the blade broke and cut him (the last thing a fireman needs on a rescue mission). The next day all 1200 knives were put in a barrel which was filled with concrete and taken to the dump. Sal sets his own standards and won’t sell underperforming products, failures are either repaired or disposed of, but never sold as seconds.

Back to the Schempp Bowie…

Narrowing of the grip at this point also accommodates a natural grip, and achieves the best balance for all the grip positions.

When looking at the knife from both sides, you will notice that from one side you cannot see the lock release….

…but on the other side, the bolster has been subtly pushed back (J) to expose the lock for ease of operation.

Ed doesn’t like exposed tangs on folders as he finds in many cases it is difficult to remove from the pocket and wears the pocket out prematurely. Careful attention has been paid to this detail where the bolster has been shaped to ensure it covers the blade tang (K). 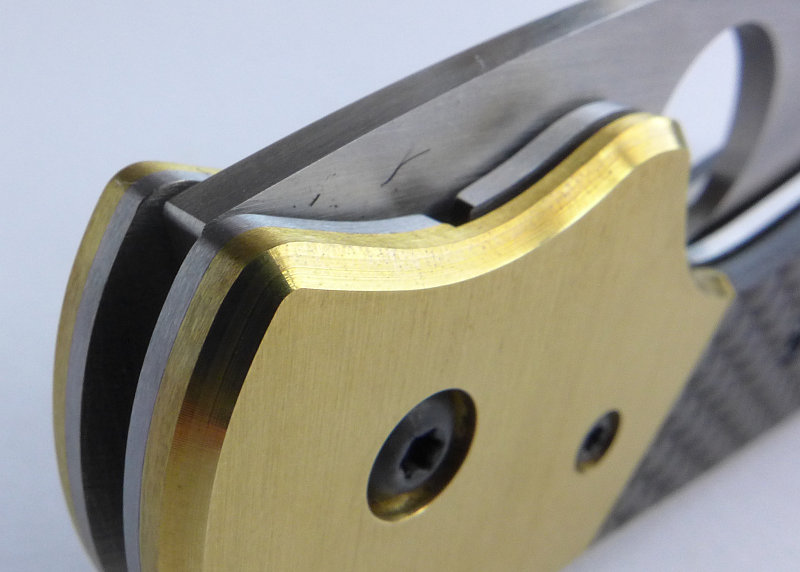 With this knife being an American ethnic piece, brass was chosen for the bolster material (M) as this was of course a material used on many traditional pieces and is part of the iconic attributes of the knife. However, it is a modern Spyderco, so the Carbon fibre (P) is consistent with the modern design and blends traditional design with modern materials. Carbon fibre in particular was chosen as the modern material for its light weight and high strength. 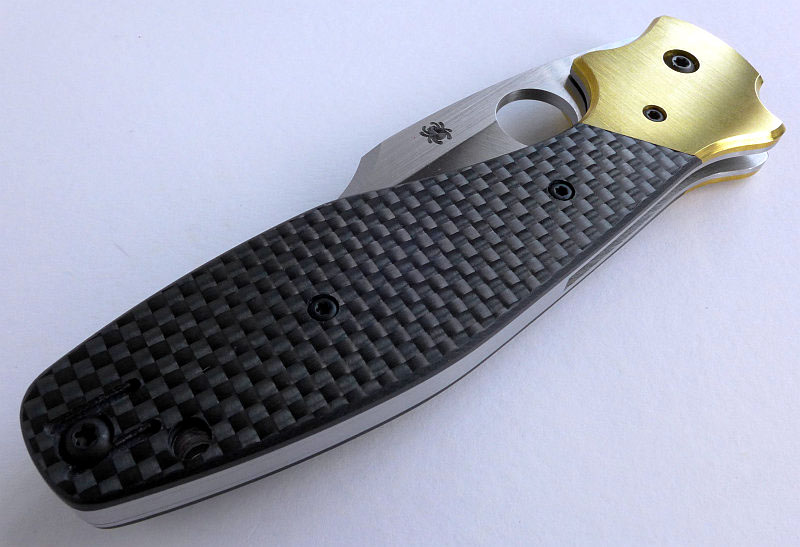 The dovetailed scale bolster (N) is a detail Ed generally uses on all his bolstered knives. When the handle is radiused, this gives the appearance of a radiused joint between bolster and scale when looking straight onto the face of the handle.

A deep carry pocket clip (O) was chosen by Spyderco and means the knife sits well down in the pocket making it more secure. Being made of round stock it doesn’t scratch car doors and furniture (as much). Though this was not specifically chosen by Ed, he believes that it augments the design.

Ed Schempp with his Bowie at the Spyderco booth at SHOT 2015. 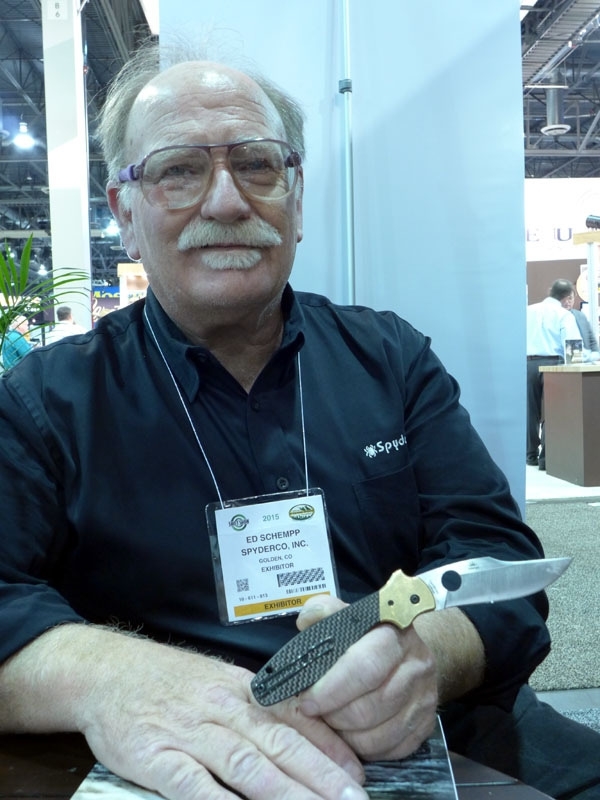 To get an idea of the size of the Spyderco Schempp Bowie, it is shown here with the Fallkniven F1 with the blade open. 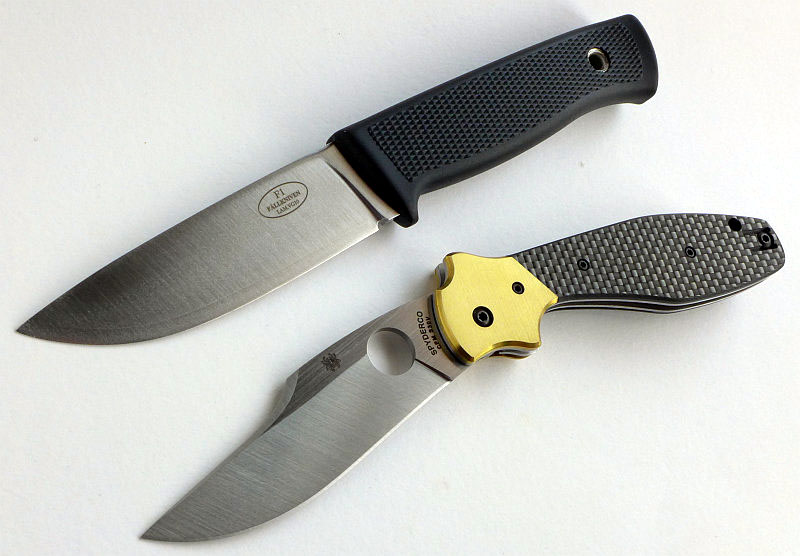 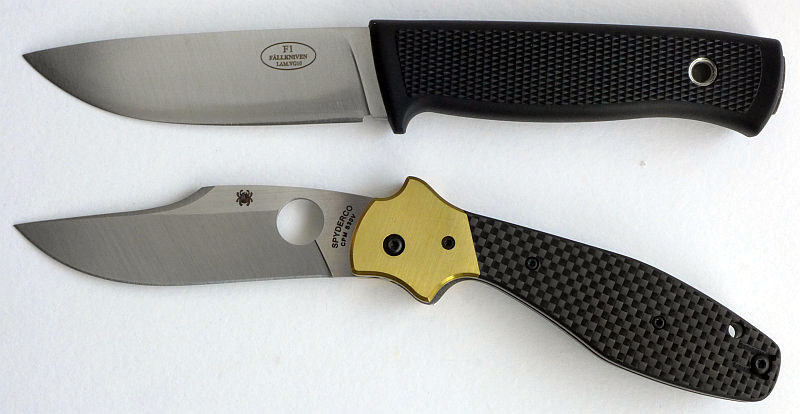 The deep clip of the blade allows it to sit well within the handle.

Blade centring on this sample was perfect. 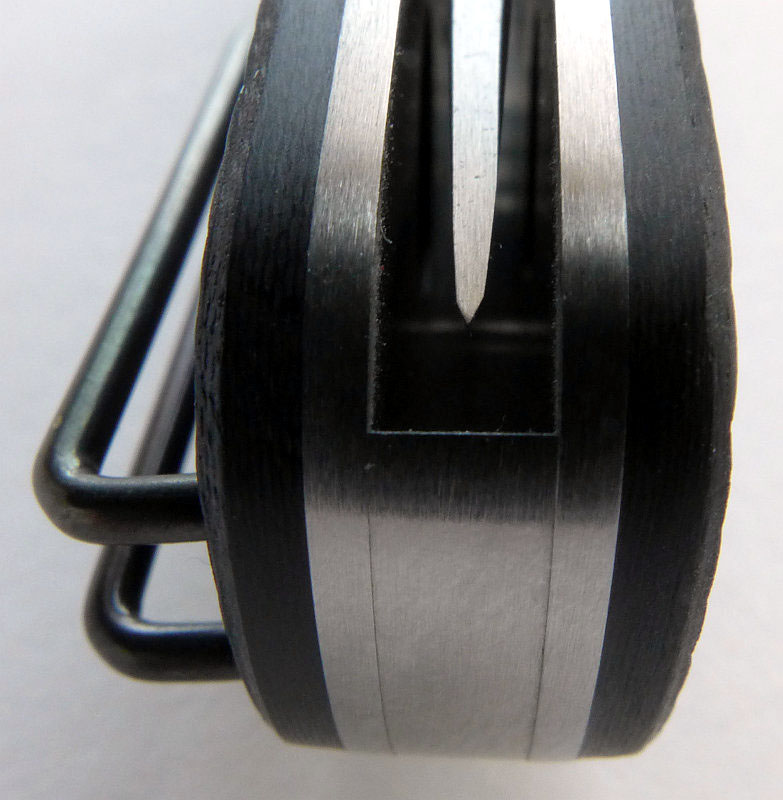 The liner lock has been recessed into the bolster and handle making it very low profile. 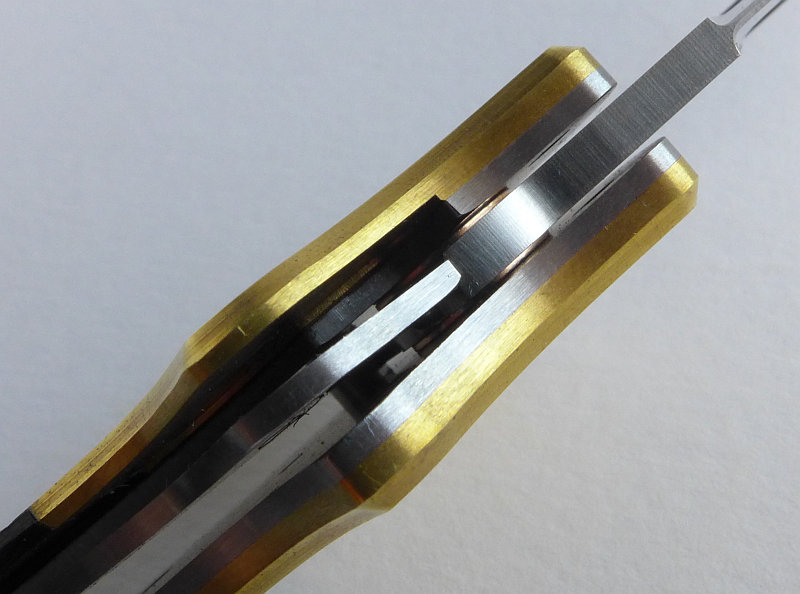 When I first saw the Schempp bowie, my immediate reaction was that it was “definitely not for me”. It seemed a curiosity that I would never choose for myself. However I was fortunate enough to meet Ed Schempp and talk to him about the design. My eyes were opened to the ‘intent’ in its careful design and combining this with handling the knife it all fell into place. More and more I found I could not put it down.

It is not a heavyweight knife, but much more an elegant, controlled, slicer. The blade opens so smoothly and easily on its phosphor bronze washers, making this one of the nicest one handed openers I’ve handled.

Open or closed this is a very sleek organic knife.

All the control afforded by the handle design and raked blade becomes obvious as you use it. I did find however that this did not work well carving wood, but excelled at opening sacks and boxes, cutting sheet materials and shaping foam amongst other tasks.

Looking at the different grips you can take shows the many ways you can use it. (For scale, I wear a glove size of XL in case you are wondering).

This knife is very hard to put down!