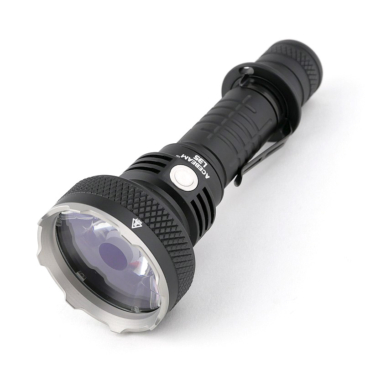 For me, finally, the long awaited arrival of an Acebeam L35. In fact, for this test sample I had given up all hope and written it off as lost, but amazingly it did arrive, only five months late! (courier issue, not Acebeam) Clearly it was meant to be (eventually), and as with all Acebeam lights I have tested, immediately showed its mettle. Join me in this belated review of the Acebeam L35, a 5000 Lumen tactical flashlight. 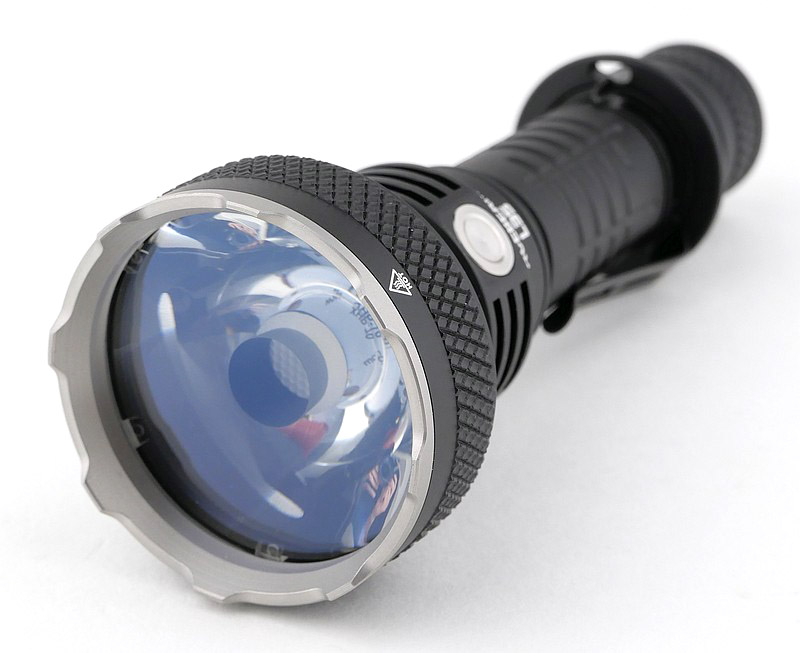 First Look Video:
This is a first look Review of the Acebeam L35 5000 Lumen Tactical Flashlight. ‘First look’ as at this point I had not carried out the full technical testing and output traces.

With the box being destroyed in transit, it is not shown. This is what was in the package when it arrived. 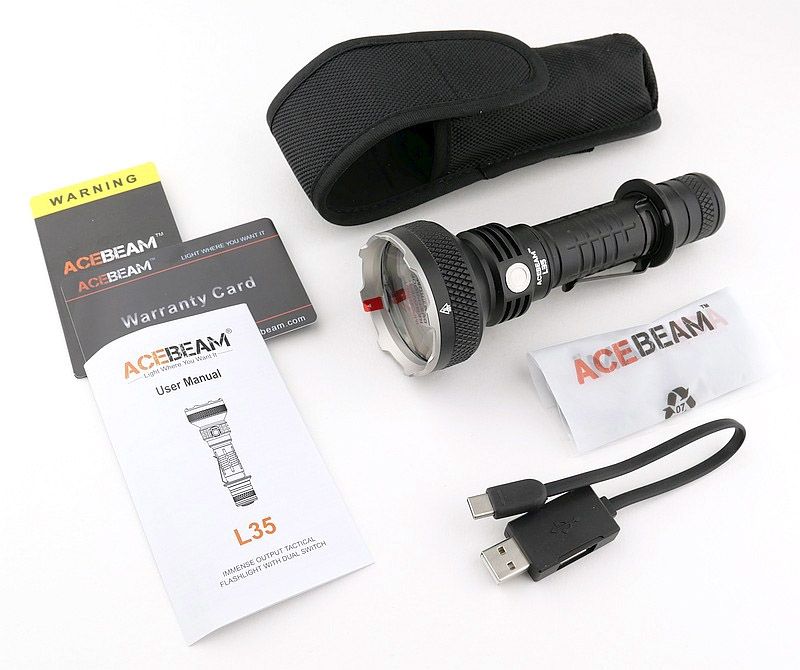 Details of the L35 – Things to look out for here are:
The L35 has a nice large head which really aids the handling, an interesting spiral pattern grip on the tube, tail and side switches, plus a double-walled battery tube to provide an extra control signal connection.

Even though not a LEP light, the raw power of the 5000lm output does create a visibly projected beam.

Also included here is a charging trace for the 21700 cell and a zoomed in runtime trace to show the first part in detail.

The L35 in use
We are all very used to tactical lights being based on the single 18650 / 2x CR123 framework, so the L35 might seem to be going in the wrong direction. For me that is not at all the case. The body is very comfortable to hold, the larger head give the L35 some presence and a stable front end to stand it on.

The ‘Ace’ delivered here is also the function provided by a tail and side switch. Making the tail-switch a dedicated maximum output switch, provides the true ‘tactical’ simple high output. The side-switch then delivers the rest – the more usable set of modes and ergonomic handling, for low stress situations. A really usable combination of modes and controls.

In an ideal world, the ‘moon’ mode could be a little dimmer. It’s not blinding with dark adapted eyes, but it is a little more disturbing for anyone you want to leave sleeping peacefully.

Talk about blinding – maximum output. Instant access to over 4000 lm from a small light (4769 lm at switch-on), it certainly is impressive and overwhelming at close range. But look at the runtime graph and you see that output (as is typical) dropping immediately, and by 60s from turn on you have 1500lm. So the headline figure is short lived and mainly available as an instantaneous blast.

There is nothing wrong with this as you have to manage significant heat output and the L35 is not a big light, so there is not much thermal ballast, the 5000lm figure is always going to be in short bursts. Despite this, it is a solid performer and you will soon realise that you actually rarely want that much light when you are also right there next to it.

With the side switch, and output level memory, the L35 also becomes a superb every day light. Pick you favourite output mode and a single tap to access it. I know many swear by tail-switches, and they have their place, but for every day tasks, the side switch gives you a more natural way to hold it.

Although the L35 can’t tail-stand, it has enough leakage due to the bezel crenellations, when head-standing that you have a gentle background light. I’ve found myself using this quite a bit, but being careful not to use anything other than moon, low or mid1 just in case it heats the desk too much.

It is a bit bigger than my typical EDC light, but moving to a new phrase I’m coining, it is an excellent EDU (Every day use) light, and I’ve made space for it.

If you found this review helpful and would like to support further reviews, please use this link to Acebeam should you decide to buy one. 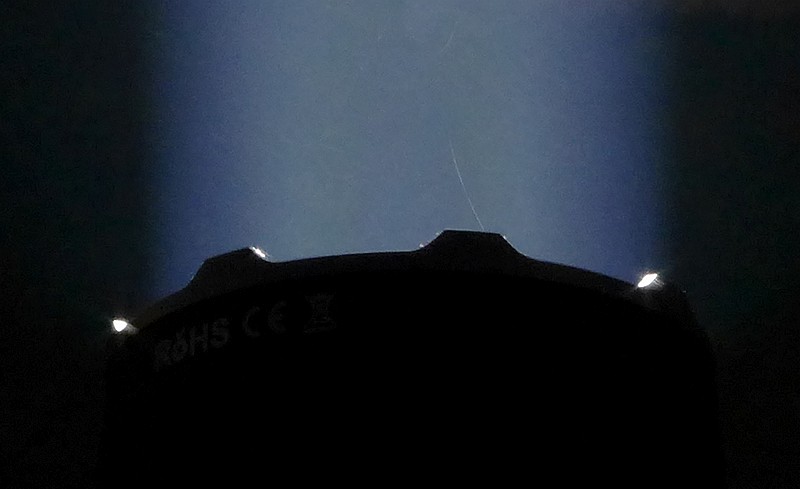