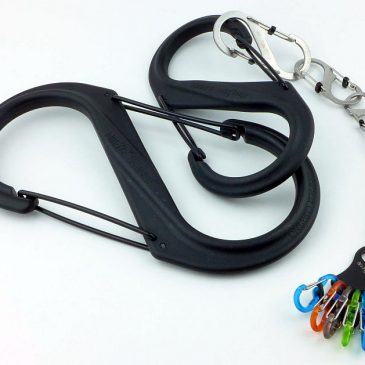 There are some things that are so useful you can’t really image life without them. Nite Ize’s S-Biners are one of those designs that have simply integrated themselves into so many of my every-day activities I’d be lost without them. For some these will need no introduction, but if you haven’t used them before it is very likely the S-Biner is going to find a way into your selection of gear. 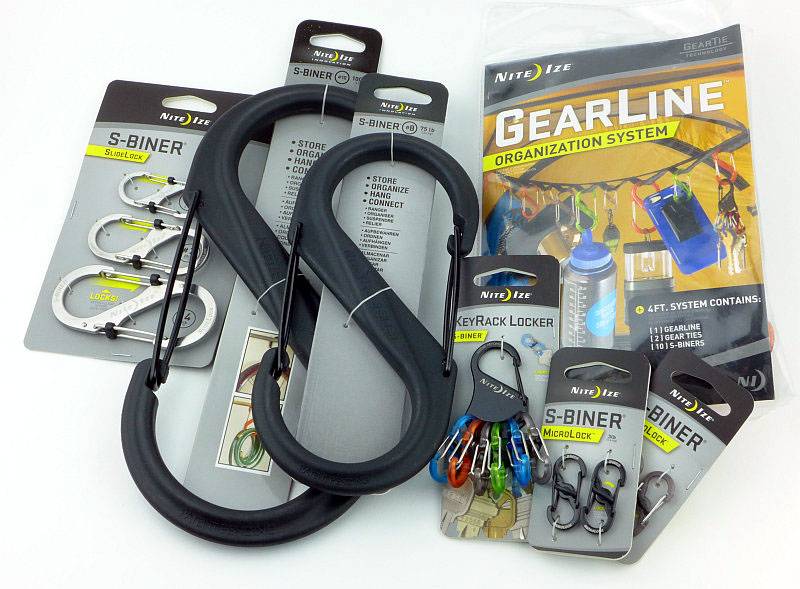 Moving forward I’m breaking this down into three groups, the larger S-Biners, micro S-Biners and the Gearline system. 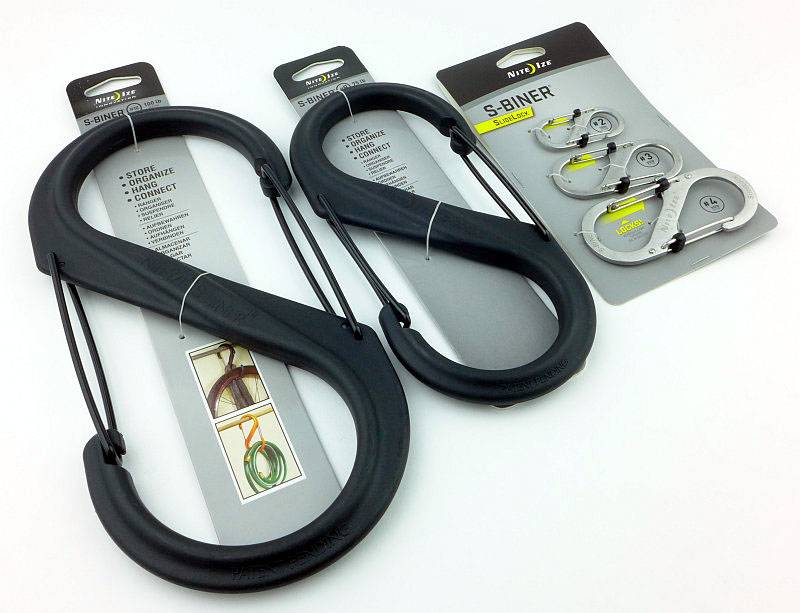 Here are the first set of S-Biners 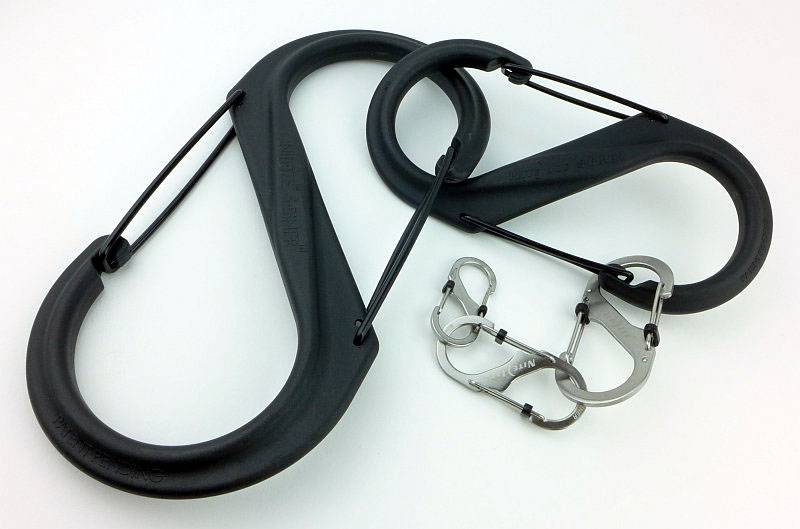 The packs say ‘BIG’, and big they are. These are the two largest S-Biner models. They only come in plastic versions and give you the option of a super-sized clip.

Of course the SlideLock S-Biners are much more normal in size for clipping keys and anything else to bags, belts etc. 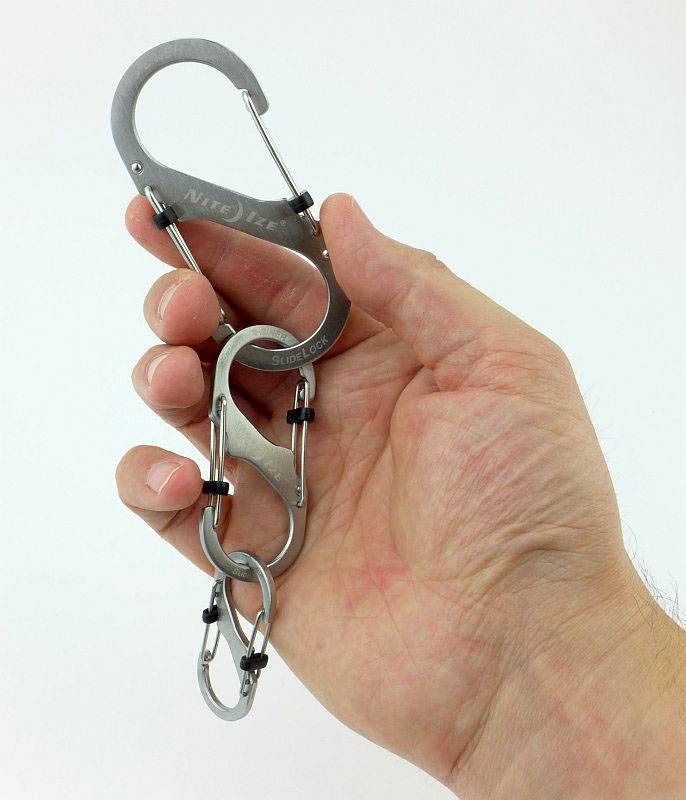 With the SlideLock, you can see the black plastic slider on each gate. Here the top one is locked and the other unlocked. 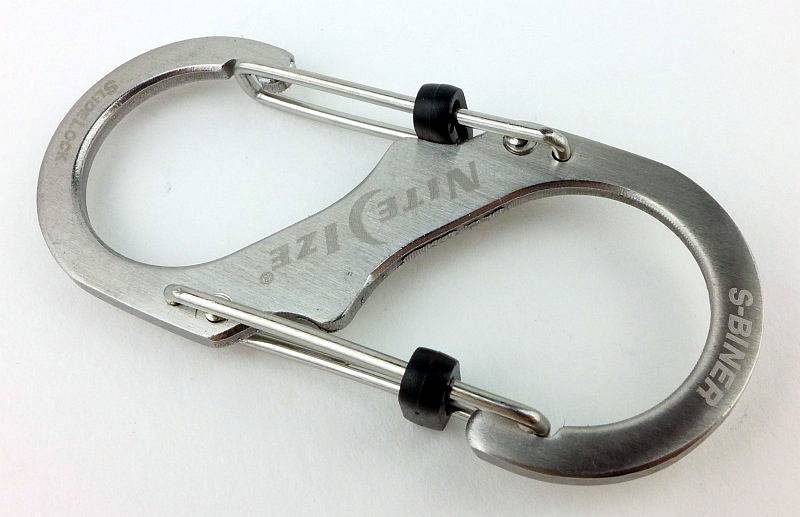 The instructions for the SlideLock are very clear, but you don’t need these, it is obvious how simply and easily they work. 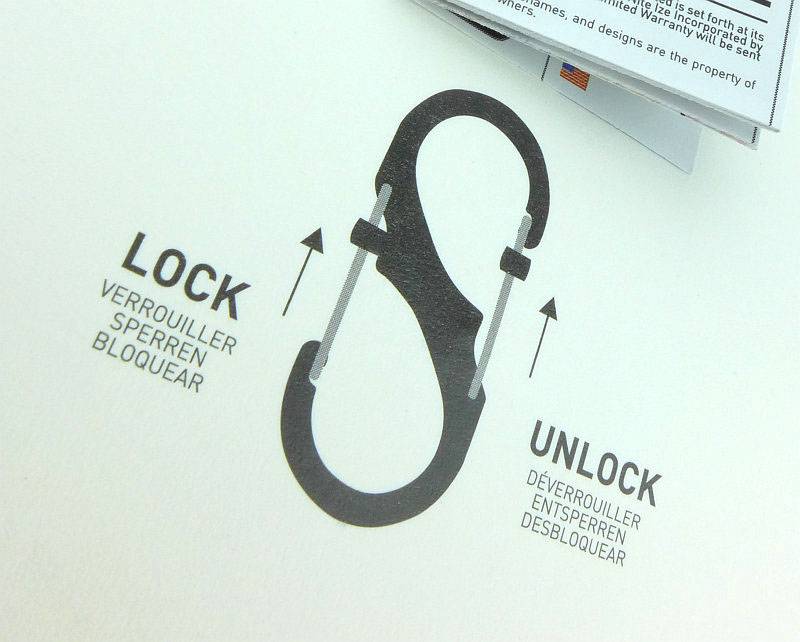 Looking in closer at the slider, it is shaped so that it won’t easily fall off the gate bar. 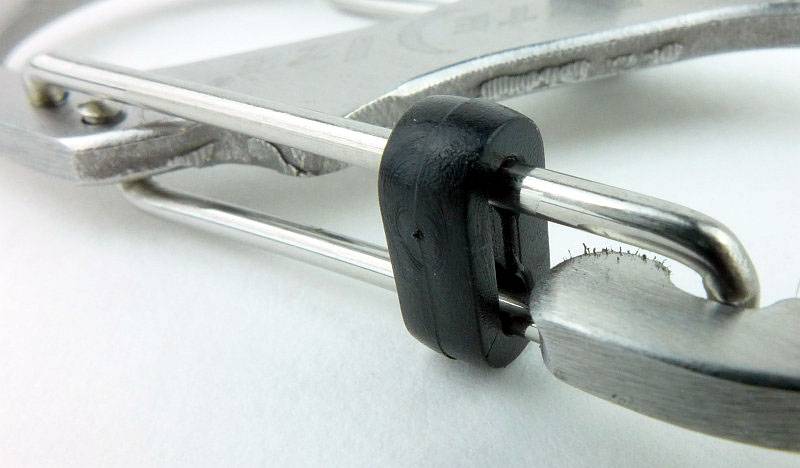 In the locked position the gate is positively held closed so the S-Biner won’t get twisted off and become lost.

Next up are the real key-ring sized S-Biner models the Micro-versions. In this case these all feature the micro-lock design. 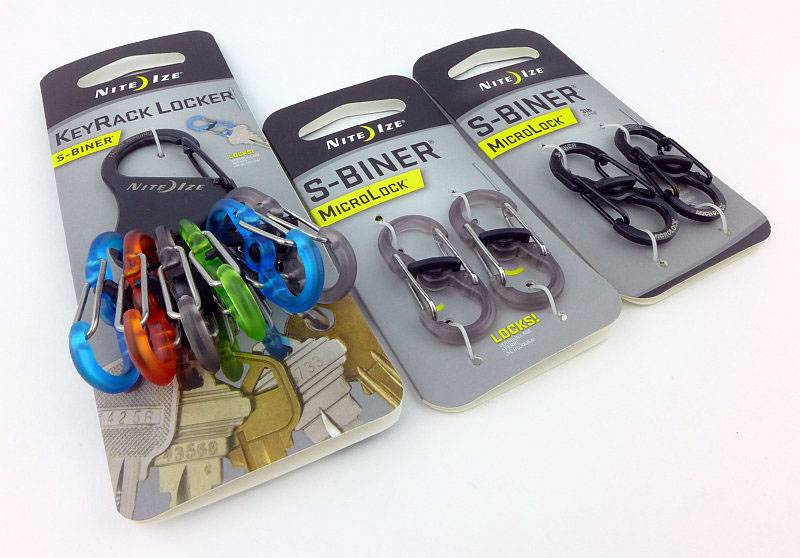 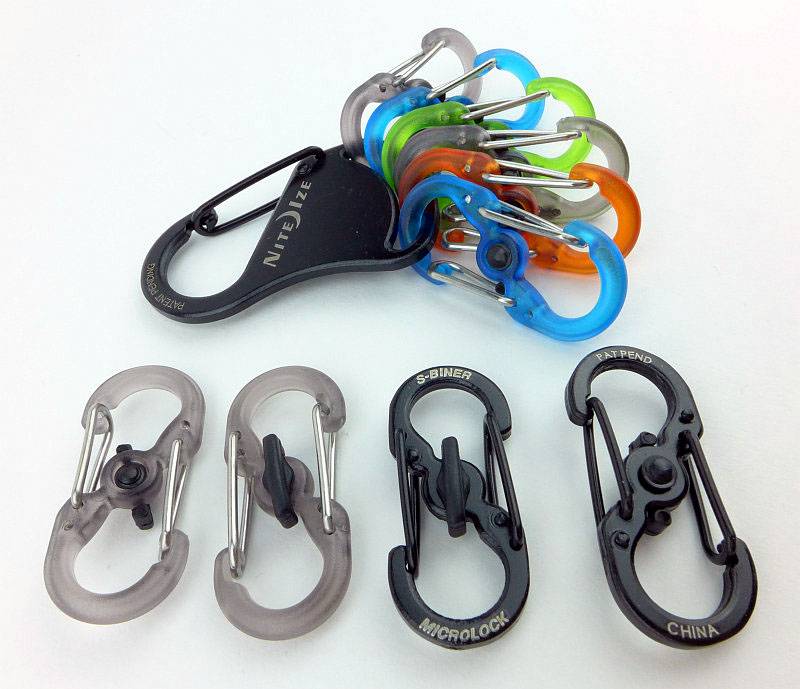 The MicroLock is a stroke of genius. With the smaller clips you are often carrying vital objects like keys. Previously the smallest S-Biners were pretty secure, but with the MicroLock you remove all doubt.
In the middle is a small plastic arm which rotates. When aligned lengthways, the gates are unlocked, but when turned cross-ways and clicked into the locked position, both gates are locked shut. Sitting on these or otherwise giving them a hard time won’t shift those gates – believe me, I’ve given them a run for their money and the lock has not let me down. 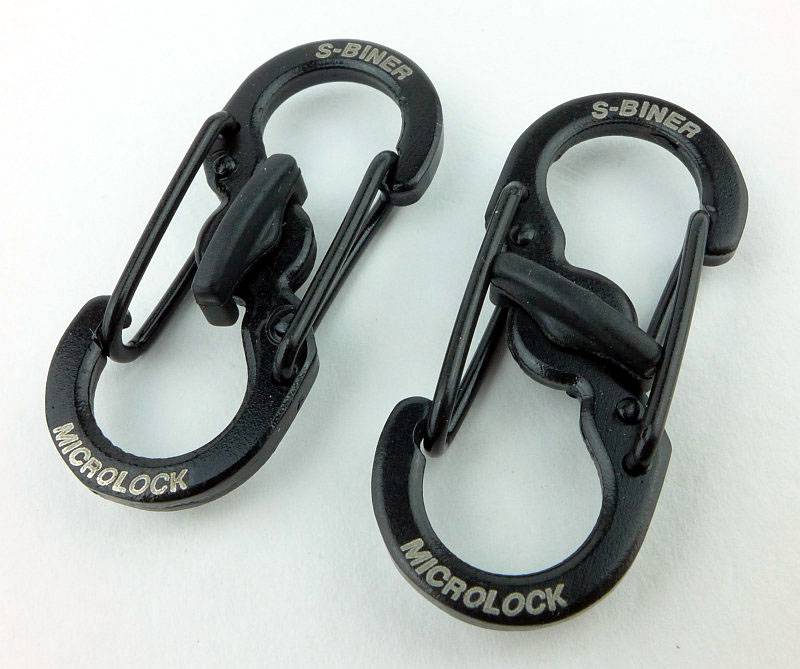 Same hand (I take an XL size glove by-the-way) and these are as small as they can be, but still easy to use. 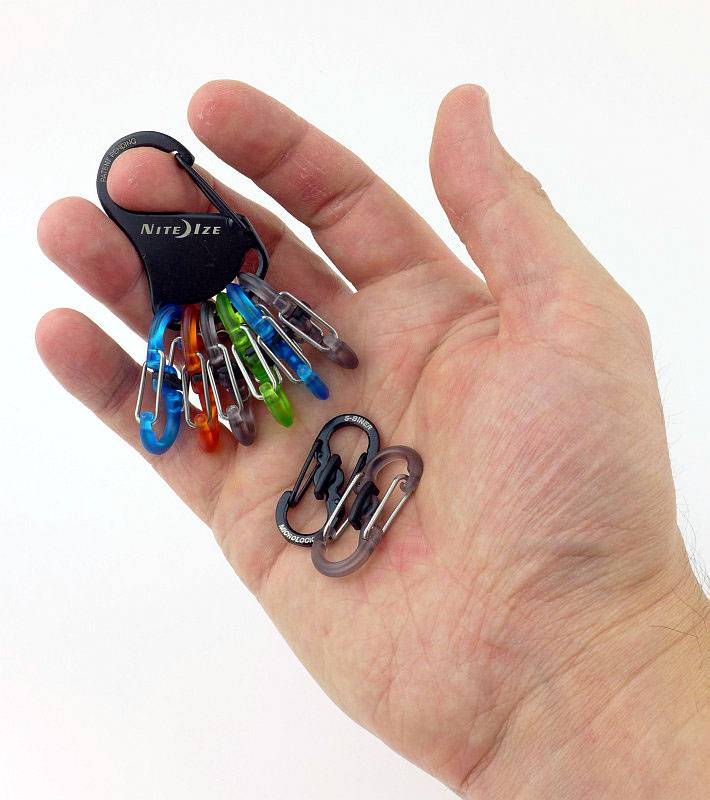 Lastly in this review is a logical extension of the usefulness of the S-Biner, and that is the GearLine. This is the GearLine Organization System 4FT. 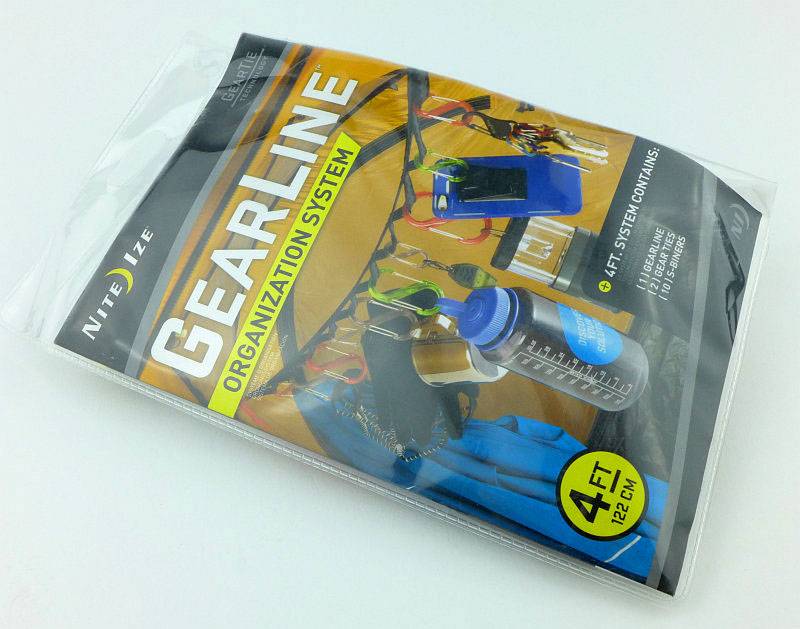 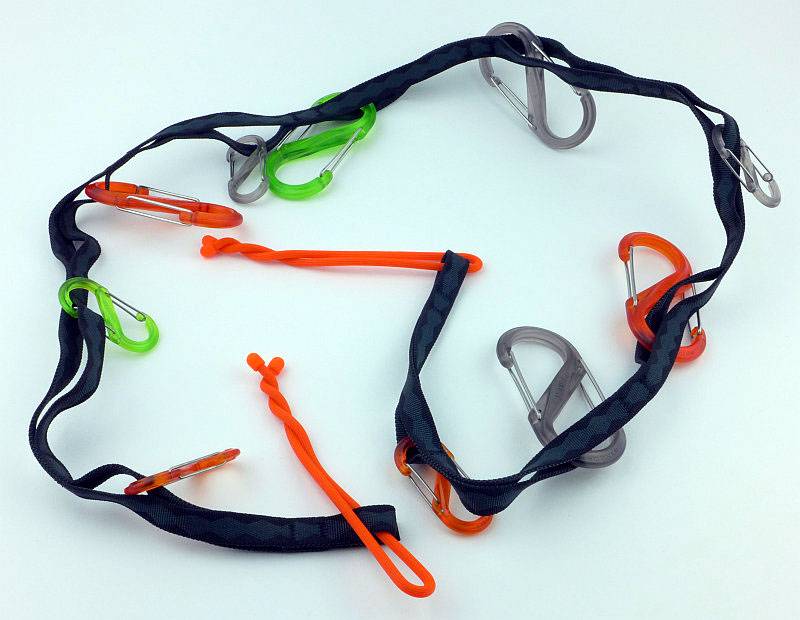 The Gear Tie fresh out of the box. 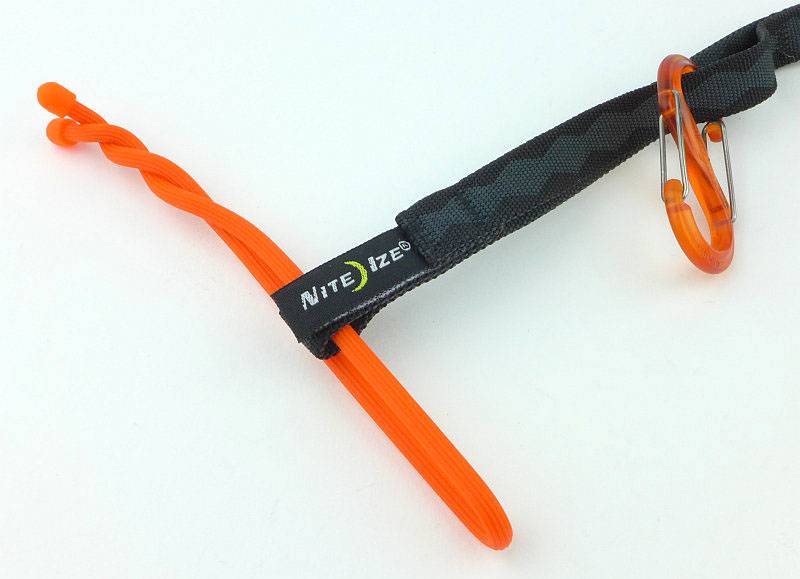 Along the webbing strap are a series of loops formed by the double layer of webbing. 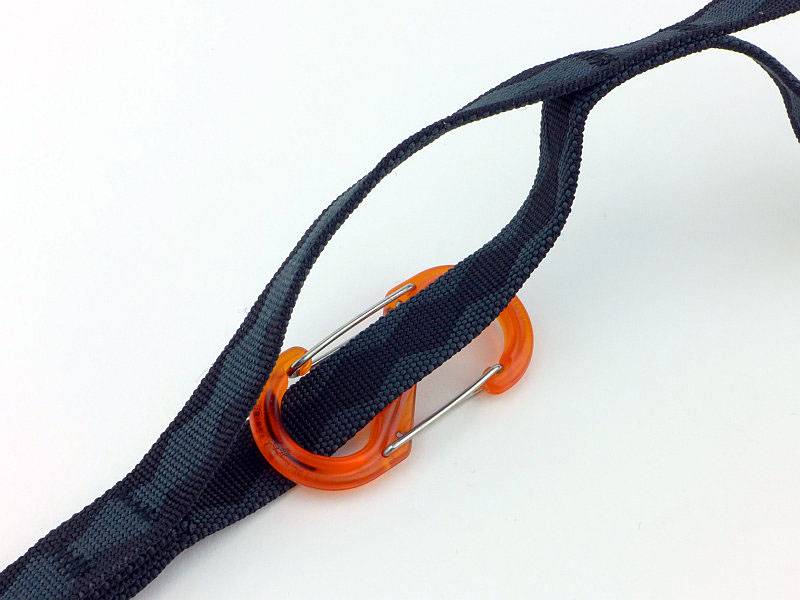 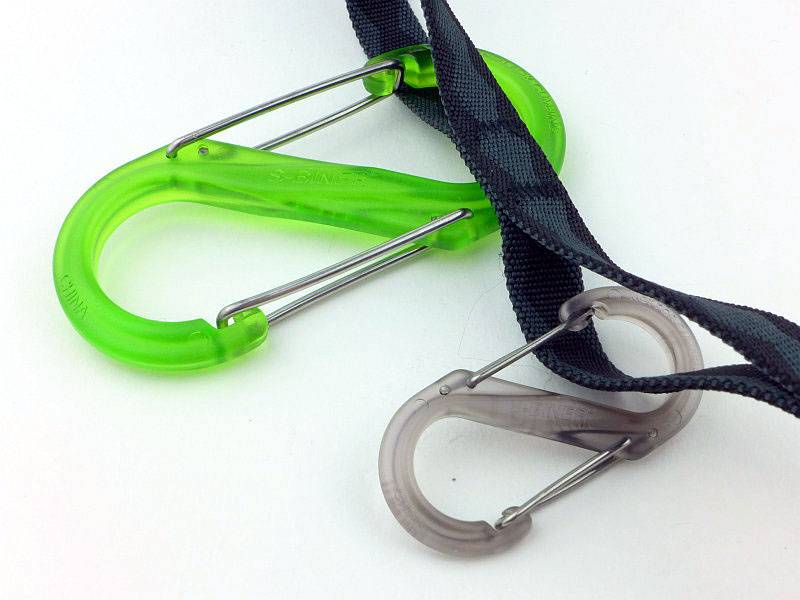 Quickly comparing the S-Biners in the GearLine system and the three sizes of SlideLock S-Biners. 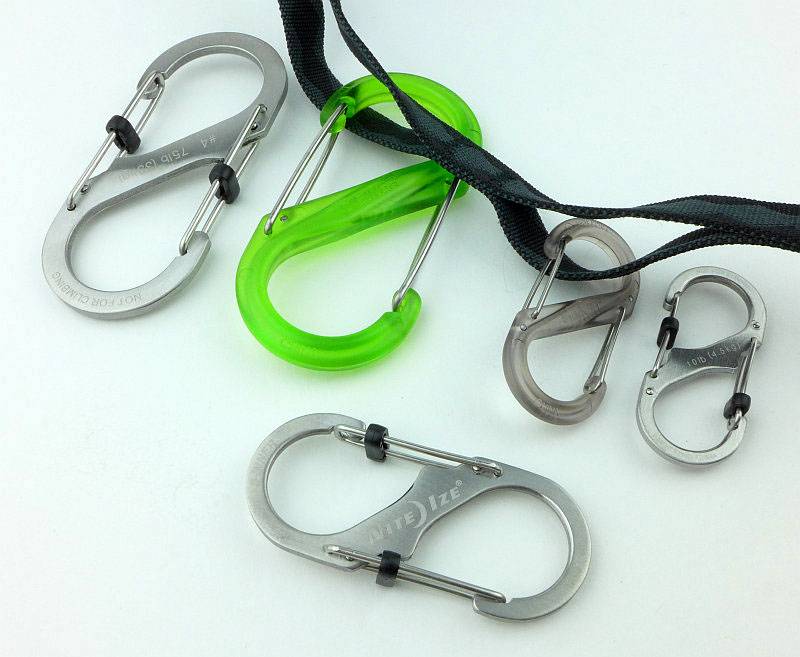 Those Gear Ties just untwist and are a stronger version of twisty-ties. 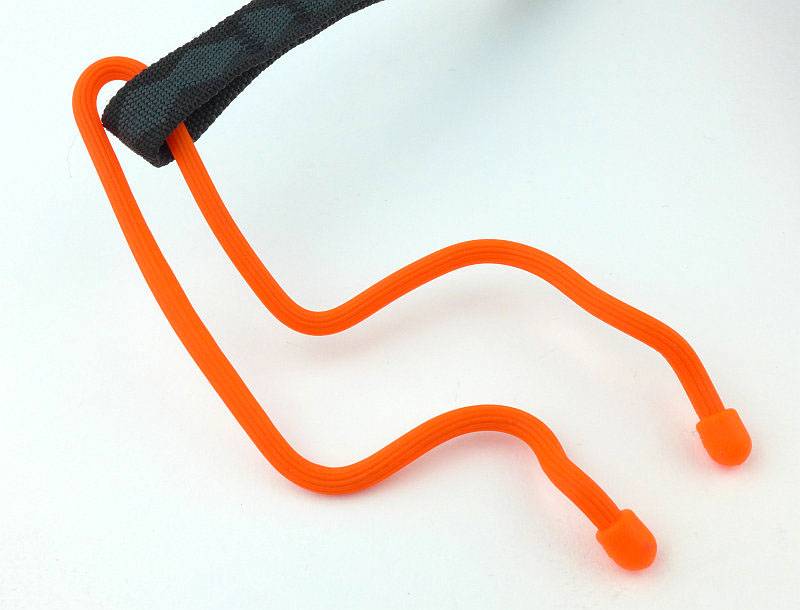 Anyone leading an active life and who uses a variety of gear will need and use clips and karabiners of various types. The biggest revelation of the S-Biner design over karabiners is the double-gate. This keeps the item you are carrying secured separately to whatever you are attaching it to. A simple thing, but it means that when you open one gate or the other, you are either releasing the item, or taking the S-Biner off from the attachment point.
With a standard karabiner when you open the gate both the item carried and the fixing point can be released; not always what you want. Intended as true load-bearing devices, the karabiner is usually larger and heavier than you might want. Not only does the S-Biner take a karabiner to a more useful layout, but it is also not as big and heavy, as it is not intended to carry the weight of a person.

When preparing this review I wondered how I would show the extent to which I use these, but while standing there in my photo studio, I just patted myself down and pulled all these out of my pockets/belt. We’ll take these one at a time in a moment, but you see how integrated these are. 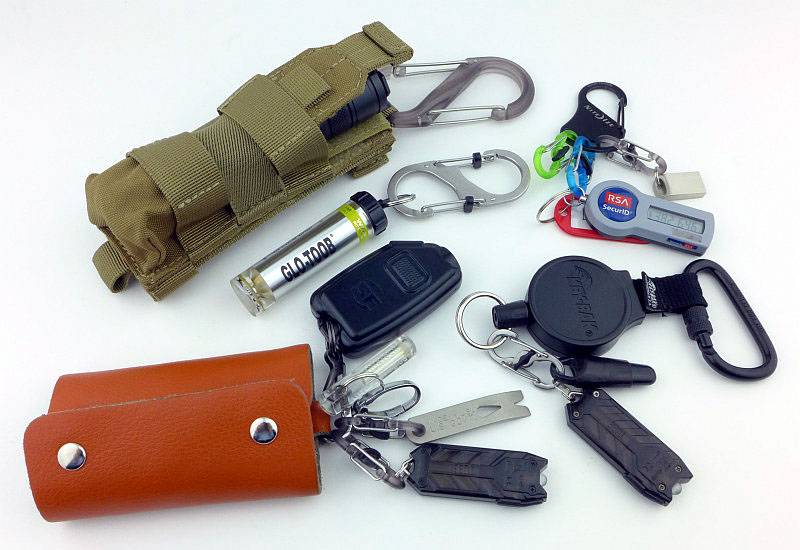 So the biggest here is a torch/flashlight pouch which is clipped onto my belt or belt loop, or onto my backpack. 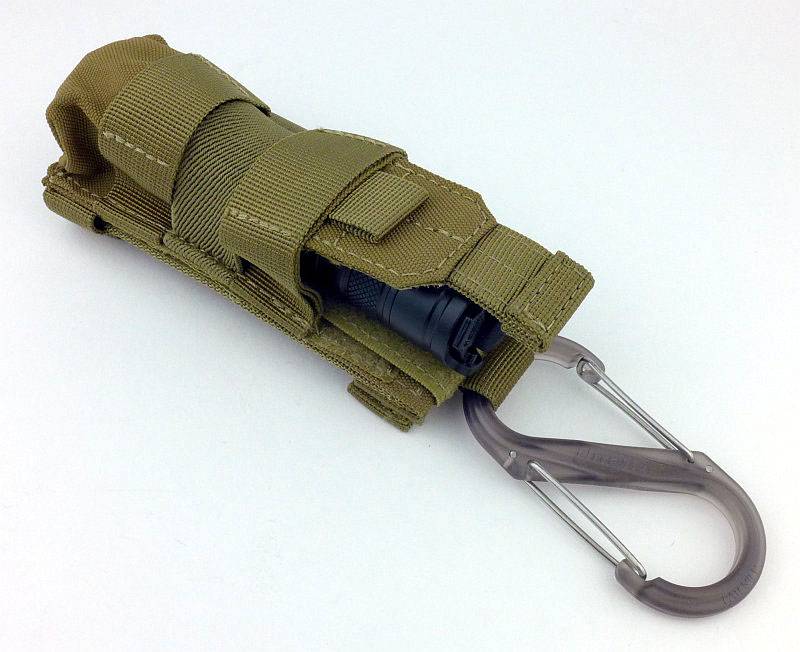 Mainly a marker, this Glo-Toob is left to flap about (normally on my backpack) so needs the extra security of a locking S-Biner.

A couple of work related items which need to go from one bag to another and the KeyRack holds a SecurID tag and a USB flash drive. There is normally another flash drive on here but it has been lent at this time. 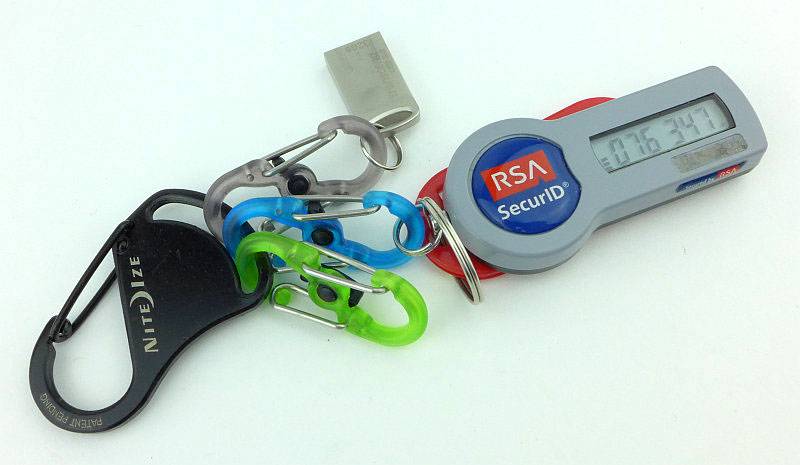 On this kevlar cord retracting key ring is a MicroLock S-Biner that has been particularly heavily tested. Sat on, caught in doors and accidentally hooked onto this and that, the door entry tag has never come loose. 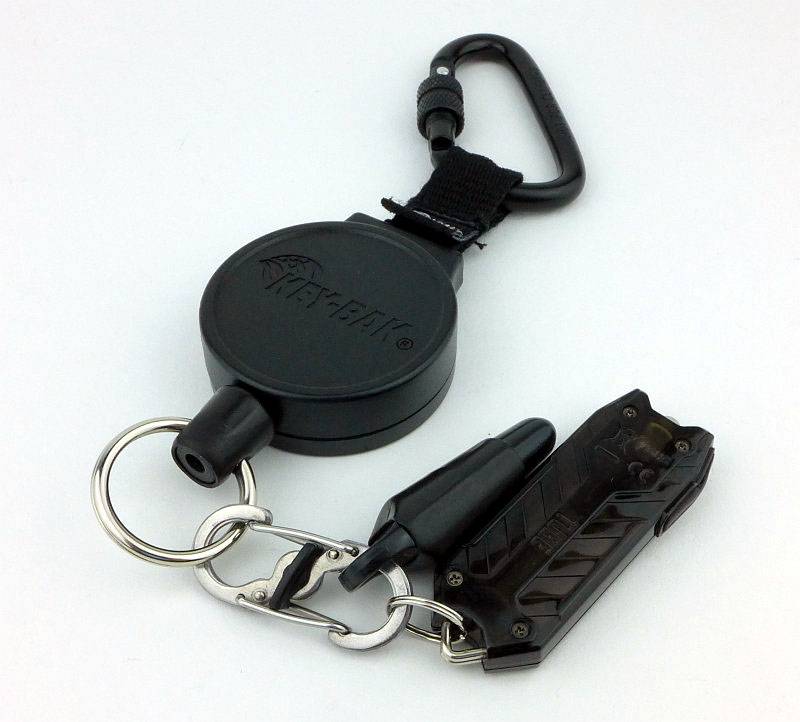 Then my keys. Pretty heavily loaded with more non-key items in the wrap, but outside the widgy pry-bar and a TUBE light are held securely with the plastic MicroLocks. 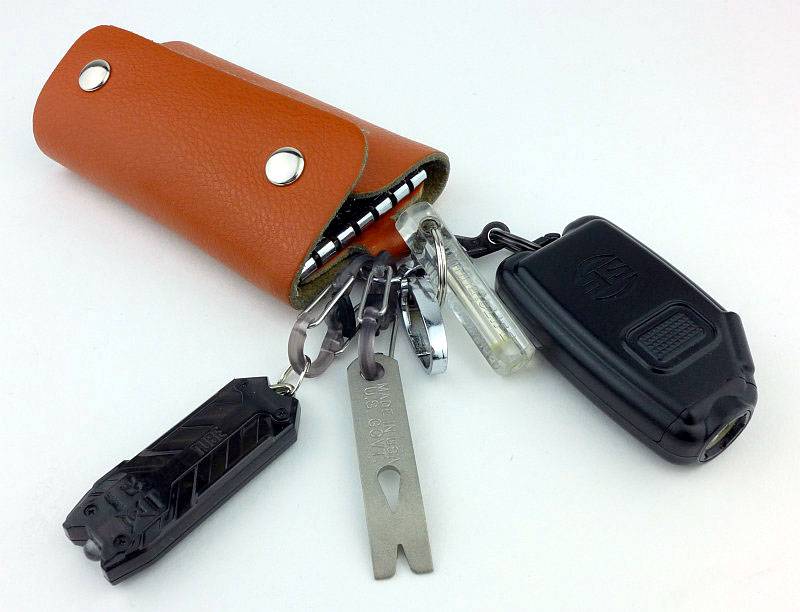 So that GearLine, where is it? When I go camping I do use this inside the tent, but it also has an every-day use, which for me is in the boot (trunk) of the car. Fixed between two headrest posts, the GearLine gives me lots of fixing points to stop various items moving round. Most often I use this to keep shopping bags from rolling around and emptying themselves, but other things go on and off the S-Biners. 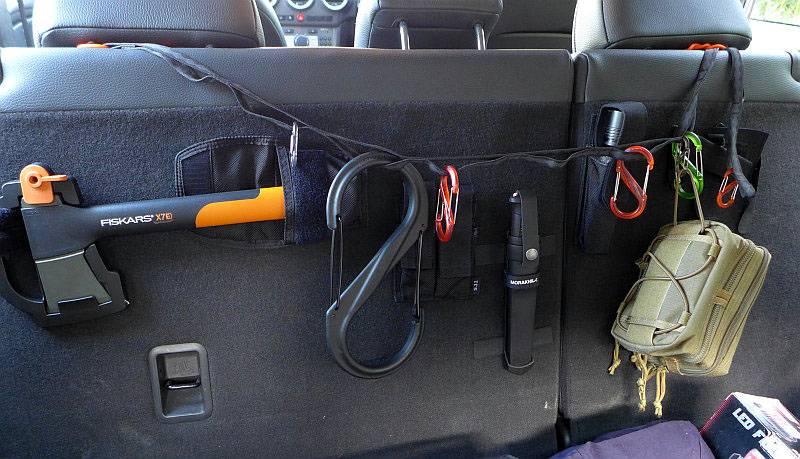 The only aspect of the S-Biner that occasionally causes a problem is that there is a groove in each hook where the gate bar sits when it is closed, and when taking the S-Biner out of a tight-fitting loop, sometimes this groove catches and makes it difficult to remove. Other clip designs also have this but the S-Biners somehow seem to catch more than most. I certainly forgive the design this minor flaw as overall the S-Biner makes the karabiner a practical true ever-day carry item and I would not be without them.

The BIG S-Biners also bring this practicality to a much larger scale. I carry the #10 S-Biner as a backpack hook and use it to hang the bag on tree limbs, rails and any other suitable hanging point up to the thickness of your wrist.

You have a choice of size, weights (plastic or metal), materials which are either stronger or anti-scratch as well as two types of lock. 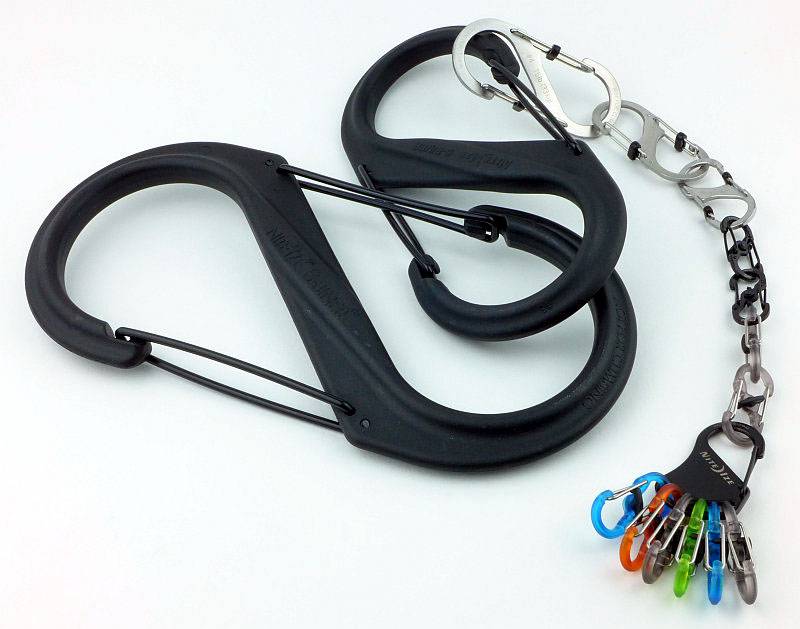 Looking into the business end of the new @nitecore

My normal heavy duty firesteel proved a bit much f