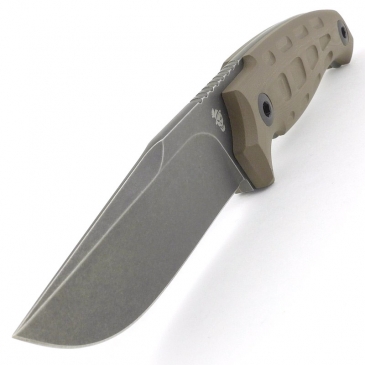 Finding Oberland Arms’ knives was an outstanding highlight of IWA 2018, and it became a mission of mine to review them. A happy coincidence that one other IWA 2018 highlight happened to be another knife designed by Tommaso Rumici who is the designer of the Jager Sepp on review here.
Everything came together nicely at IWA 2019, meetings with Tommaso, Viper Tecnocut and Matthias Hainich of Oberland Arms, and here is the first of two reviews for Oberland Arms knives (the Wuiderer Sepp is currently in testing). 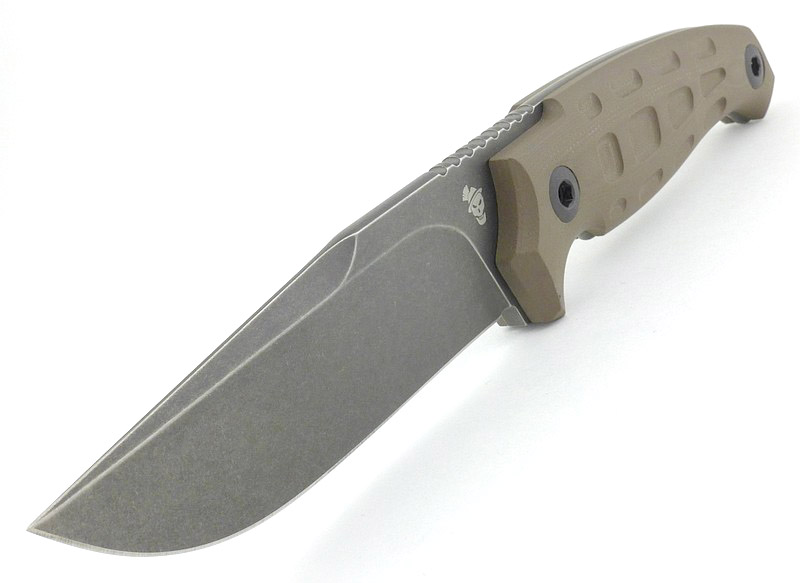 No unnecessary frills with packaging that will just be discarded, the Jager Sepp and Wuiderer Sepp arrive in a plastic bag. 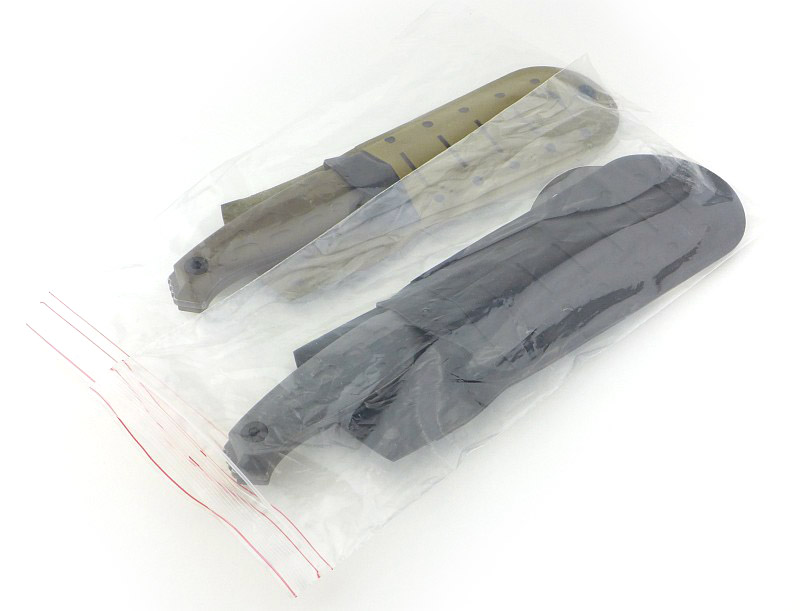 Starting with the sheath:

This is the one part not designed by Tommaso Rumici, but instead by the team at Oberland Arms. It has a lot of interesting features shown in the gallery.

A good look round the Jager Sepp – Things to look out for here are:

Overall there is a real sense of purpose and lack of unnecessary frills on the Jager Sepp.

The reasons for certain design choices may not be clear when simply looking at an object, so this section is intended to give an insight into the thinking behind a design by speaking to the designer themselves.

Tommaso Rumici has been kind enough to talk to me about this knife and the design process. I am also reviewing the larger Oberland Arms ‘Wuiderer Sepp’. The interview with Tommaso is in two parts, with this review containing Part 1:

This image of the first sketch of the final design of the Jager Sepp has been kindly provided to me by Tommaso Rumici. 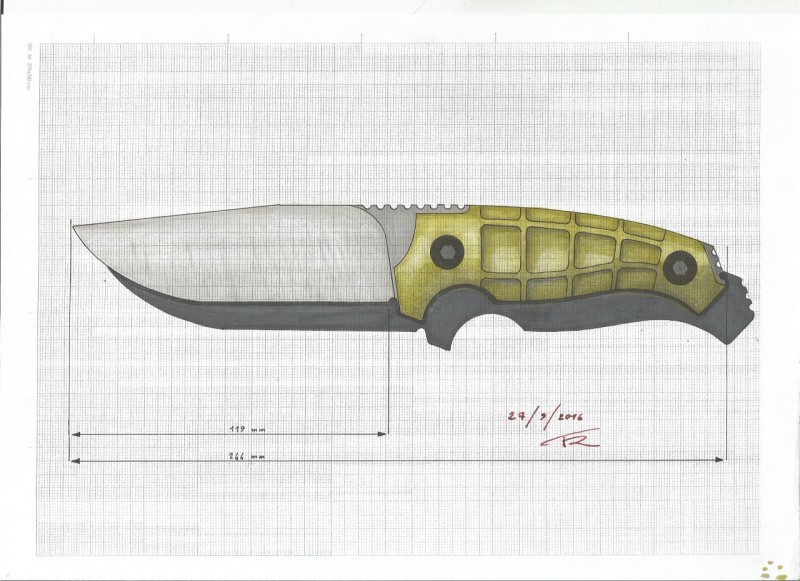 How did you get involved with Oberland Arms to design these knives?

“Me and Matthias Hainich, CEO of Oberland Arms, met during an IWA Show. I was helping at Viper’s booth, and he was looking for someone to produce knives for his brand. At the beginning, we started with a lightly modified version of the Viper David, then we continued with exclusive designs, made for Oberland following his specifications and requests.”

Can you talk me through the design brief, and how far developed it was when given to you?
“During September 2016, Mr. Hainich sent me a list of specifications for the new knife, with some indications about the tasks it would have been able to accomplish, and a few examples of existing knives with the same characteristics.
The new knife was going to be a fixed blade, with green or coyote G10 handle, 11,9cm blade with 5mm thickness, flat grind, with stonewashed finish, and a Kydex/Nylon sheath.
I started working, exchanging emails with Matthias, and before October we arrived to the final design of the smaller one.
Since Mr. Hainich is a fan of my Carnera, we also tried a bigger blade with a similar Bowie design (but smaller than Carnera’s one, which is too big for a military knife). This blade became the bigger one.(The Wuiderer Sepp.)

At the end, we had a meeting with Mr. Miniutti (Viper), and checked everything before production. During that meeting, we decided for the Black Stonewashed PVD, and to work on three different handles: OD green, coyote and wolf grey G10.”

There was a repeated question I got when talking to others about these knives – why D2?
AISI D2 is a good steel for hard working tools. It holds a good edge, it’s tougher than a lot of “inox”, and more stainless than high carbon steels, like 1095. It isn’t the latest alloy invented but, in my opinion, it’s a great choice for a military knife, that can be abused or lost in the field, because it gives you great performances, it’s difficult to break, while keeping a great price/performances balance.
Speaking of the real life, I tested several D2 knives made by Viper, and I’m really satisfied about how they work. Especially the Viper Tank, designed to be an heavy outdoor tool.

Part 2 of this interview will be in the Oberland Arms Wuiderer Sepp Review.

In the Lab – Technical Testing!:

The first image in this gallery shows the standard review measurements, however, this is the first review on Tactical Reviews to feature a new measurement. Using the Edge On Up Structural Edge Tester (SET) to measure the resistance of a knife’s edge to rolling.

Of Oberland Arms’ three fixed blade knives (at the time of review), the Jager Sepp would be the all-rounder in terms of size (the main reason I’m testing it first). With a 12cm blade (just under 5″) it is in that ideal general-purpose-blade length. The high, almost full, flat grind gives the blade strength combined with powerful cutting ability.

Good handle design provides immediate indexing of the blade, comfort and grip options. On picking up the Jager Sepp, this is what strikes you straight away. It just sits in your hand, balanced nicely on your first finger, nimble and ready to work; a natural extension of your hand. The grip is a generous size without being overly large, and its size and shape have not presented me with any hotspots when working it hard. Grip indexing works almost as well in a reverse grip, considering the forward grip has that first finger groove, this is impressive.

For a working knife, three elements are as important as each other. The blade, the handle and the sheath. In some cases the sheath can become the most important element, as a knife is no good to you if it is lost, or you can’t get to it when you need to. The Oberland Arms sheath is a great mix of clever design ideas and hits a lot of sweet spots.

The nylon outer shell holds a kydex liner, meaning no additional knife retention is needed, the kydex lips hold the Jager Sepp firmly in place even when mounted handle-down. A thumb ramp is incorporated into the kydex so you can easily unsheathe the knife quietly and in full control.

Ambidextrous use is catered for in the simplest way; the kydex liner is held in the outer sheath with a single bolt. This allows you to remove the kydex liner and flip it round for left-handed use – an excellent solution. I’ll cover more on the sheath in a dedicated gallery following this one.

On its first venture into the outdoors, I went with the factory edge, but found this a little too steep an angle (52 degrees), so took this to a total inclusive of 35 degrees. I find this a good compromise when I don’t want to go all the way to 30 degrees, but want a finer edge than a typical 40 degree.

OK, perhaps the elephant in the room – D2 steel. Once the wonder steel of legend, then becoming more mainstream, before being mostly discarded in favour of steels designed specifically for the knife industry. Is it too hard to sharpen, does it chip, does it rust, does that edge last well?

The SET testing results, included for the first time ever in a knife review, have been shown in isolation, as at the time of writing this test is still not fully proven. What I can say is that the results were in line with what I expected of D2. Those figures are a strong performance and the ability to recover means that there was no chipping. I’d say the heat treat on this by Viper Tecnocut has got it just right.

D2 by its very nature is going to be a bit harder to sharpen. Although I use a belt grinder, it is easy to feel how hard the steel is to sharpen, and the Jager’s blade was firm but not excessive. The only chipping I have experienced was when I dropped the knife onto a stone!

I’ve given the blade no special treatment, but also no abuse, and I was keen to get a patina to add to the stonewashed PVD (being stonewashed a lot of the PVD has been polished off), but so far neither the bare edge bevel not any other part of the knife have shown any corrosion.

The Oberland Arms nylon sheath has MOLLE compatible straps that are unlike any others I’ve seen so warrant a more detailed look. In this gallery I’m fitting it to a drop leg platform.

Before getting onto this is does lead me to mention why I chose to fit it to a drop-leg. With MOLLE straps, I typically arrange them so as to form a belt loop for the majority of my testing. The strap fixing design on the Oberland Arms sheath is not strong enough to do this with confidence. Unlike a press-stud fixing the fabric tabs were becoming deformed when making a simple belt loop and I had to use some auxiliary MOLLE strap I have (for pouches without any straps).

Going onto PALS webbing, the strap design is perfectly strong enough, and the effect is for the cross webbing to take the load. For a full weave, you will need to remove the kydex liner. In this gallery I did not do that, so the last weave is left undone.