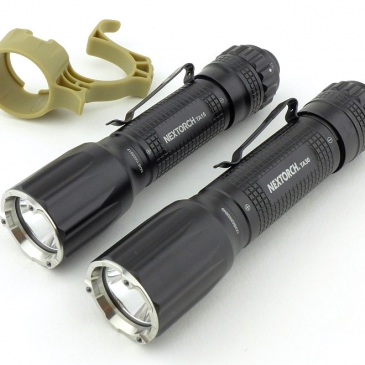 Nextorch have always seemed happy to be a bit different, which is great for us as we get products that are innovative and unusual. This review is of the Nextorch TA15 and TA30 plus the Nextorch FR-1 Tactical Grip Ring. The TA15 supports several different battery types and sizes, and along with the more powerful TA30, has Nextorch’s dual-function tail-cap with magnetic control ring and two-stage button. 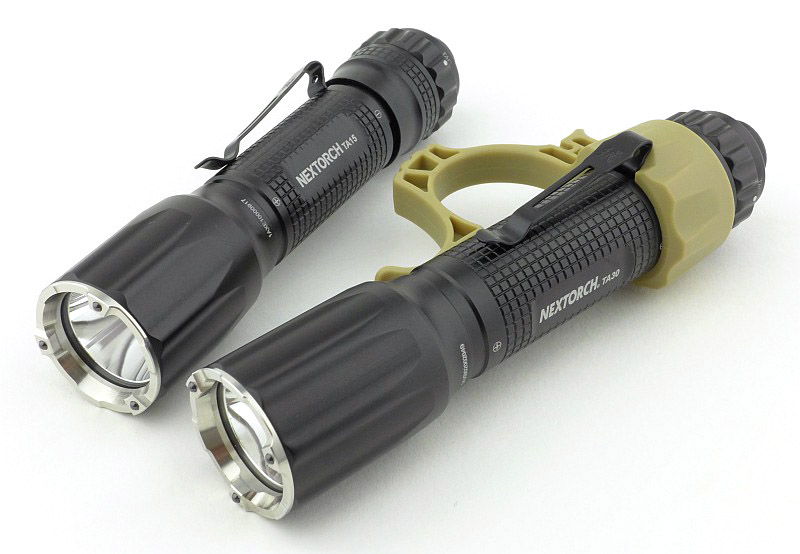 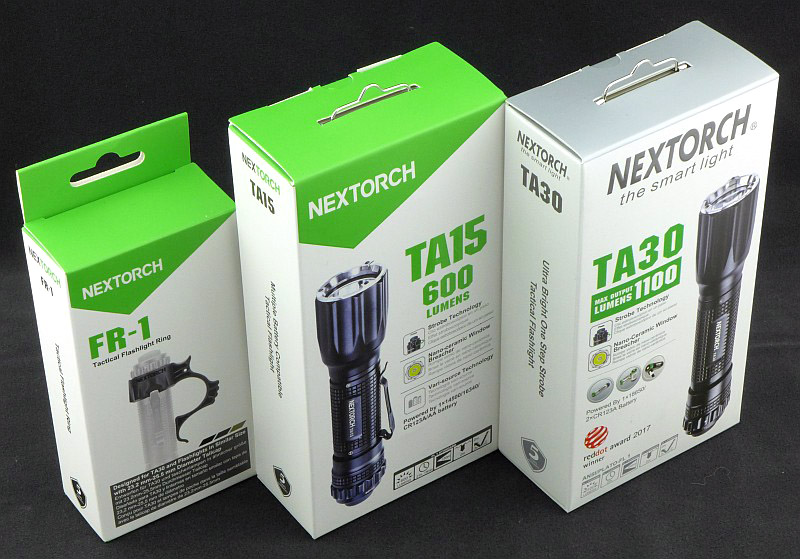 Taking a more detailed look at the FR-1:

With so much to look at, each model has a gallery of its own. This first one is of the FR-1 Tactical Grip Ring.


Taking a more detailed look at the TA15:

Next we take a look at the multi-power option TA15.


Taking a more detailed look at the TA30:

The slightly larger and more powerful TA30 is the last of the models we are looking at here.

The main feature to note is that the bezel contours where the nano-ceramic glass-breaker balls are fitted do cut into the outer spill of these lights; most obviously on the indoor beamshots.

In previous reviews I have detailed the actual UI, but with the ease of access to user manuals, this section will now only include observations or differences in the operation.

In the process of tightening the tail-cap you also turn the magnetic control ring to the ‘Tac’ position. ‘Tac’ mode is actually ‘Off’ but you have direct access to maximum output from the tail-cap button switch (and Strobe from the second-stage of this switch).

This also means that to change modes using the control ring you are rotating it as if unscrewing the tail-cap. Being used to twisty interfaces where you tighten the tail-cap to turn on and then go brighter this has been counterintuitive for me, and I still find myself twisting it the wrong way when wanting to turn the lower modes off or down.

Unfortunately I can’t see any way round this, as it is completely right that when tightening the tail-cap (after replacing the battery) you want the control ring to be returned to the ‘off / Tac’ position; you just have to try and get used to this.

It also means that when taking the tail-cap off to replace the battery, you generally end up gripping the control ring and twisting this (especially with the FR-1 fitted), so turn the TA15 and TA30 onto maximum or strobe until the tail-cap is loosened enough to lock it out.

There is parasitic drain which is different for each cell type used. For the:

The runtime graphs show the full traces, and a zoomed in section of the first few minutes of the run.

Starting with the FR-1, though described as being suitable for any standard size light (with tail cap of 23.2 mm to 25.5 mm diameter), as yet, I’ve not found any it works with beyond the TA15 and TA30. The tail-cap needs to be bigger than the battery tube, but for most of the lights I have, the tail-cap and battery tube are the same size. It does however work very well with the TA30.

Tactical grip rings do add bulk to a light, but they also give you so many grip options, which is why they are worth their weight in gold. From the simplest concept, that you can hang the light off a finger and actually free up that hand entirely to hold or lift something without putting the light down (think of it like wearing a ring with a very large stone in it). How you now hold it is only limited by your imagination.


Having got to grips with these lights, I am very impressed with the interface. Combining the rotary control ring with the two-stage tail-cap button has worked really well. From any mode, or off/Tac, pressing the button gives you direct access to maximum output. The two stage button switch has a good feel, being neither too stiff or easy to press, making the division between the half press for maximum output and full press for strobe well defined. Snatch the button and you will likely get some strobe, so if this is a big issue you’ll need to go for a single mode light.

Changing from pressing the button to rotating the control ring is natural. However, as explained earlier, the direction of rotation to change modes wasn’t intuitive for me, and I need to think about it. 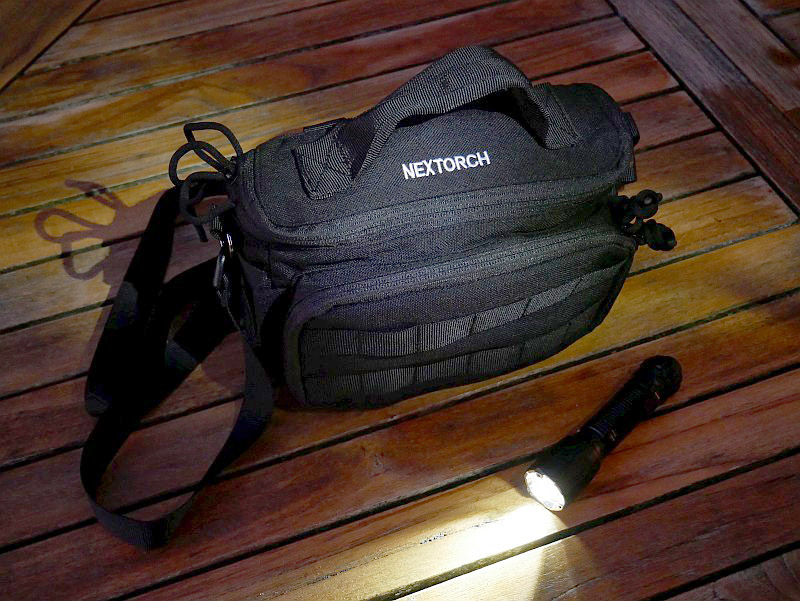 I like versatility; the TA15 gives you that, and is especially good as a light to have as a backup where you might need to scavenge cells from anywhere. The output does depend on the cells you fit, but this is not only sensible, as it better matches the output to the cells capacity (so not depleting them too fast) but it also lets the user choose their preferred output levels. I prefer lower output levels, so I generally run it on AAs. It really is very useful to be able to feed it such a varied diet, but you can end up with some cell rattle (mainly CR123) due to the mechanism needing to cater for the different cell lengths.

A minor point, which I raised with Nextorch, was that if using NiMh cells, the TA15 will often not switch from off to level 1, but needs to be turned onto level 2 then back to level 1. This behaviour seemed odd and only happened on NiMh AAs, but Nextorch explained that due to the low voltage, the TA15 was automatically going into a sleep mode to reduce drain to a minimum, and would only wake up when turned onto level 2. So this behaviour is designed into the TA15, and is specifically intended to reduce drain.

The TA15 and TA30 use the exact same interface and are in fact almost the same size. They handle very well and are extremely functional. 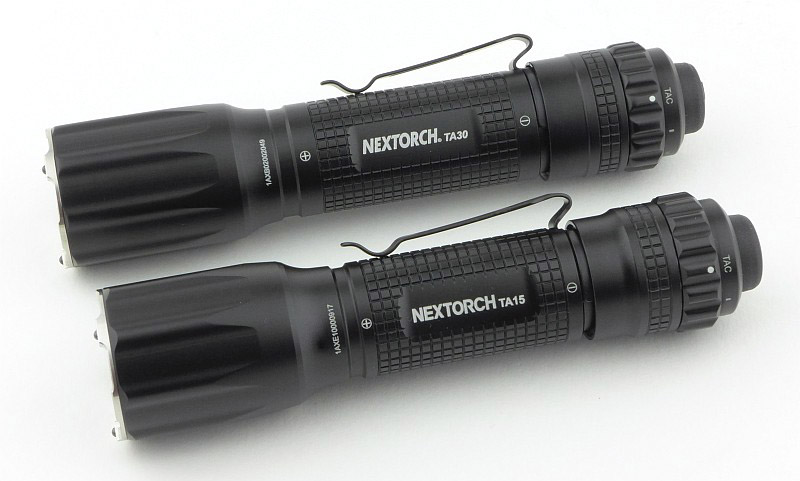 Still looking for an opportunity to try out the glass breakers… 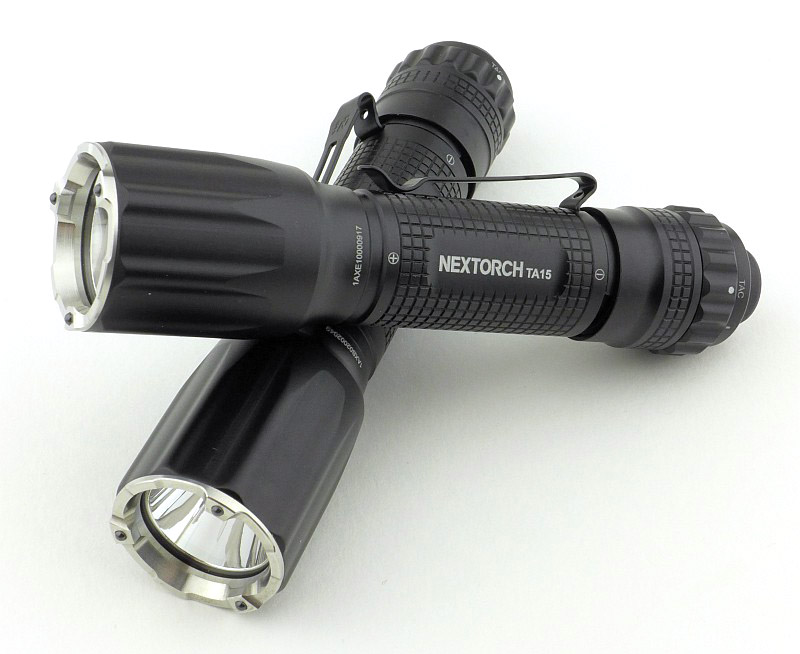