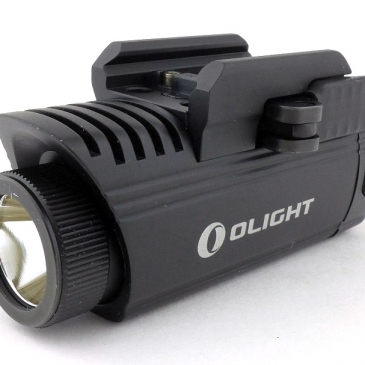 The PL-1 II is Olight’s refined and upgraded version of the original PL-1 weapon light. After a year of development Olight have dramatically increased the strength of the mounting mechanism which they claim will NEVER become loose or fall off of any firearm that has a rail. 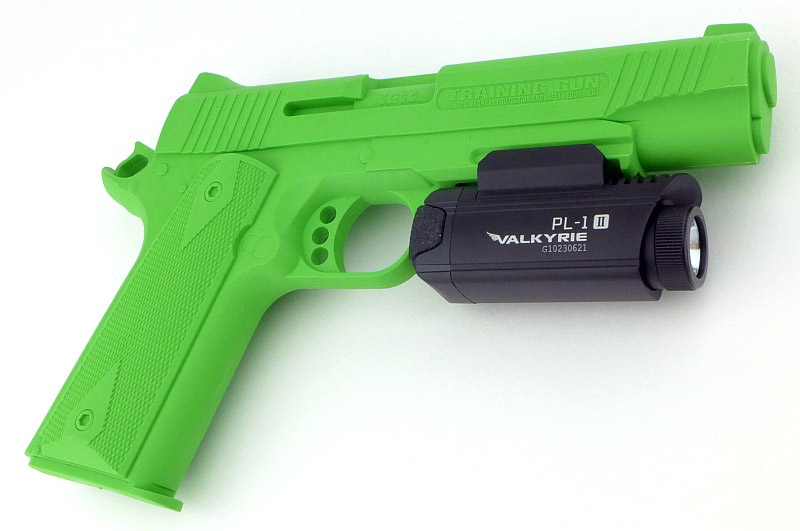 The PL-1 II Arrives in a cardboard box. 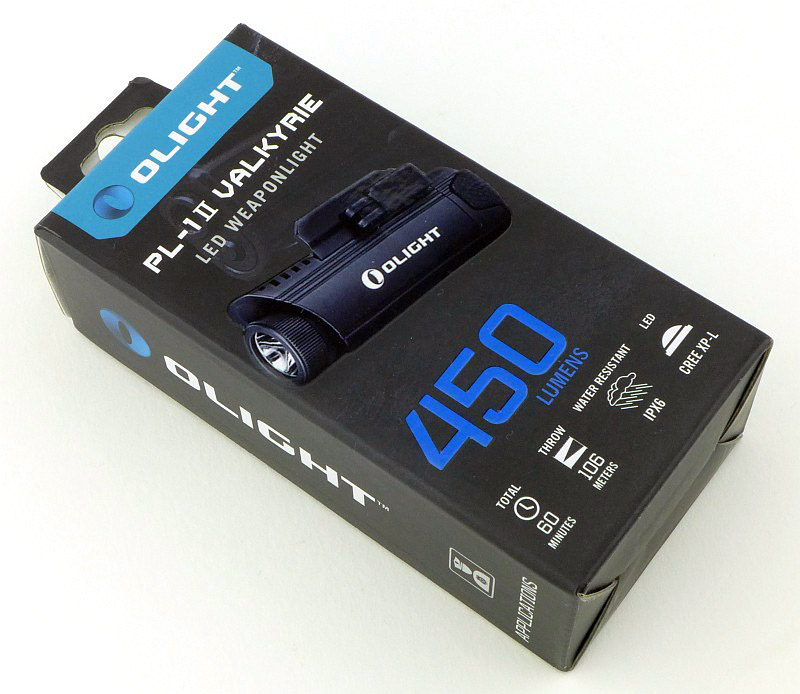 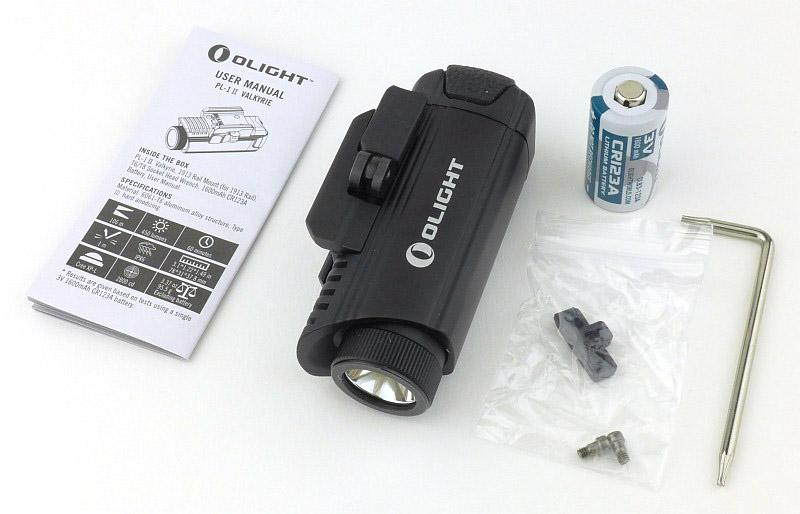 Being a pistol/gun light, the PL-1 II is a (mostly) snag free shape with a rail mount on the top. This side has the rail lock lever. 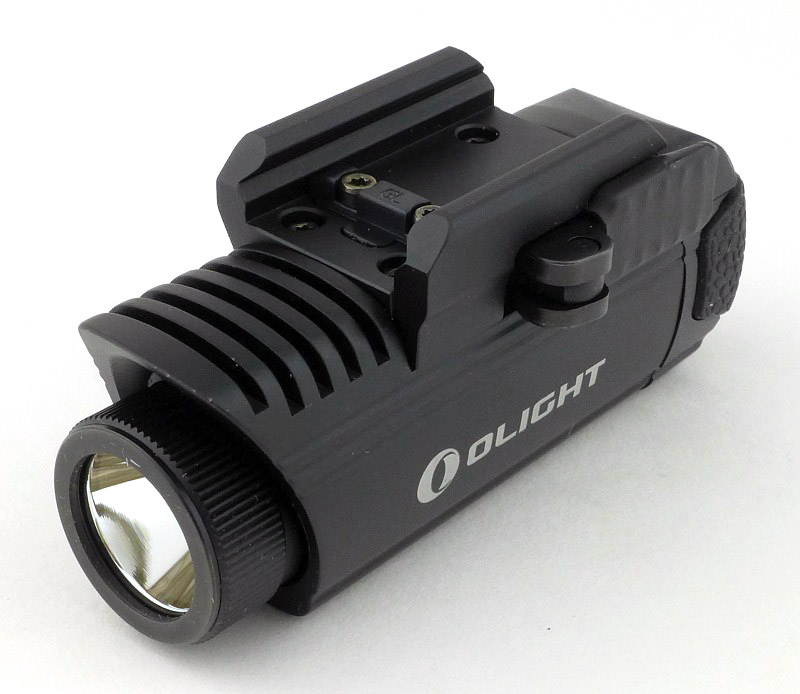 On the other side the rail clamp jaw is fixed. 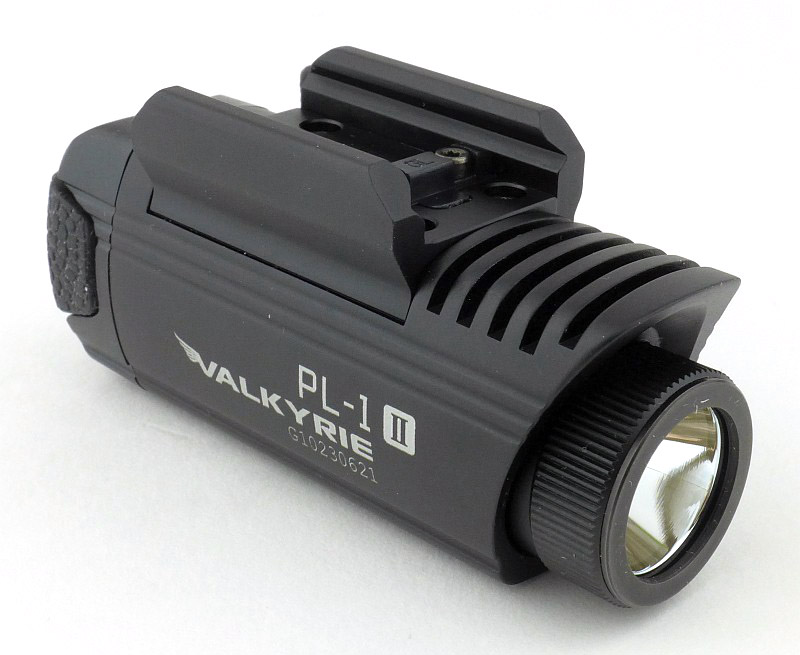 Rotating the lever 180 degrees to the front opens the rail clamp. 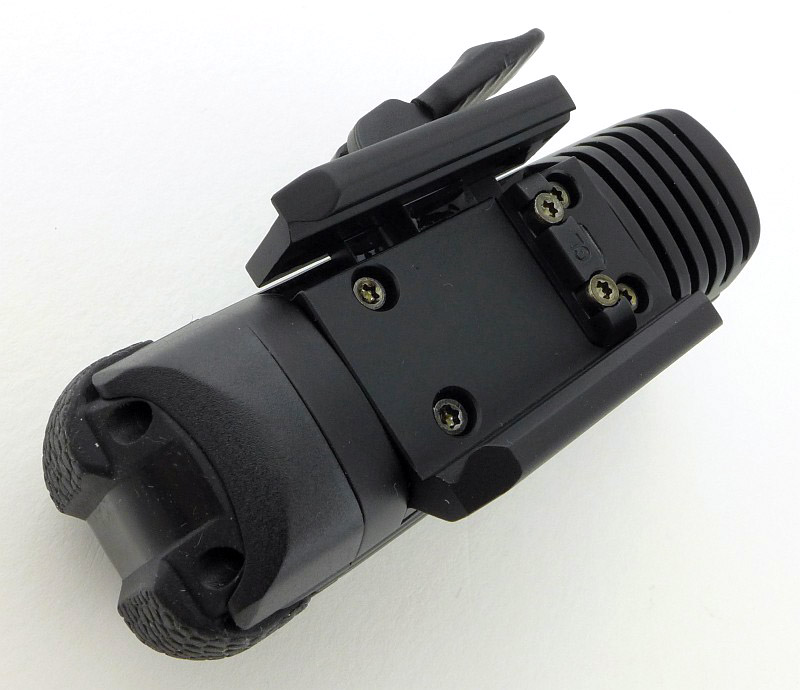 Already fitted is the GL (Glock) universal rail key. You can use this on just about any rail, but if you want the 1913 rail key for a more secure fit, this is supplied and is easily swapped out. 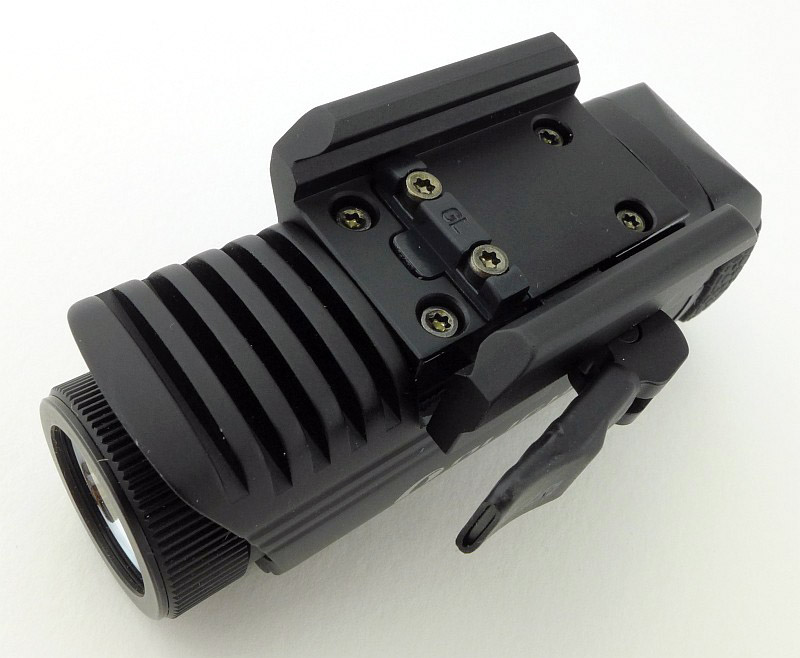 Rotate the locking lever 180 degrees to the rear to lock the clamp jaws in place. 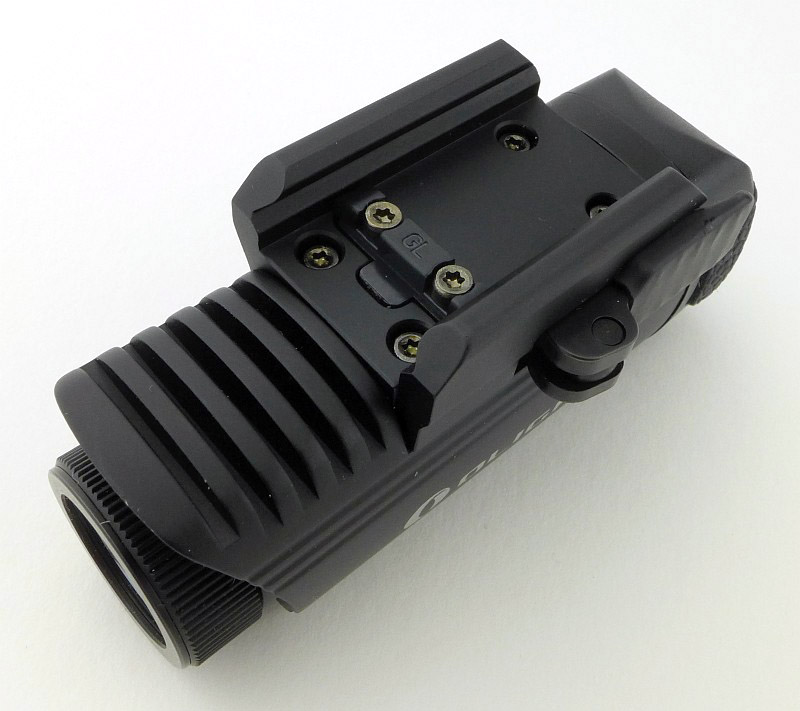 Limited by the size of the light, the reflector needs to focus the beam sufficiently for the ranges you are likely to need. 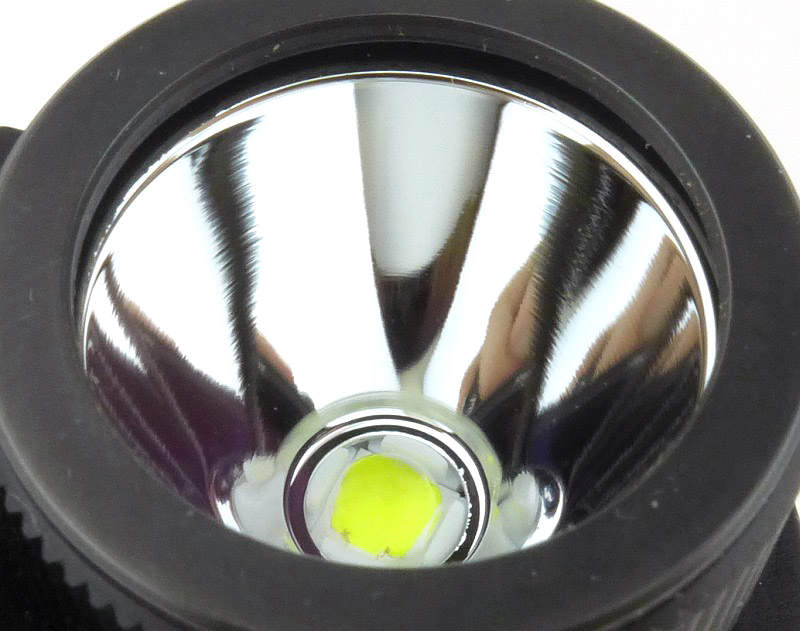 A Cree XP-L LED is used. 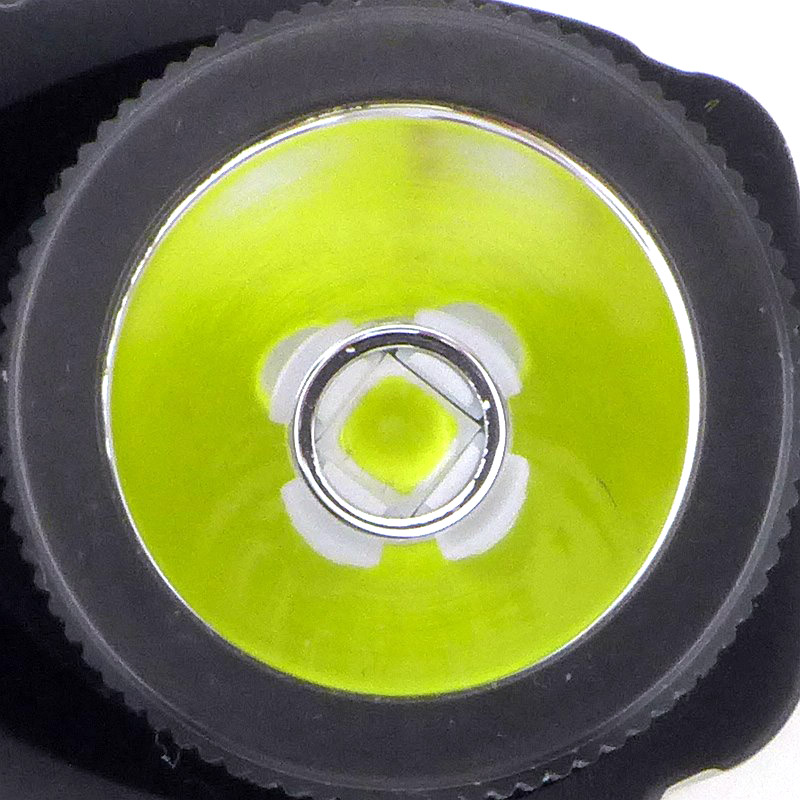 To insert the CR123 cell, unscrew the lens bezel to remove the LED / reflector assembly. 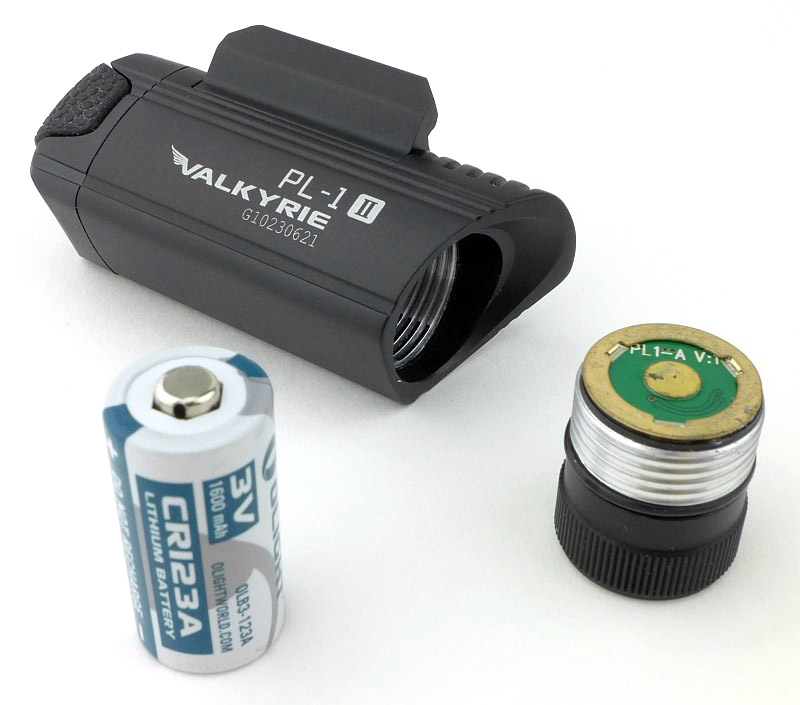 The threads are a nice square cut, bare aluminium, thread. 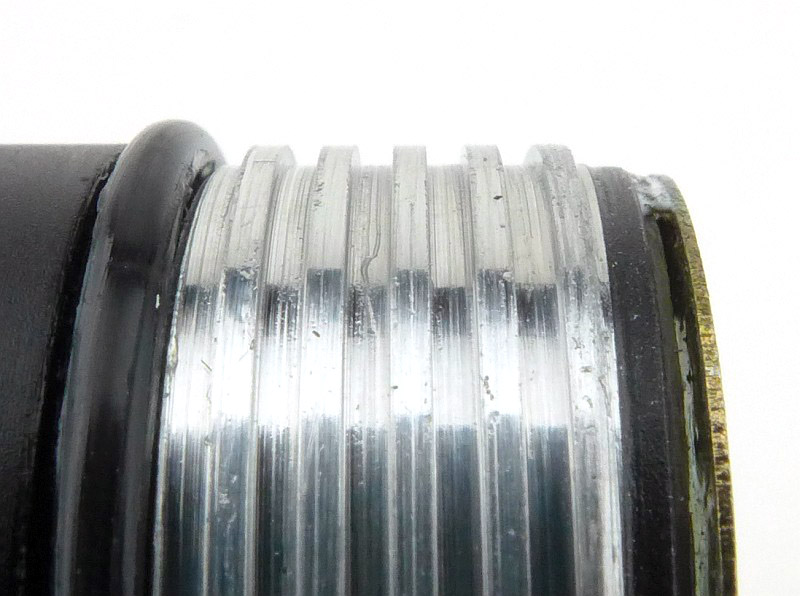 Robust solid metal contacts are used to connect to the cell positive terminal and to the body contact. These will not scratch off or wear out due to recoil forces. 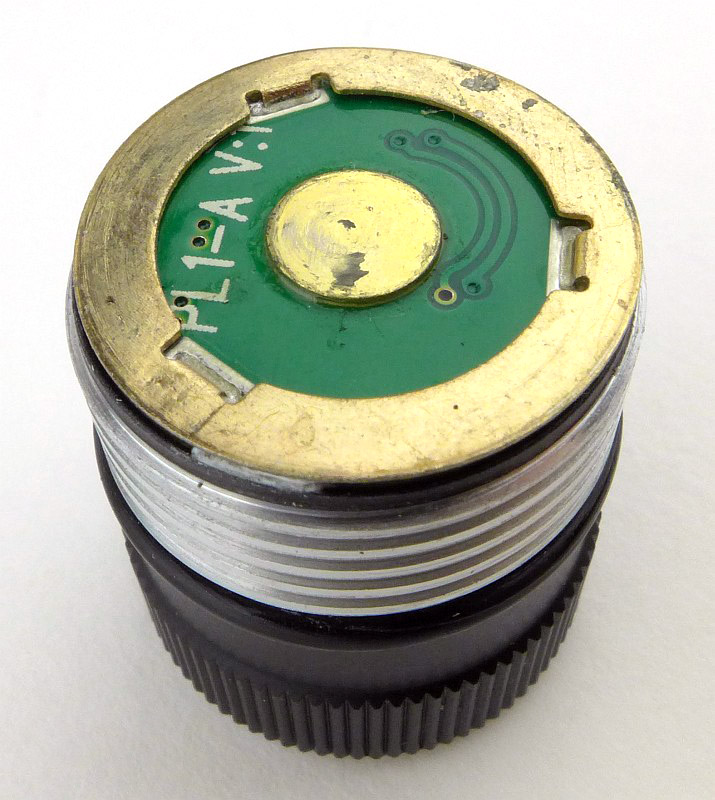 Inside the light the negative contact is a spring. Also note that surrounding the spring is a rubber buffer pad. 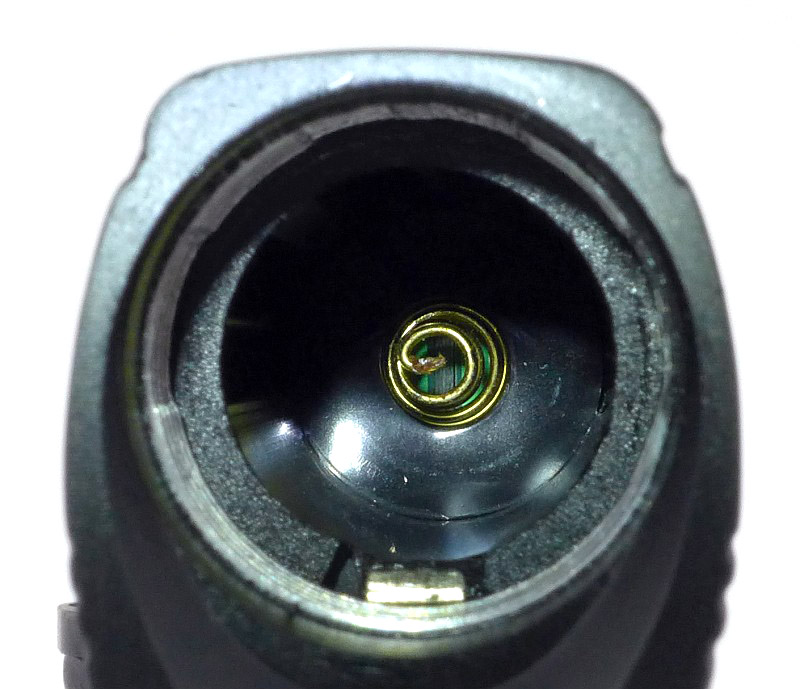 A cell is inserted with the head ready to screw back in. 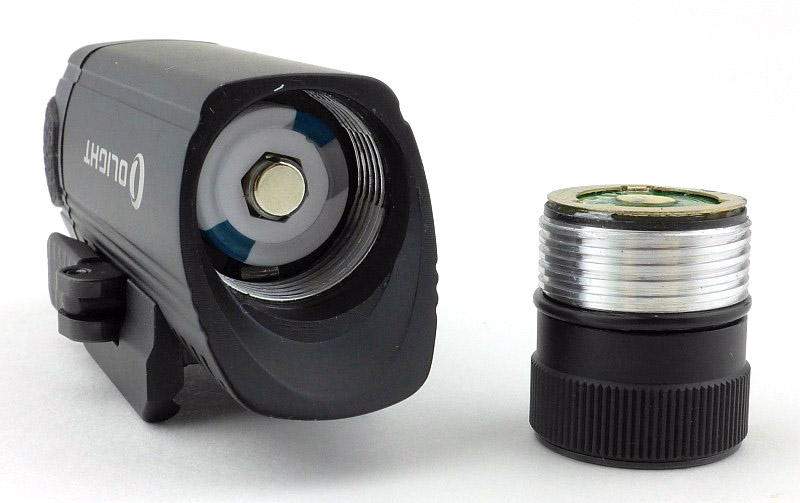 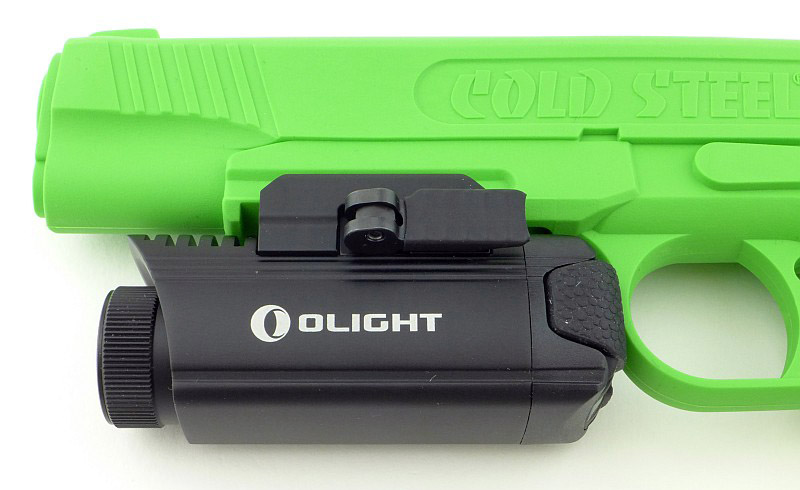 The switches are positioned just in front of the trigger guard, one on each side.

There will be more beamshots in the ‘In Use’ section, but here we can see a nice wide and bright hotspot with good width spill. 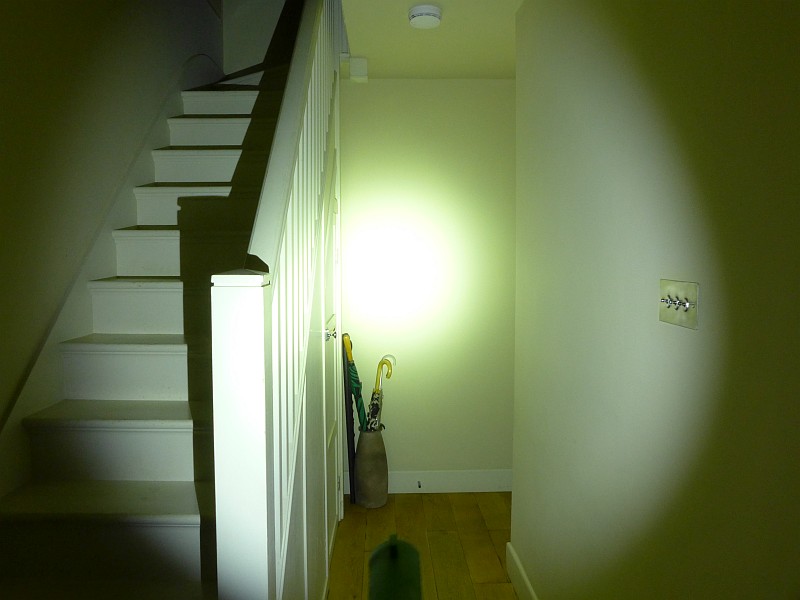 Control of the PL-1 II is intentionally very simple. There are three ‘modes’, Constant ON, Momentary ON and Strobe. There are two switches, one on each side.

To turn the PL-1 II ON Momentarily, press and hold either side switch. While you hold the switch the light will remain ON, and will switch off again when you release the switch (as long as the press is at least approx. 0.2s or longer).

For Strobe, press both side switches at the same time. To switch OFF briefly press either side switch.

There is parasitic drain but is incredibly low. When using CR123, the drain was 0.2uA (798 years to drain the cells) making it negligible as the cell will degrade long before it is run down.

You get a solid 30 minutes of good runtime, and a further 15 minutes where the output is still strong, before the output starts to really decline. Considering you won’t be using this light as a general light (as you only want to point this at potential targets) and won’t have it on all the time, this balance of output and runtime is a good match for how it will be used. 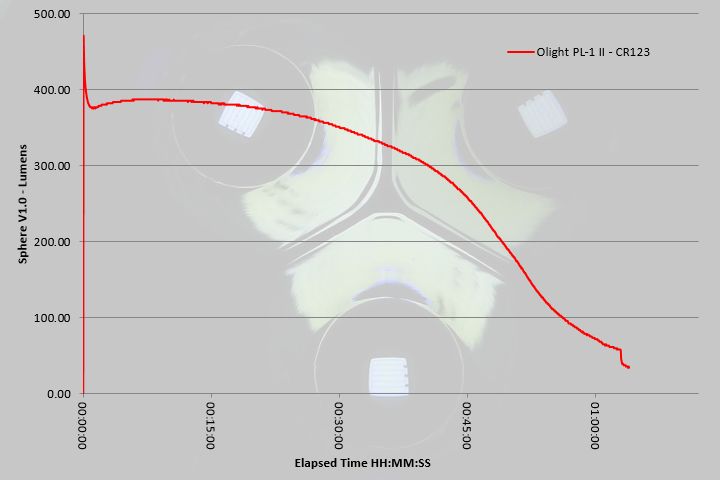 Crucial for any truly ‘tactical’ light (and a pistol light really is the definition of a tactical light) is that it is easy to use. In stressful situations you won’t be ‘thinking’ about how to use something, it must be instinctive.

Here the PL-1 II excels as the user interface is so simple you will be using it right out of the box. The only thing I found out from the instructions was how to activate the strobe. Regular readers will know I don’t have much time for strobe, so I wasn’t looking for it anyway.

It is important to stress that during testing, no part of the PL-1 II shook loose, but I must point out that compared to other similar products, the toolless mount, and screw-in head used in this light have the potential to work loose or be caught on something (in fact my laptop bears the scar of the PL-1 II coming off the gun due to the locking lever catching). This is a very small likelihood, but as other gun lights require tools to tighten the mounts, and won’t open the battery compartment unless removed from the rail, you need to consider both sides of the argument for quick release. Of course, with a toolless mount, you can easily take the PL-1 II on and off the gun (if your holster won’t accommodate a gun light) and you can change the battery while it is still mounted (though I would not recommend it, considering the easy of dismounting this).

The PL-1 II sits very naturally under the frame in front of the trigger guard. 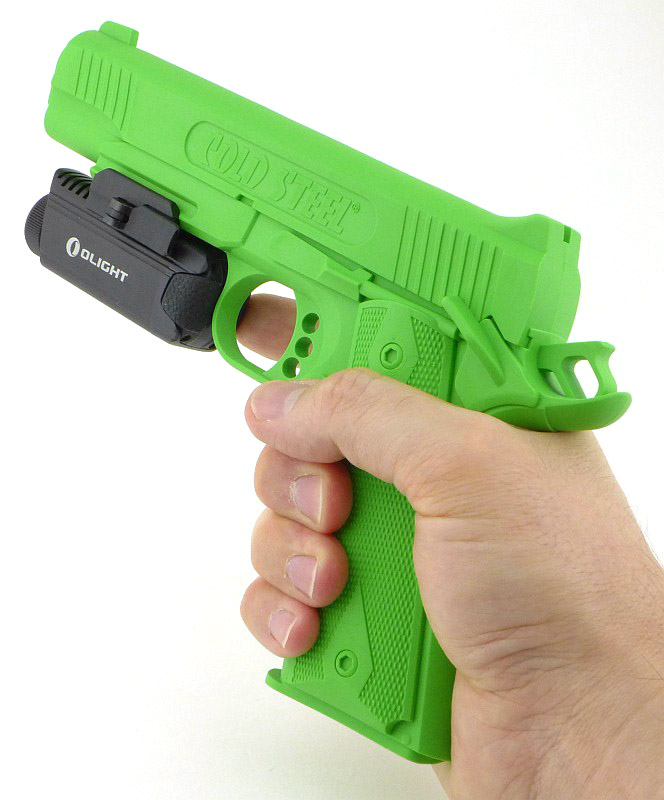 If your hands are big enough, you can activate the switch with your trigger finger, so not requiring a two handed grip to switch the light on. (Clearly not how you would use it in momentary output). 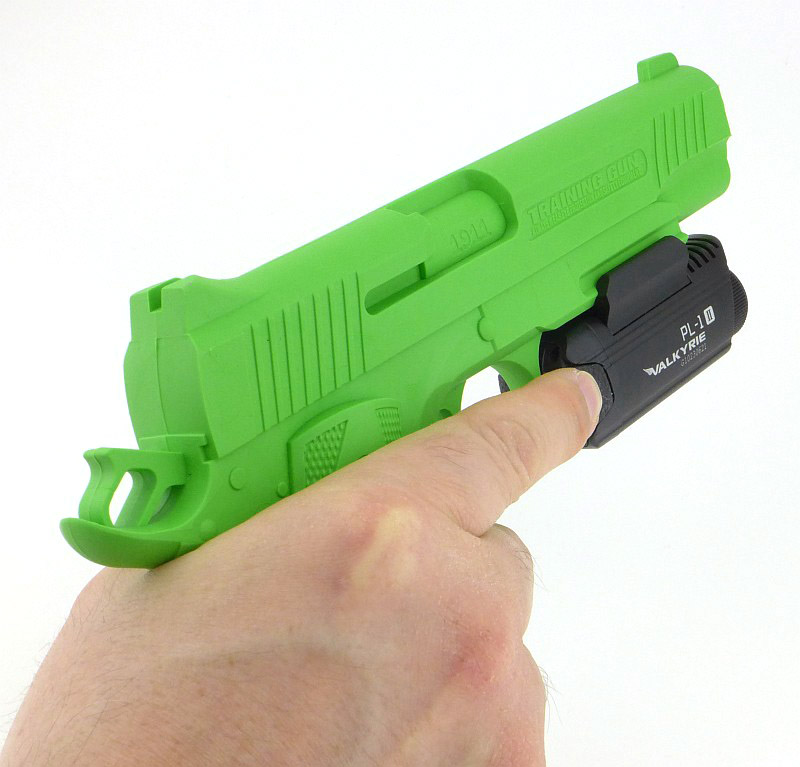 Now, moving onto the sight picture you get with the PL-1 II. Nicely aligned, the sights fall centrally to the hotspot, making pointing extremely natural. 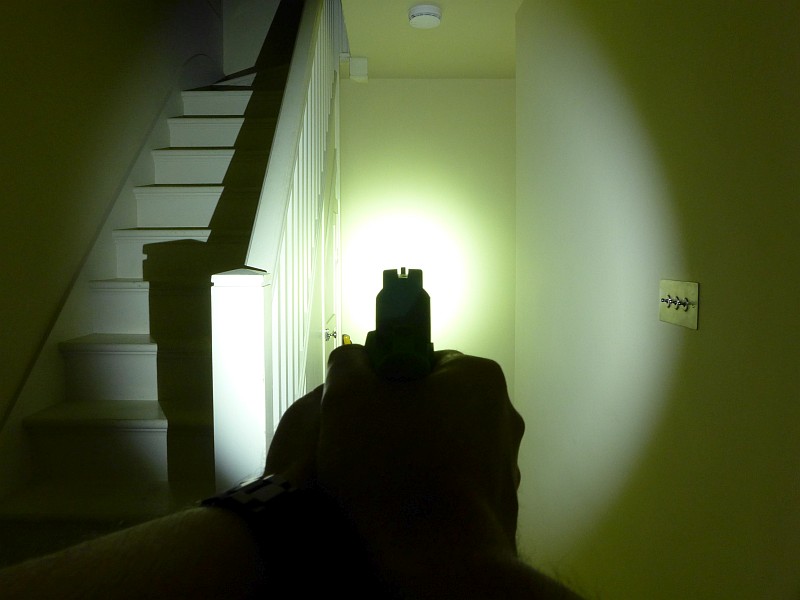 Maintaining your sight alignment and tracking for targets is easy, and at shorter ranges you can use the hotspot as a broad ‘laser sight’ so even if not fully behind your sights the hotspot provides a good guide to the shot placement. These images really speak for themselves. 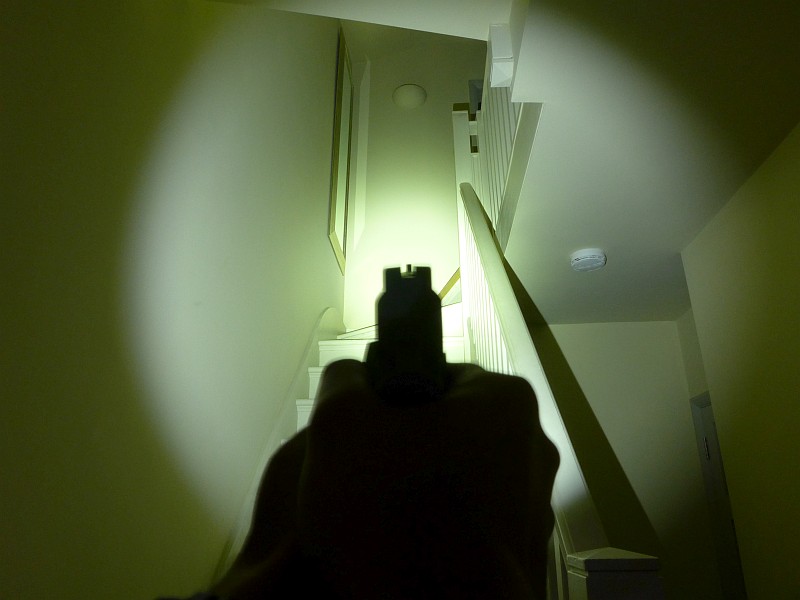 There is no significant change in balance in the gun as the PL-1 II is light enough at 95g not to weigh down the muzzle.

Overall the PL-1 II gives you and affordable, simple and apparently robust option for a rail mounted pistol/gun light. 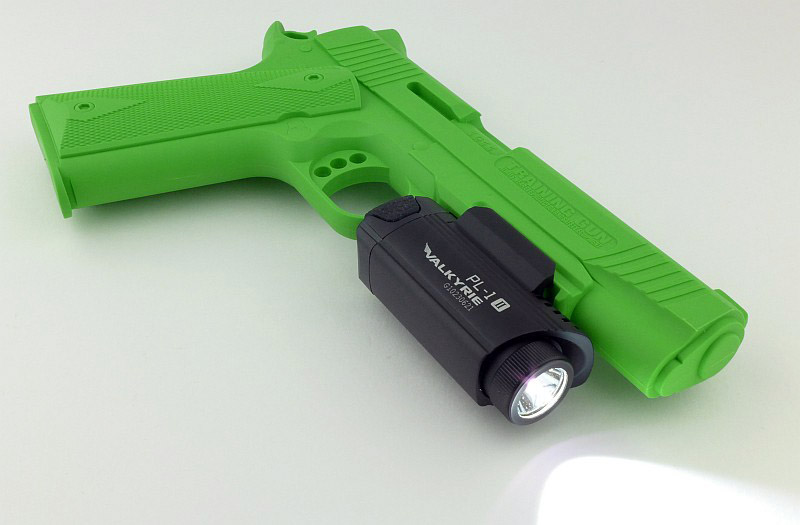