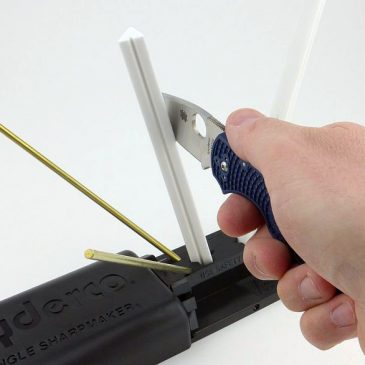 Spyderco’s Tri-Angle Sharpmaker is a surprisingly versatile sharpening system (based on the V-sharpener concept), designed to be simple to use, and make it easy to maintain a consistent sharpening angle.

Let’s dive into the details and talk about it more in the next section.

The Tri-Angle Sharpmaker arrives in a combined cardboard/blister pack. 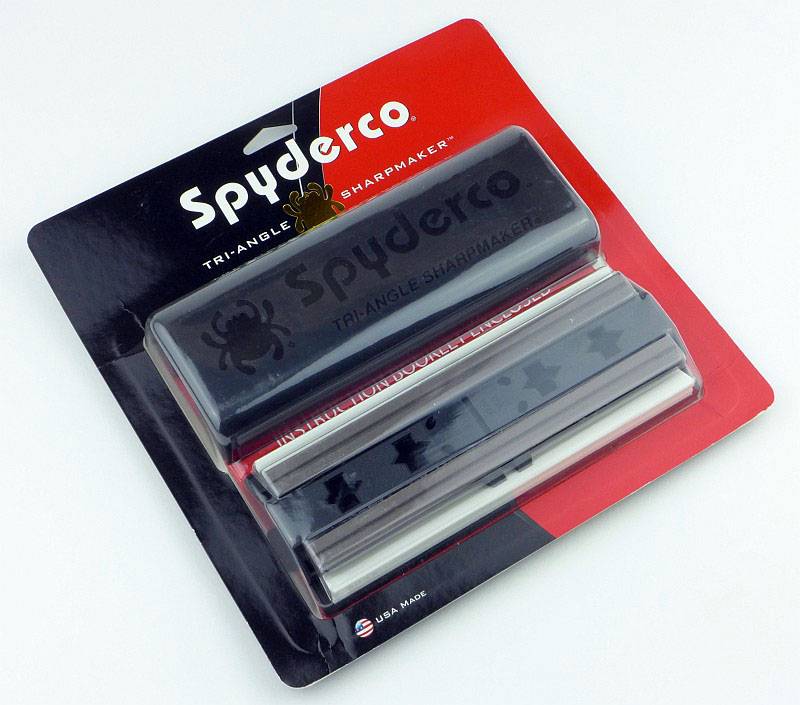 Included with the Sharpmaker is a set of instructions and an instructional DVD.

Breaking out all the parts, we have a lid to keep all the components in place, a base plate with various shaped holes, four high alumina ceramic stones/rods (a pair of brown/grey medium grit, and a pair of white fine grit) and very importantly two brass safety guard rods. 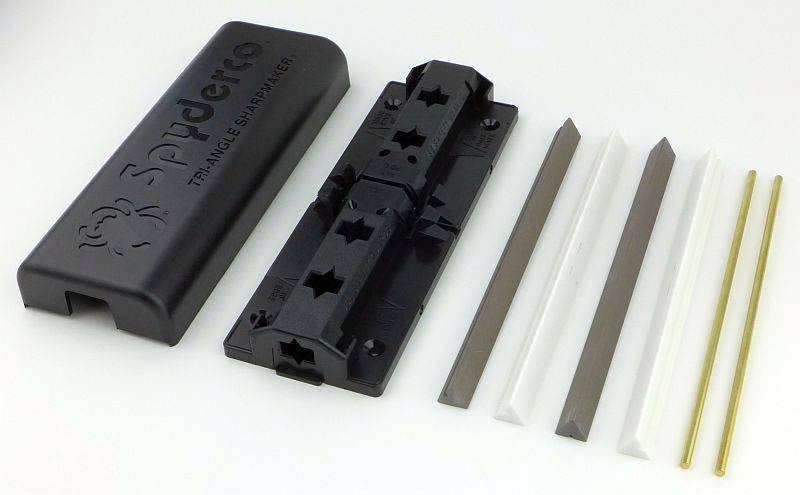 The FIRST thing you should do is to fit the guard rods (for whichever angle you are working to). Notice how the lid fits over the base at a halfway point to act as a handle. 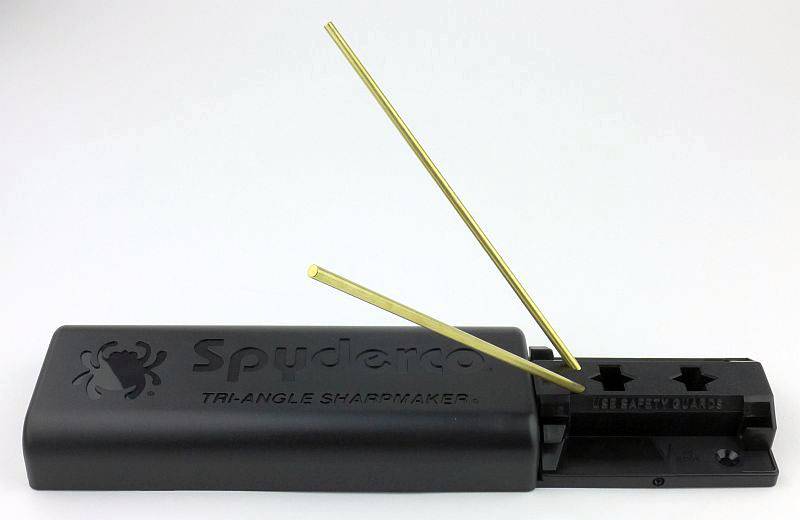 These guard rods angle back over the user’s hand to prevent stray sharpening strokes testing the edge on your hand. This is all the more important for experienced users as they tend to work faster and with less care. 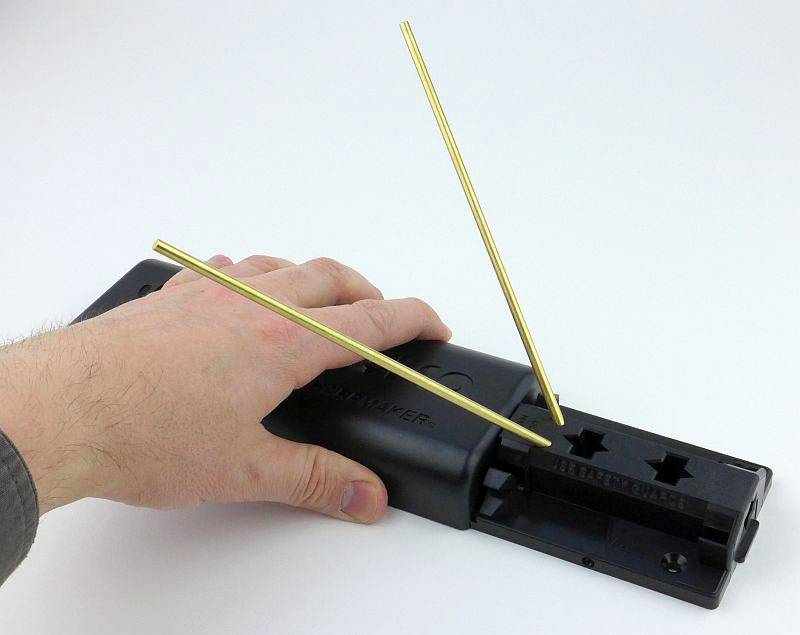 Just in case you forget – ‘USE SAFETY GUARDS’. 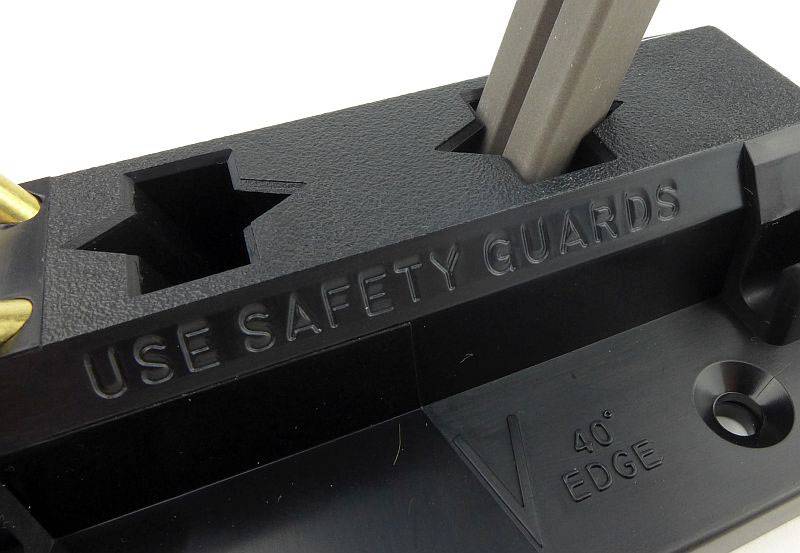 The two types of stone included with the Sharpmaker (shown here in perfectly clean and unused condition). 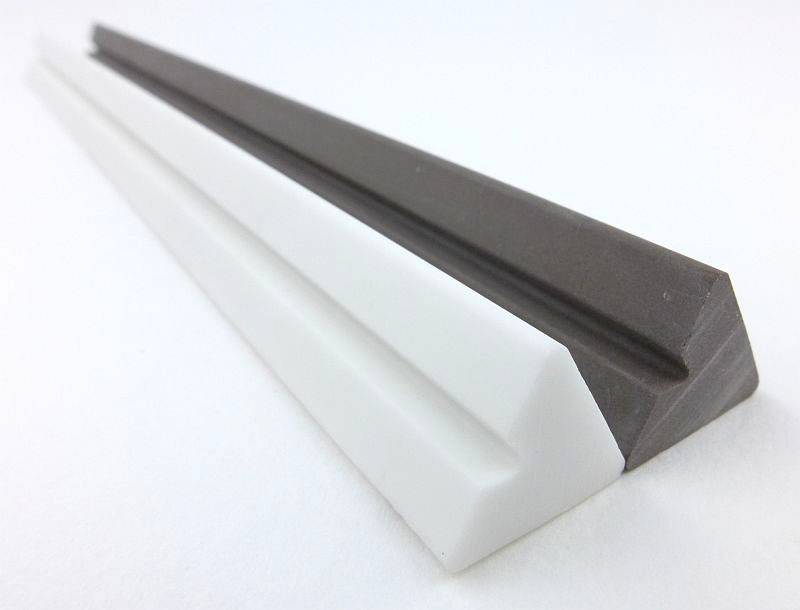 So why are those holes the shape they are? It’s all very clever actually. The Tri-Angle Sharpmaker, comes with …. yes, tri-angular stones. The stones also have a groove in them for hooks and other pointed objects.
This means we have three different working surfaces on the stones, the flat side, a pointed corner, and the groove. Here we have the stone fitted into the base so that we use the flat surface. 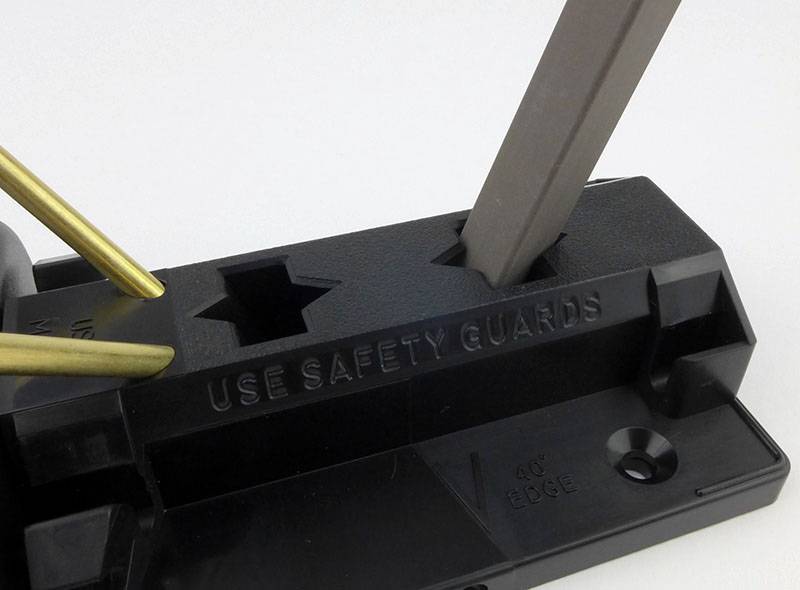 Now, taking the stone out and rotating it, it can be fitted back into the base with the corner as the working surface. 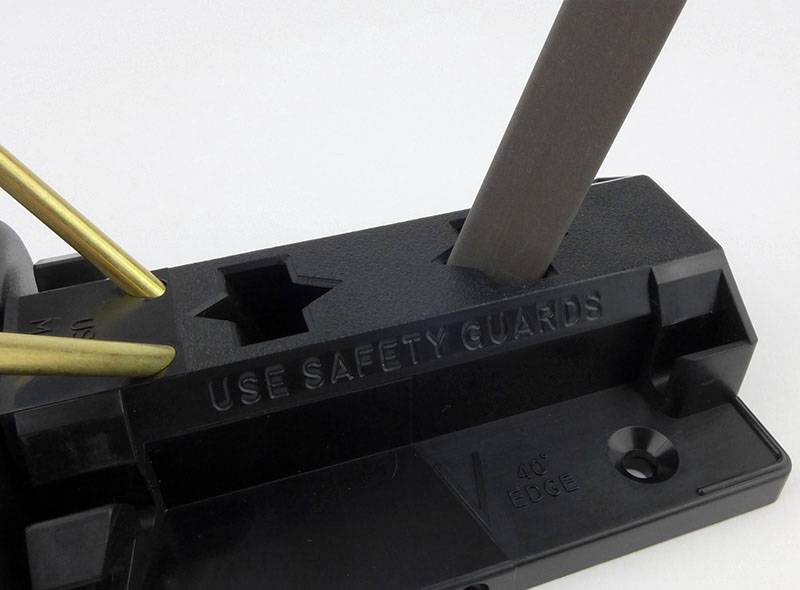 Lastly the grooved flat surface is presented for working with. All with one hole that holds the stone at the correct angle. 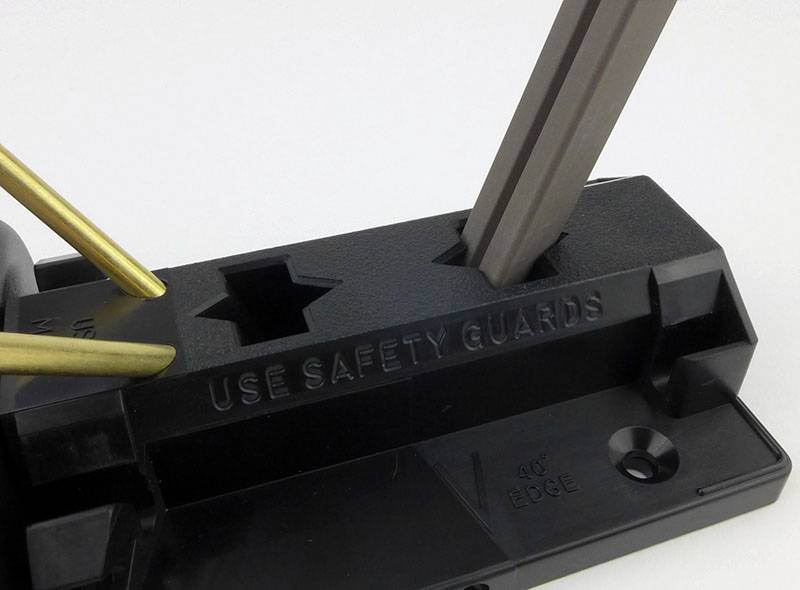 Here we are, fully assembled with ‘stage one’ sharpening (the coarsest arrangement) and on the 40 degree inclusive angle. 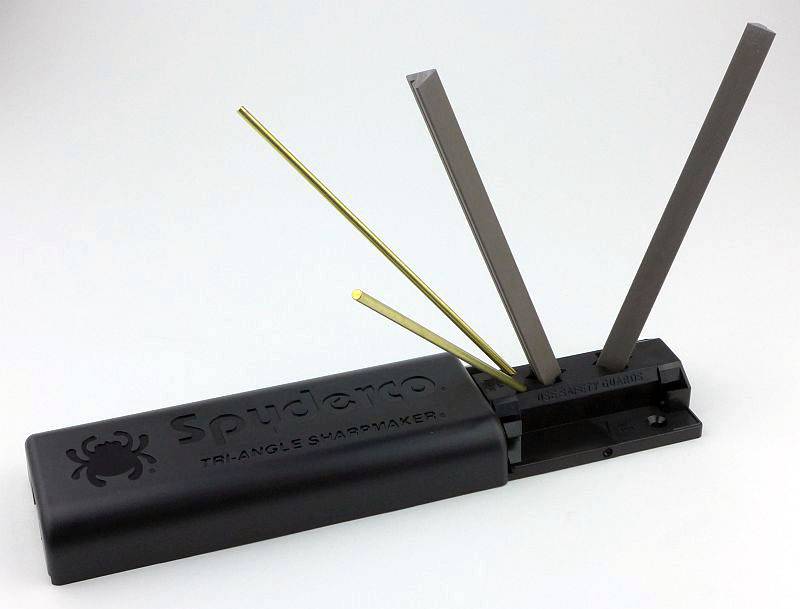 Some of my most used sharpening stones are a set of Spyderco pocket stones, so I know how well the Spyderco ceramic stones perform. However, once you start using diamond stones they can seem a little slow, especially on some of the super-steels.

Though not strictly a guided system, I’m going to consider it one to mention the very specific benefit of these systems, which even people with considerable sharpening experience should not dismiss. Quite simply, guided systems help reduce the amount of steel you need to remove to restore an edge. This means that as well as making the sharpening process easier for everyone, it also makes it more efficient. You only remove as much steel as is needed which prolongs the life of the blade and makes sharpening quicker.

With the triangular stones, this is one of the few systems that can sharpen serrations, and is also happy working on hawksbill and recurve blades. To understand fully why, we need only look at the four ‘grades’ of sharpening that are achieved from the two stones.

In order, from most coarse to finest, we have these configurations of the stones:

The Sharpmaker base also has two sets of holes which give an inclusive angle of 30 degrees or 40 degrees. In the design of the Sharpmaker, the 30 degree angle is primarily intended to be used for creating a ‘back bevel’ (to thin out the edge). Though some knives might be sharpened to this 30 degree angle, the 40 degree angle is considered by Spyderco to be the best compromise for most blades.

Serrations can be sharpened thanks to the corners of the stones, meaning steps 1 and 3 can be used. Spyderco recommend that only the step three (white stone corners) is used, as step one is a bit too aggressive. Serrations need a slightly different technique, as generally they are formed with a single bevel (chisel) grind. In this case you work only on one side for three or four strokes, then use a single stroke on the other side to remove the burr that forms.

For flexible blades, you only use the corners (steps 1 and 3) as it is difficult to keep the edge sitting on the flat surfaces.

Having covered some of the theory, let’s get back to looking at the way you use the Sharpmaker. Here is a knife in mid-stroke having started at the plunge/ricasso and being draw down and backwards towards the tip, to run the entire edge over the stone on one side. 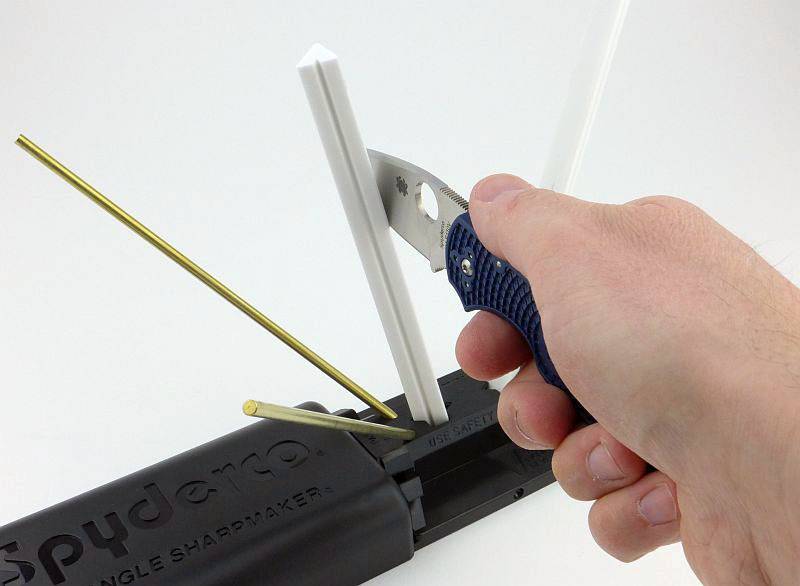 Looking directly from behind the knife, this is the critical aspect for the Sharpmaker – you keep the blade held vertically at all times, the stone angle is then determined by the Sharpmaker. Visually, keeping the blade vertical is the easiest position to judge, much easier than any other angle. 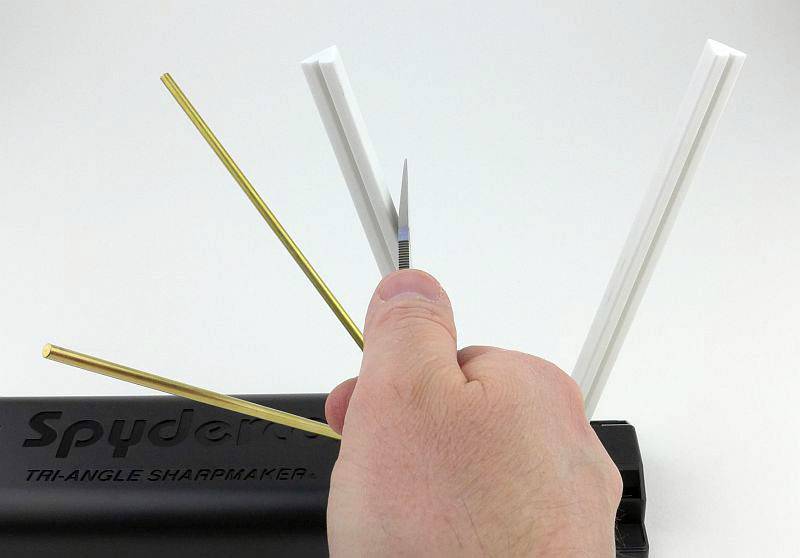 Having given one side of the blade a stroke, swap to the other side. Then just keep alternating sides for each stroke. Once you have given each side 20 strokes, you can move to the next stone configuration, refining the edge each time. 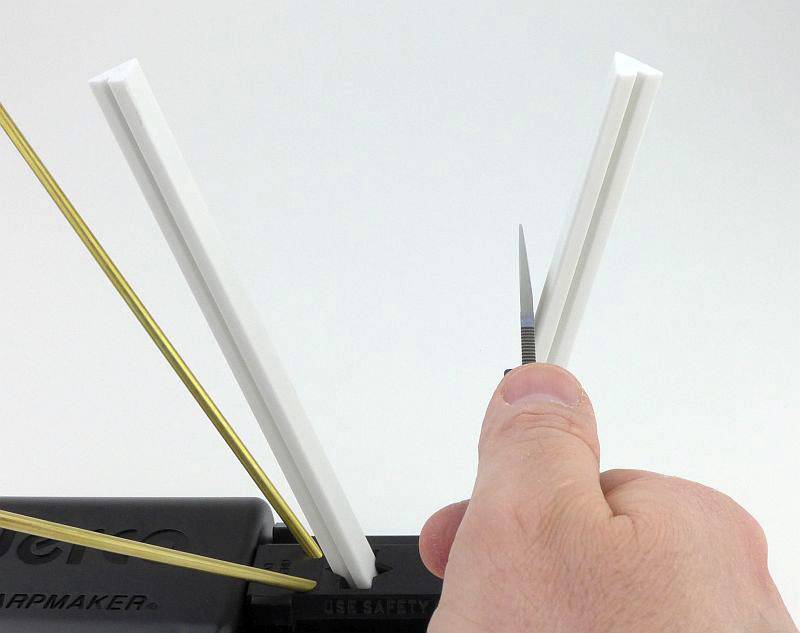 MAKE SURE YOU USE THE SAFETY GUARDS – Can’t stress this enough. I’ve hit them several times during the testing for this review, and would have cut my hand if I had not fitted them.

In one end of the Sharpmaker is another hole for a stone, this time using only one stone at a much lower angle. With a single stone mounted in this position you can sharpen scissors in the same way as you sharpen a knife. Keeping the scissors vertical and stroking the blade across the stone. To take off the burr on scissors you need to use the other stone like a file and lay it onto the blade flat. Doing this will give you a better burr removal than just closing the scissors. 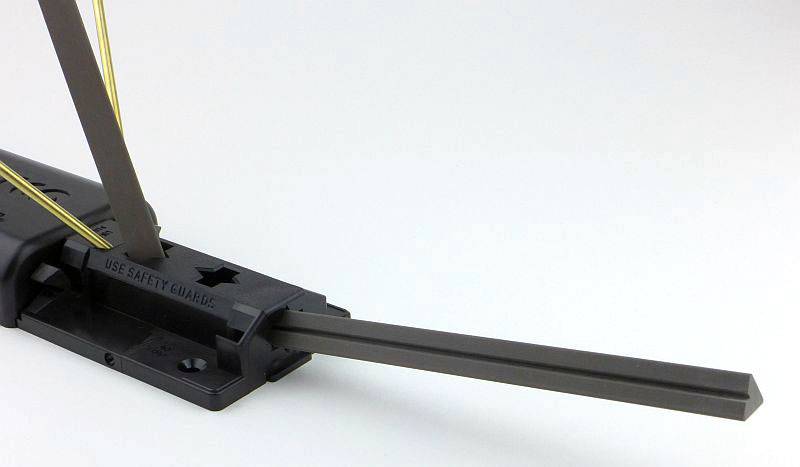 Also included in the design are two bench-stone options. Using the top channels in the base gives you a wide stone surface for large blades. 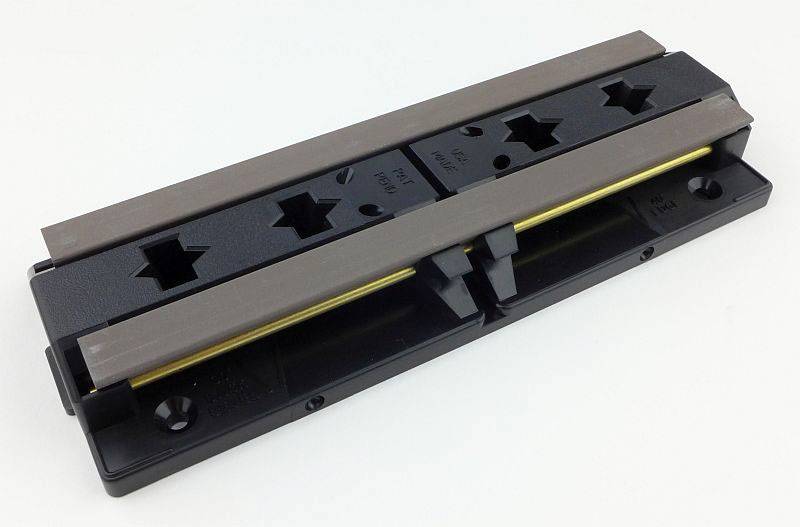 Flipping the base over and it has two grooves that are close together for sharpening smaller tools like chisels. 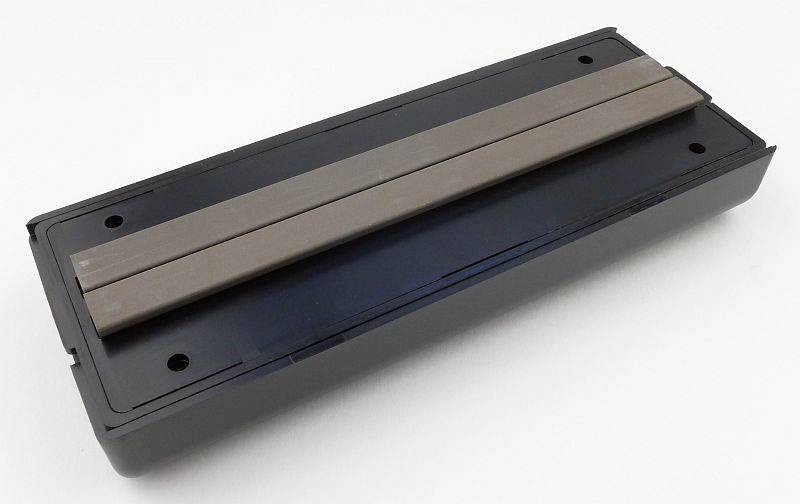 I’ve already mentioned a couple of characteristics of the Sharpmaker that become quite relevant to start with. Especially compared to diamond, the ceramic stones are not the fastest cutters, and add to this a design that helps keep the overall removal of metal to a minimum by maintaining the angle, and you get a sharpener that can be hard work if you need to reprofile a steep edge angle.

(NOTE: When new, the brown/grey stones have a slight glaze that initially slows the cutting down. This glaze will wear through after a few sharpening sessions, but you can rub the two new stones together to speed this up and improve the cutting performance sooner.)

When starting to use the Sharpmaker, your bevel might not be at 40 degrees, so you can use the marker pen test to see if your bevel angle matches the Sharpmaker. If your initial bevel angle is less than 40 degrees, then you can just touch up the very edge and you don’t need to fully reprofile. Here the remnants of the marker pen are visible where the stones have taken off the ink from the full edge bevel itself. If you find the 40 degree stone angle is only working on the back bevel you are going to need to reprofile. 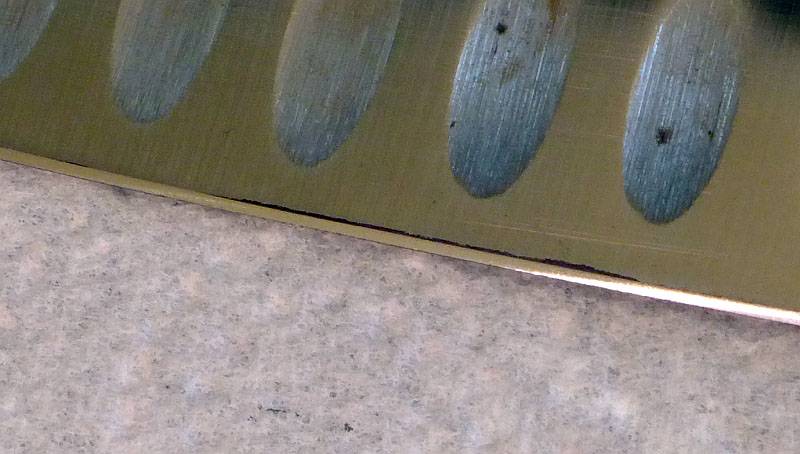 This knife which had a badly damaged edge (from being thrown in with the rest of the washing up) has been restored by running through all four stages and then tested with some thermal receipt paper which simply fell apart on the edge. 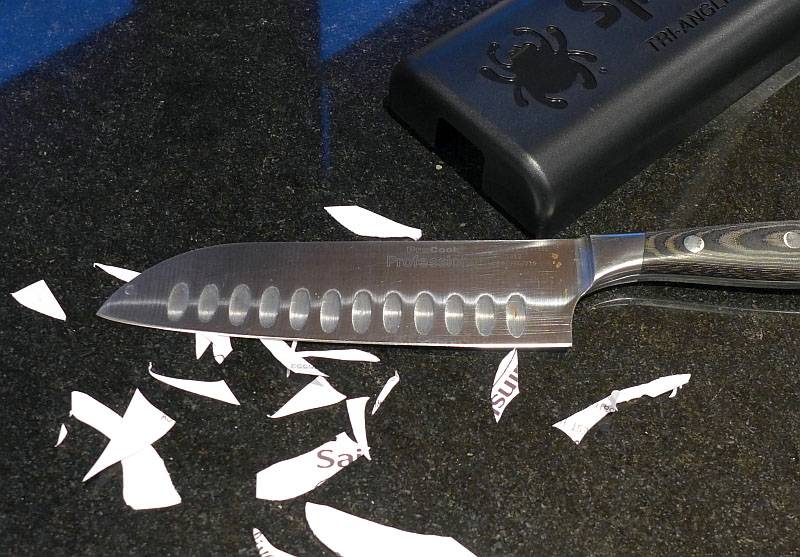 As mentioned above, most sharpening systems actually improve with use, and it was during this session of sharpening a set of sewing scissors that the stones of the Sharpmaker really developed some bite. The difference is significant and you can feel the stones cutting much more aggressively than when new. Perhaps more so than with knives, the process of keeping the blade vertical and drawing it across the stone makes it so easy to sharpen scissors. It only took around 20 minutes in total to get all of these scissors cutting beautifully. 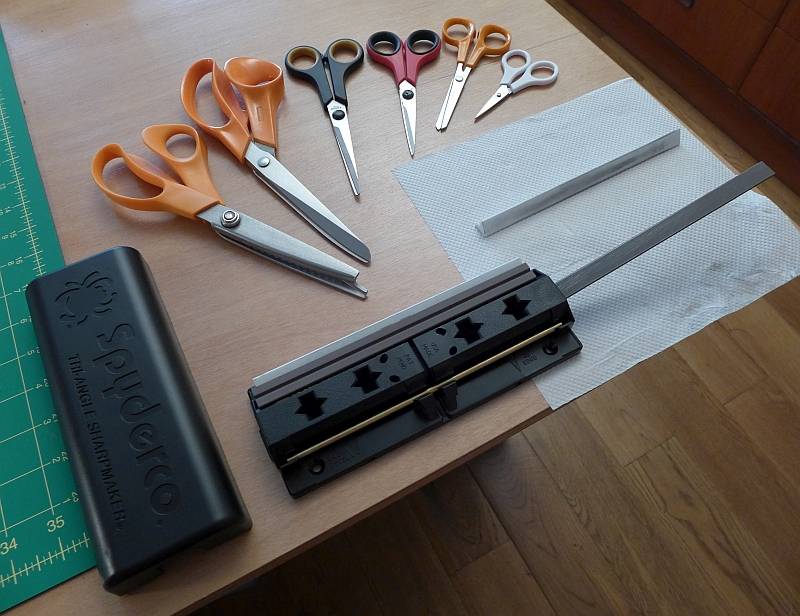 Not only is the Sharpmaker simple to use, it is simple to transport and set up. The ceramic stones are used dry so there is no oil/water mess while working, and you use normal kitchen/bathroom cleaning products to clean the stones when clogged. I take it with me to friends and family and into the office kitchen to touch up the edged casualties and give them new life.

The Tri-Angle Sharpmaker is NOT just a knife sharpener and I recommend you watch the Spyderco videos that show just how versatile this sharpener is.