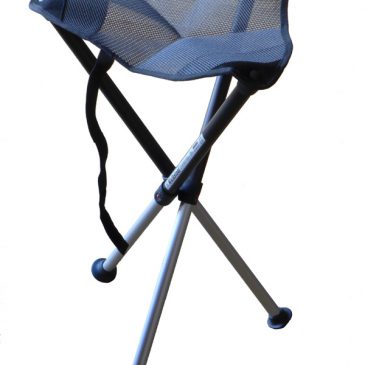 It was at IWA 2016 that I came across Walkstool on my way to another appointment. As soon as I saw their telescopic folding stools I felt they were worth further investigation, and after a demonstration by Pius Schmitt (who is featured in the Walkstool website videos) didn’t need any further persuasion; I knew this was something special. 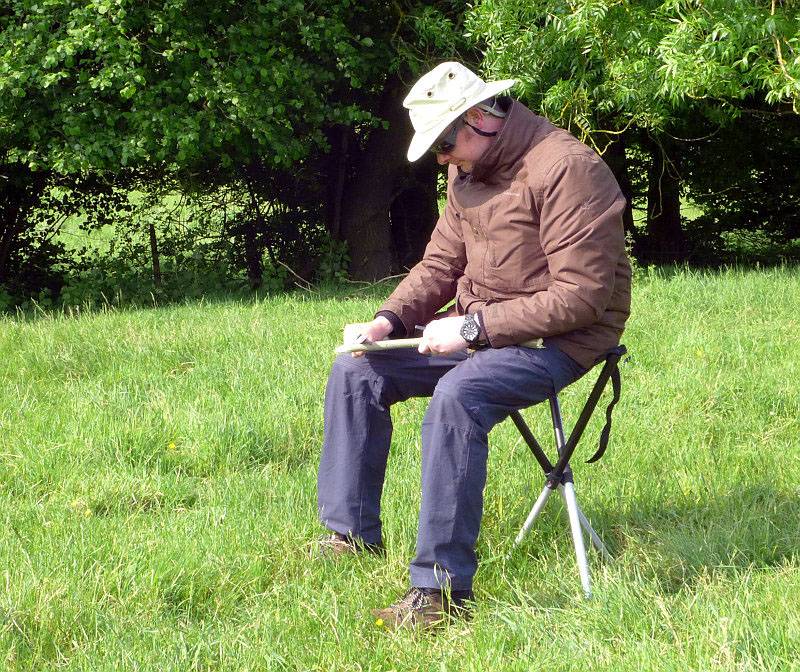 Background, but not about Walkstool, instead about me and portable seating. Maybe it is a sign of age, or maybe just being in favour of comfort, but I’ve used some form of portable seating whenever I could carry it on various trips and outings.

The compromises in size and weight have always resulted in anything comfortable being large and heavy and not very portable, and anything small and light being really quite uncomfortable and generally too short for comfort.

At IWA I was not looking for anything like Walkstool’s Comfort (65cm model on test here), but it simply stood out. As soon as I saw that there were several different sizes, that the legs were telescopic (making them nearly 50% smaller when folded, and giving you two sitting heights) and the strong comfortable seat, the Walkstool had me interested.

The Walkstool family with the two Basic models on the left (made in China) and the four Comfort models (made in Sweden).

Each Walkstool comes in a carry bag that can be carried over your shoulder. 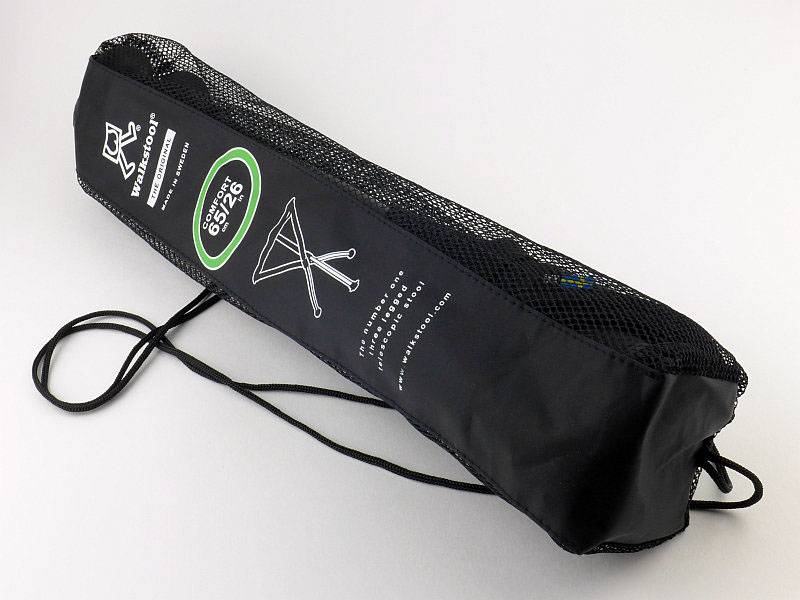 When folded it is an extremely neat package. 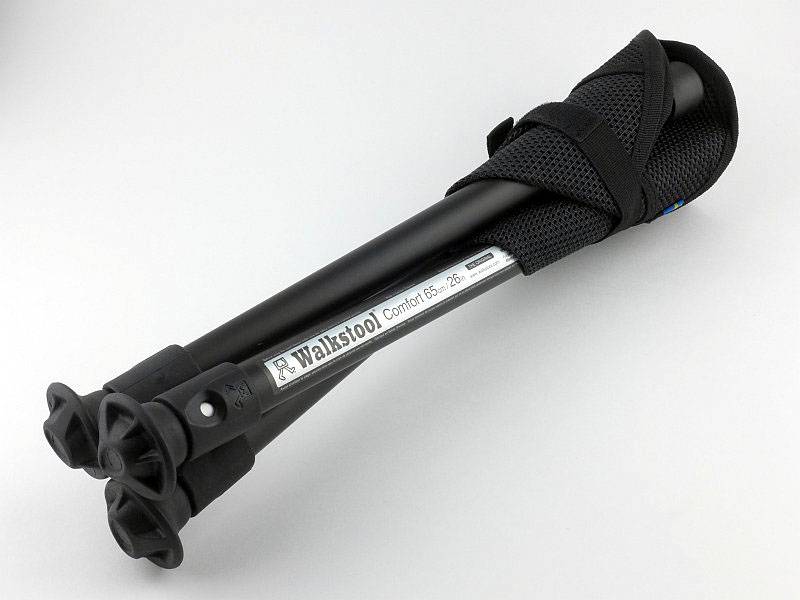 Wrapped round the seat is a strap with Velcro fastening to hold the stool tightly closed. 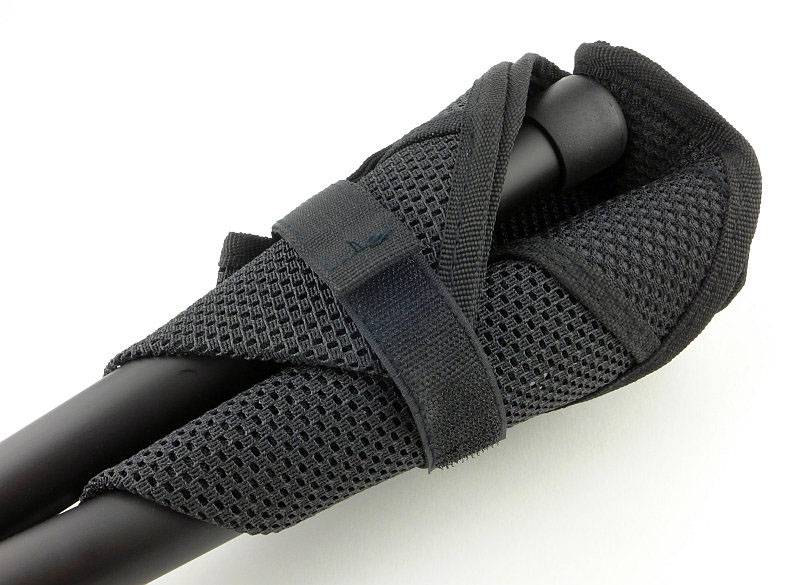 Just tear back the free end of the strap to open. 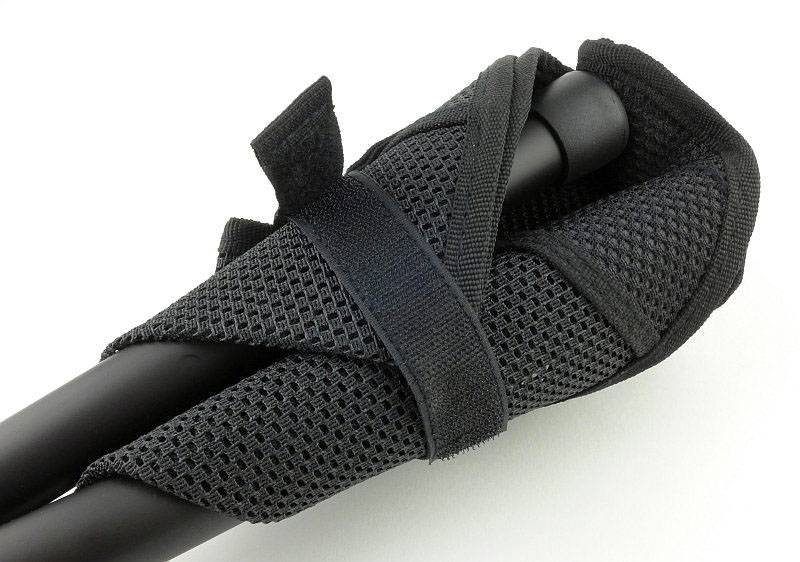 Once released the seat material starts to open up 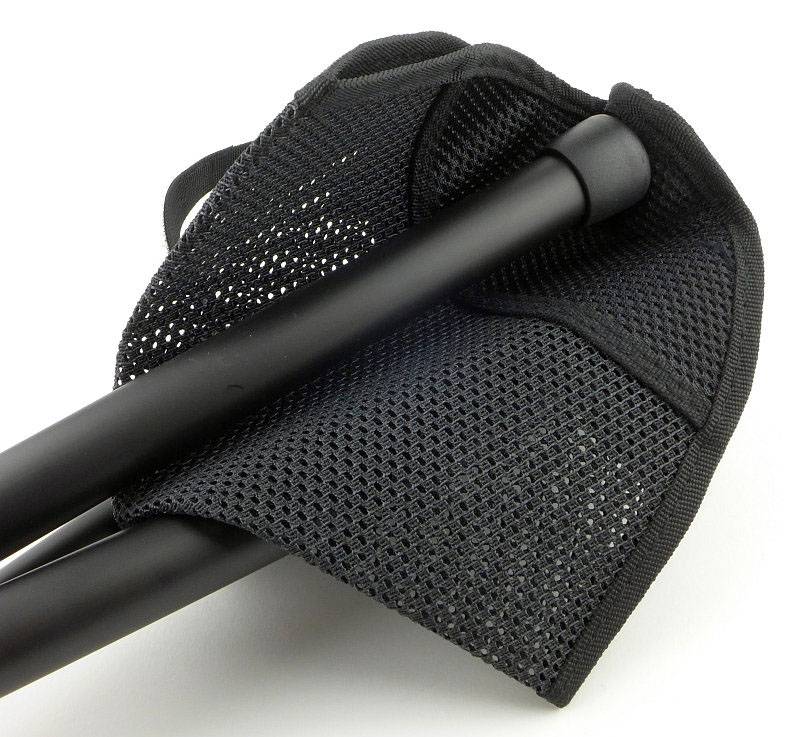 Strap released and ready to be opened. 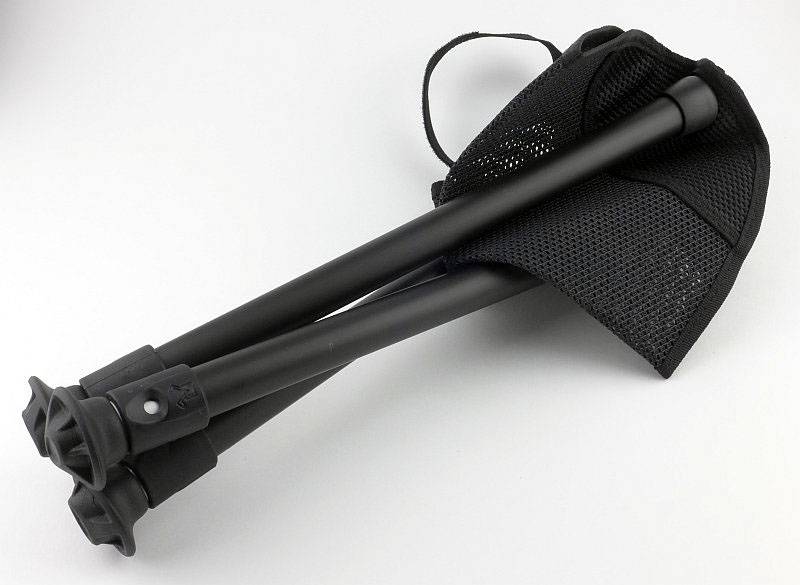 Opening out the seat, but not yet the legs. You can use the Walkstool in this configuration for a lower seating position, or to sit with a knee down to the ground. 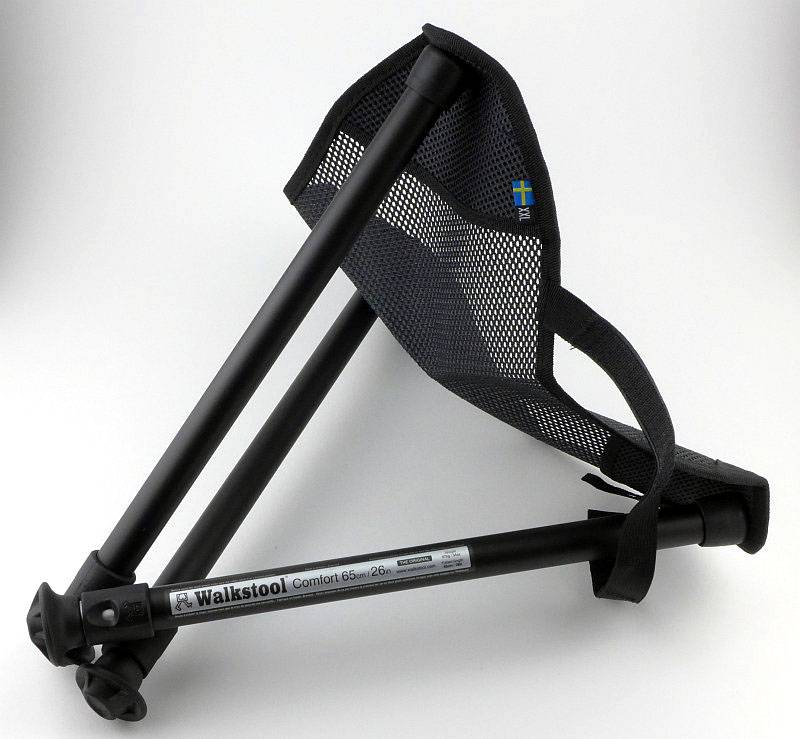 A special tri-bolt holds the legs together very strongly. Here you can see one of the leg release buttons (red) which is visible with the legs extended, and must be pressed in to allow the legs to retract. If you press the release button and pull the leg, you can remove it for cleaning. 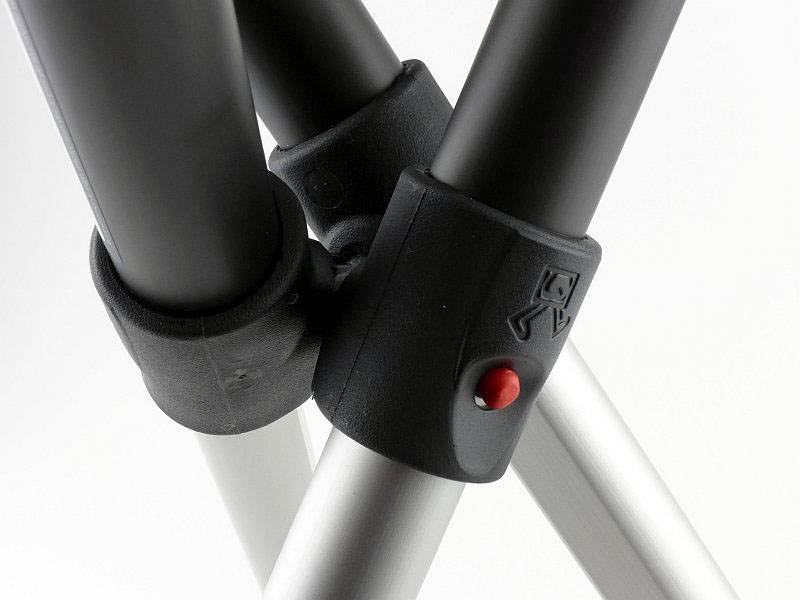 Ready to sit on the lower height. 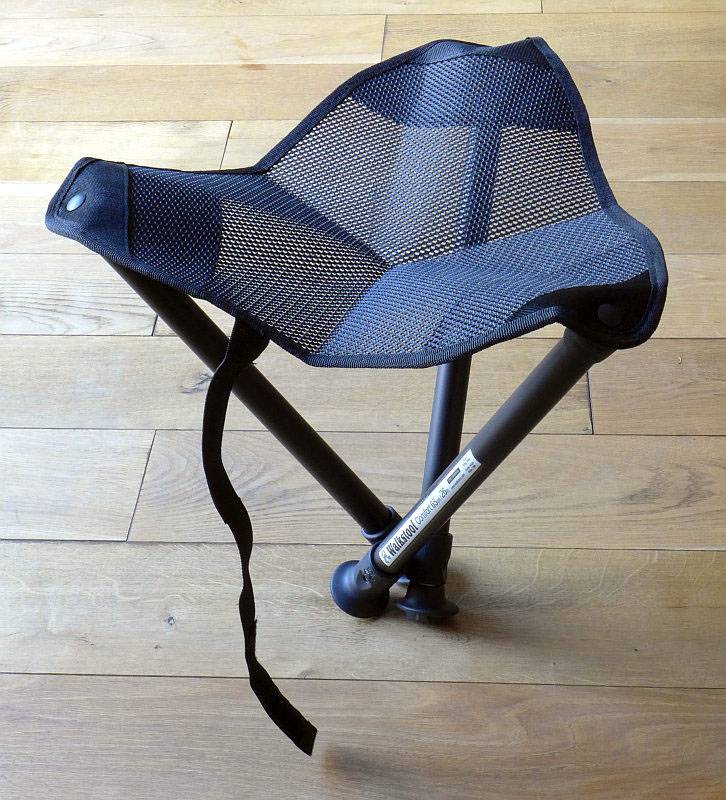 With legs extended you have a proper stool to sit on. 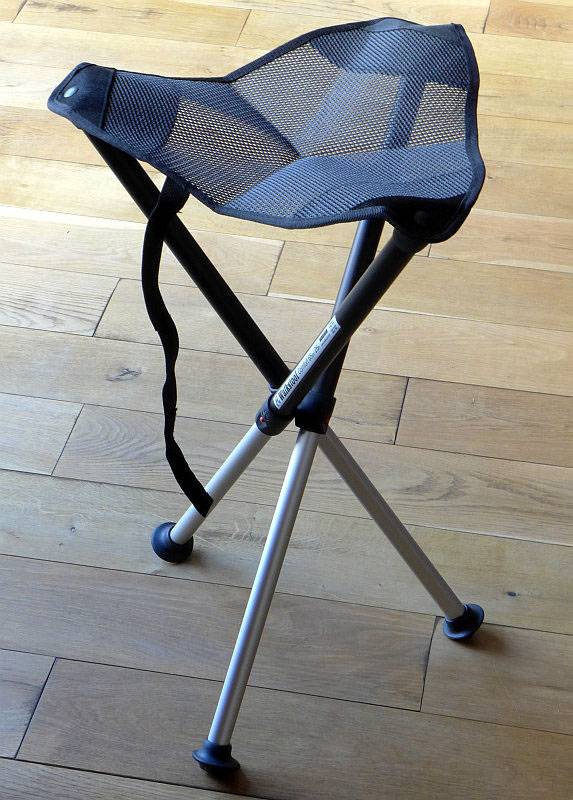 It is worth having a look at Walkstool’s video demonstration.

The first point to consider is that part of ‘using’ this stool is carrying it with you. It certainly is light enough to be an all day companion and you will want to take it with you rather than agonise over if it is worth the effort of carrying it.

I’ve carried it in three ways; firstly in the supplied bag, out of the bag and using the strap to secure it to my belt or a backpack, and finally actually fully inside a backpack.

Of these carry methods, my least favourite is using the carry bag. The strap is a string which has a tendency to want to slip off your shoulder. Not a design fault or problem, just a reason I would generally avoid this.

If I have a full size backpack I will simply pop the Walkstool inside the backpack, zip up and forget I have it with me until I want to use it. This is my preferred carry method.

Lastly the strap for folding up the Walkstool has intentionally been made longer than needed so that you can use this strap to attach it to something else. Walkstool show this being fixed to a belt, but I’ve also used it to attach the Walkstool to the outside of my backpack. Particularly useful if the backpack too small to fit the Walkstool fully inside. A minor annoyance on this subject though is that there is exposed ‘hook’ Velcro on the strap; this has a tendency to be very aggressive to other fabrics. I have used some Velcro ‘loop’ tape to cover this up, but it would be nice if this was included with the stool.

So many stools I’ve used in the past have been too short, and that makes you less stable and sitting on these becomes tiring. When looking at the Walkstool models I assumed I would find the tallest would suit me as I’m 6’2″ with relatively long legs. To my surprise, the Walkstool 75 (the largest) was too tall for me and it turns out the Comfort 65 was a much better match. If you can, try the different models, or at least consult the Walkstool size guide.

So you have it with you, and now it is time for a sit down. Extend the legs, open them out and sit in excellent comfort. I was doing a little whittling (with a Swedish knife, as it happens, the Fällkniven F1 Pro) and was perfectly comfortable and stable on the Walkstool.

There are often instances where you want to be sitting lower, but not on the ground, perhaps if you are with a group of people not so well equipped who are sitting on the ground, or if you are working with several things and have them laid out on the ground.
Using the Walkstool with the legs retracted, you have this low height stool which can rock around the central point where the legs are connected, giving you mobility and the ability to turn. 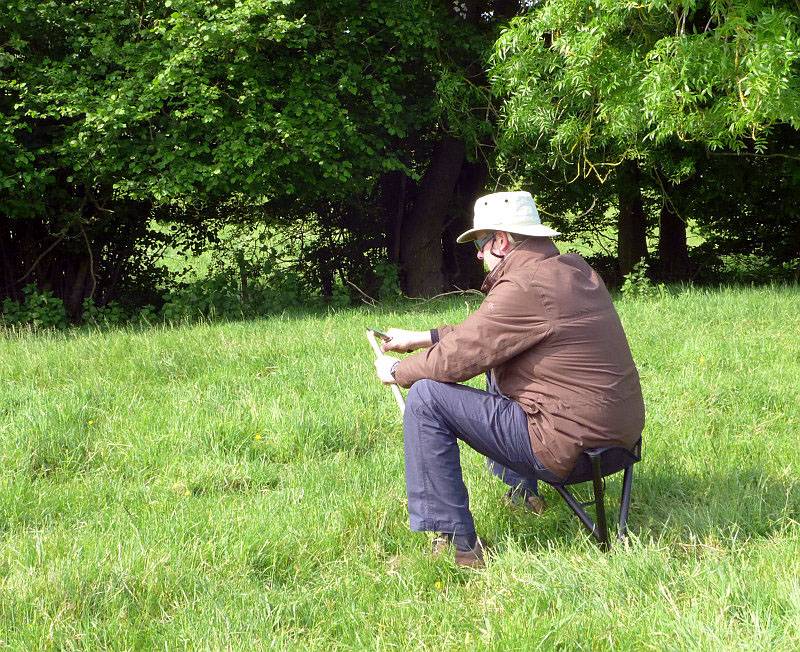 Having this dual height is more useful than I thought it would be and is a unique feature made possible by the telescopic legs.

Quite simply I would not go back to anything else having used this folding stool, as nothing else I have ever seen provides so much comfort, quality and strength in such a small light package. 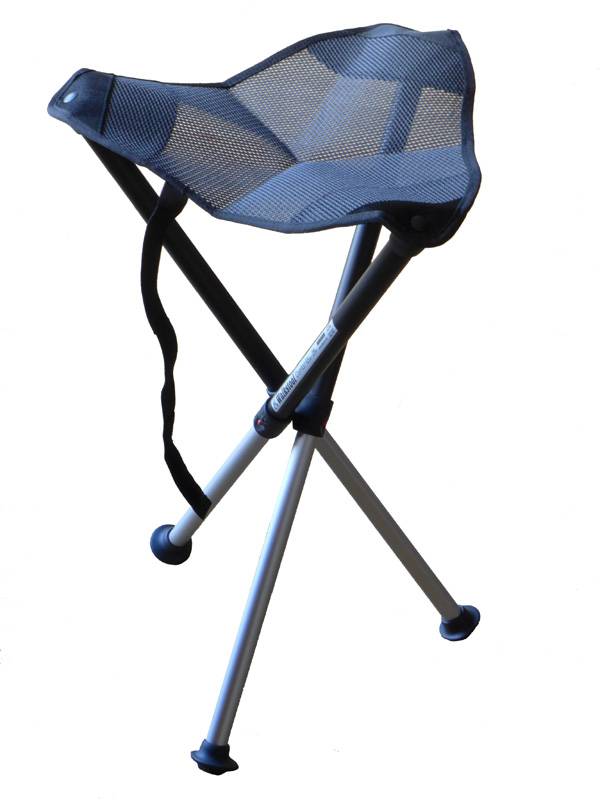 See Walkstool’s Website for the sizing guide, Walkstools holding up a car and more. This review is included on the Walkstool Testimonial Page.

(You many need to use the forum’s ‘Search’ to find the review.)