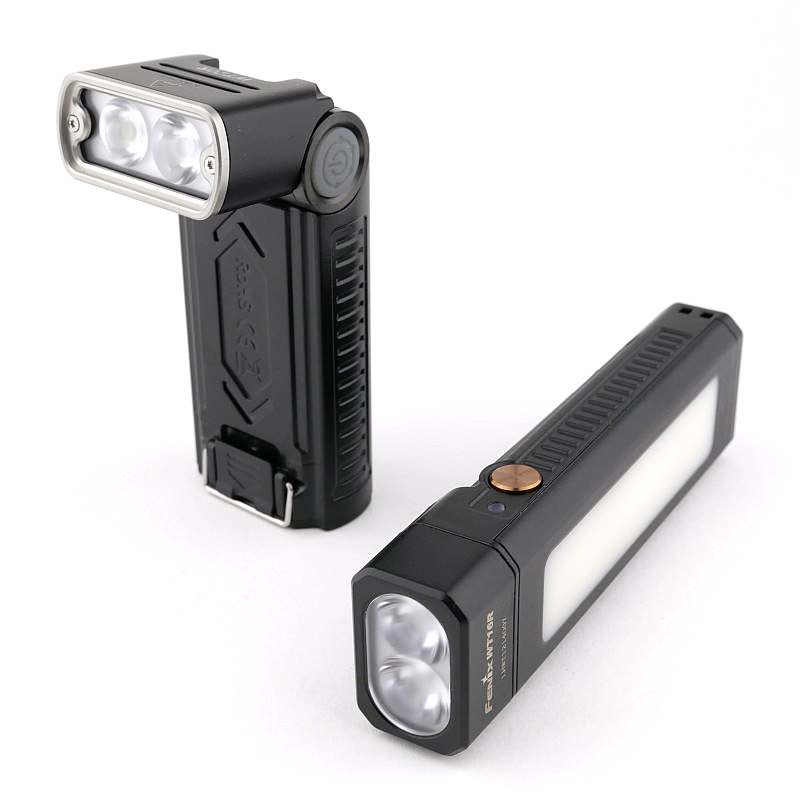 I’ve always liked functional lights, those lights that not only give you light, but give you various options for positioning and types of light. Typically they are not the mega-lumen monsters, instead with more modest outputs, but with a focus on utility. One of the latest releases from Fenix is the WT16R which compliments the existing WT20R model, and this detailed review is of the Fenix WT16R and WT20R from the ‘WT’ Work Light series. 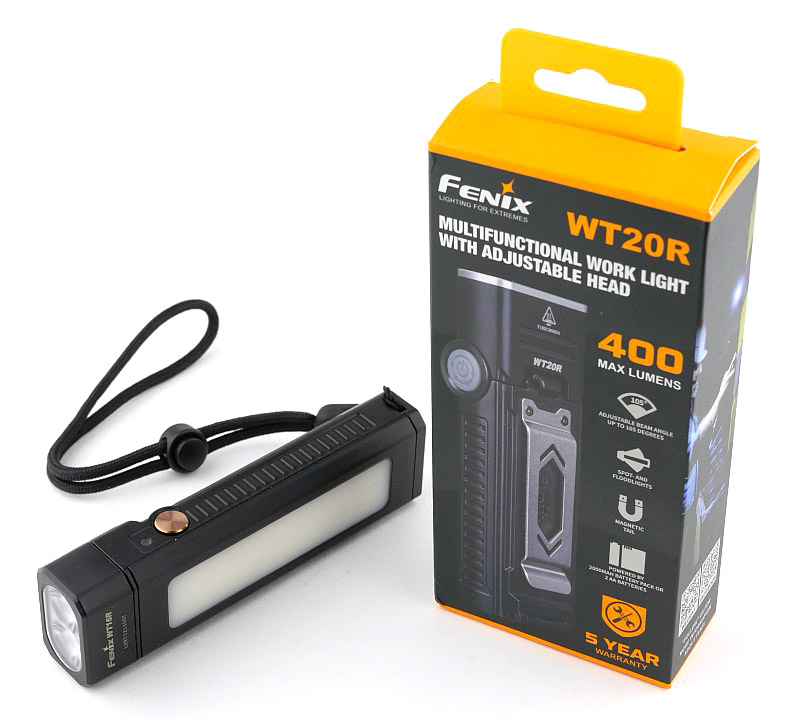 A good look round the WT16R – Things to look out for here are:
The WT16R on test is actually a pre-production model (but of the final construction), so did not have any packaging. It has a fully fixed body where nothing moves or opens, and has a non-removable built-in USB-C rechargeable cell. The WT16R has a main spot beam at the front and a large side panel to provide area flood lighting (and a flashing amber option). A clip and two magnets allow for various mounting options, and the design allows for free-standing use as well, plus it definitely won’t roll away.

A good look round the WT20R – Things to look out for here are:
An articulated head, how I love an articulated head. The WT20R has me straight away on that one alone. But then it much more; look out for the illuminated side switch, metal bezel, twin beam types and dual-fuel ability with the supplied li-ion and you can also fit it with AAs (not provided).

For each of the following galleries the exposure was set to the same to directly compare the two beam types from each light.

The WT16R runs on a non-removable built-in USB-C rechargeable cell, and the WT20R is supplied with a USB rechargeable li-ion cell but can also use AAs.

Note the Parasitic drain of the WT16R cannot be measured, and for the WT20R the li-ion and AA values differ slightly. Also note that when using AAs, the WT20R cannot output on High. 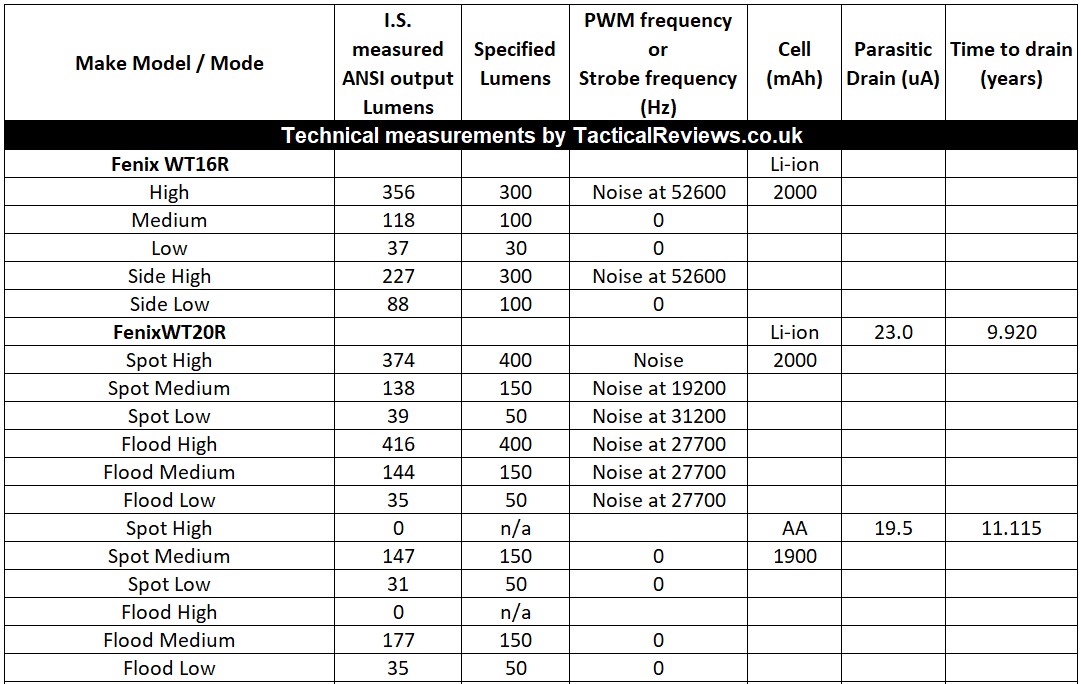 The WT16R and WT20R in use:
This gallery actually says without words most of what I want to say, so let’s start with that…

The first of those images shows the WT16R using its tail magnet to give downward facing hands-free lighting from the side panel flood light, along with the WT20R aiming at another area. Then the WT16R on the front of a boiler lighting up the control panel. Remember there is also a second magnet on the clip, so if you needed to tuck the WT16R up under something you can do this as well. Similarly you can use the spot beam if you need the light concentrated in a smaller area.

Onto the WT20R and its articulated head. The gallery has a photo showing the extreme angle range the head can be moved to, it is not just 90 degrees of motion, but 105 degrees of motion from fully straight to a slight downward angle when tail-standing it. Combined with the magnetic tail, the WT20R is a superbly ‘aim-able’ light. You can mount/stand it and then angle the head to put the light exactly where you want it, easily and quickly. You even have a choice of flood or spot beams as well.

These are true ‘working lights’. They are illumination tools, and designed such that you can use them hands-free and put them into difficult locations which you might not be able to with a headlamp.

Using side switches makes the controls very natural to use, the only minor comment I would have on this is that the side the power switch is on is better suited to right-handed use. When using the WT20R with head angled, or the WT16R’s side panel light, for left-handed use this means either using a finger curled round underneath, or a slightly switch on and twist round action. This minor point is unavoidable really, so is not a criticism, more of a consideration.

If you have one or both of these you will wonder why you struggled on with a normal light for so long, when these make mobile task-lighting a breeze. 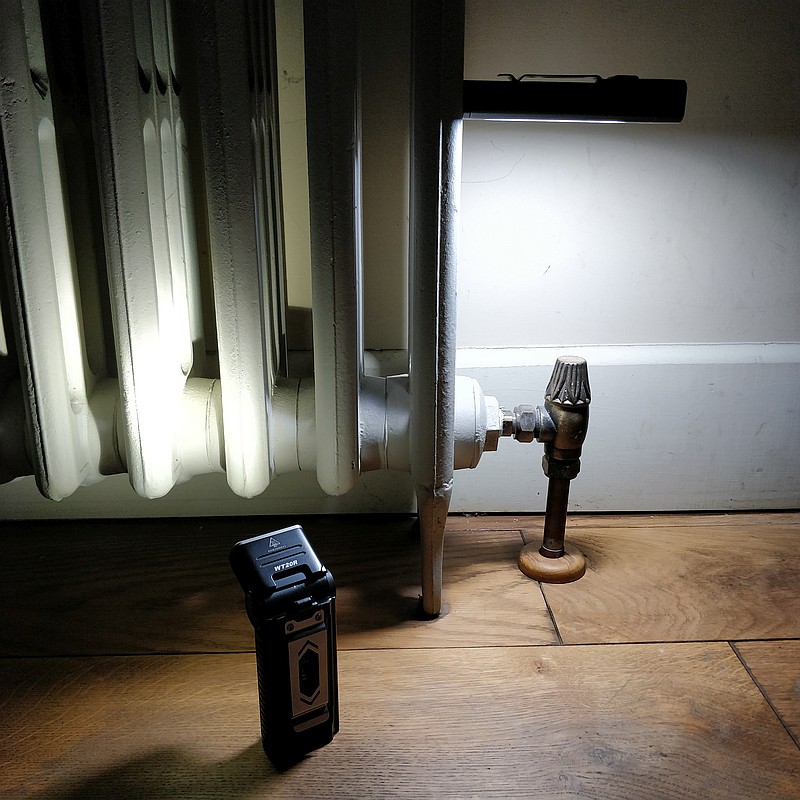